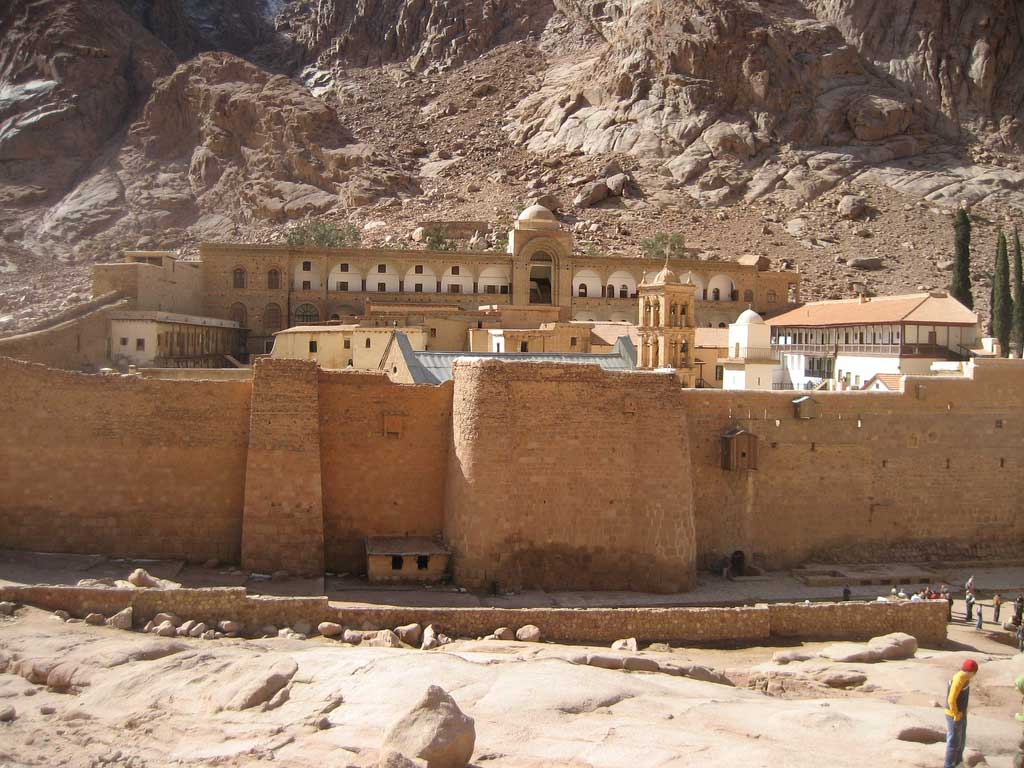 130 palimpsests, all from medieval times

Mount Horeb, Egypt. Michael Toth points at a computer screen filled with what seems to be a jumble of Arabic and Greek letters.

To get to this jumble, he has traveled from Washington to an isolated, fortresslike monastery in the middle of the Sinai Desert, home to the oldest continuously operating library on the planet.

He has helped assemble a global team of scientists that arrived with cutting-edge technology at this spot, three hours by taxi from the nearest commercial airport.

The image he has paused to appreciate is one of a steady stream coming from the room next door, where a high-definition camera is focused on one of the monastery’s rare and priceless ancient manuscripts. The manuscript rests in a cradle that looks like a chair tilted back at an angle, but with hydraulic lines and strange lights attached.

One more room over, in the makeshift command center, specialists are scrutinizing the day’s results, and the monastery’s head librarian, a wispy gray beard stretching to his stomach, waits in a red velvet chair for the next request to turn a fragile manuscript page.

“This is the first time since the 9th century that anyone has seen this,” Toth says of hints of text below the more-visible words.

The first time since the era of Viking invasions and Charlemagne.

The more-prominent, legible words are 1,200 years old and are interesting enough, but they are not what the scientists are here for. The team is really after the overwritten text from centuries earlier, last seen by the person who scraped it away to recycle the precious animal-skin parchment.

Such erased texts are known as palimpsests, and until their pages enter the imaging room, no one alive now or, in many cases for more than a millennium, can say for sure what has been hidden. The work is tedious, like carefully brushing away sand at a traditional archaeology dig, but the promise of what can be found is a powerful motivator.

This is Toth and his colleagues’ most ambitious project to date, and it is just one component of a major transformation under way in the desert. The team is working within the stone walls of the Sacred and Imperial Monastery of the God-Trodden Mount of Sinai — St. Catherine’s, for short.

For 17 centuries, the Greek Orthodox Christian monks at St. Catherine’s have protected an unparalleled trove of manuscripts. Now the monastery is in a multimillion-dollar push to physically and digitally protect its treasures and make them easily accessible, in most cases for the first time, to scholars around the world.

In the process, the monks will establish a model for the preservation of irreplaceable ancient manuscripts in a world where more and more of them are threatened by the chaos of war and revolution.

“Working with this stuff is an amazing privilege,” Toth says.

St. Catherine’s head librarian, Father Justin, came to Washington in 2008 to learn whether Toth and his colleagues might be able to offer some help. Father Justin had been working to digitize the monastery’s huge manuscript collection using standard photography for 10 or so years. But the time had come to explore the archaeology of the palimpsest subset of the collection, the hidden words that standard photography can’t reveal. Toth was managing a group that had made a global name for itself in this sort of imaging detective work.

In 1999, Toth, then a policy director at the National Reconnaissance Office, which designs spy satellites and imaging systems, read about an interesting project at Baltimore’s Walters Art Museum.

An anonymous bidder had paid $2 million at auction for what, on the surface, was a prayer book handwritten in Europe in 1229. But the value came from what the prayers obscured: 10th-century copies of key works by the famed Greek mathematician Archimedes, including the only known copies of some.

Scholars had discovered the hidden text in 1906, but they couldn’t read much of it. After the new owner — still known publicly only as Mr. B — took possession, he agreed to lend the palimpsest to the Walters to try to reveal the rest using advanced-imaging techniques.

Toth saw connections between high-tech surveillance imaging and what it was going to take to pull off proper imaging of the palimpsest. On a whim, he emailed the museum’s director and offered his services. Soon enough, Toth was volunteering as a project manager, working with Will Noel, a Walters curator overseeing the project, to build the necessary team of scientists.

The 10-year project pushed the limits of existing technologies, photographing pages using special lights and filters in ways that allowed computerized enhancement of the lost text. It was wildly successful, and by eight years in, Toth had retired from the government to pursue this new passion full time. He is now 55.

Techniques the team developed, for imaging and for managing the massive volume of data such work generates, became standards in the field, and the group began receiving requests to take on new projects involving palimpsests or text lost in other ways, such as through water damage.

Toth and the team — all independent specialists — worked with the Library of Congress to reveal hidden aspects of Thomas Jefferson’s copy of the Declaration of Independence, such as the fact that the founding father had erased the word “subjects” and replaced it with “citizens.” As requests for help piled up, the team went global, working in Europe and the Middle East.

By 2008, Father Justin was one of the people looking up the team. The challenge he presented would be nothing like any of the group’s previous projects. Besides the difficulty of getting equipment to the desert and obtaining proper approvals, there was the size of the collection. At that point, Toth and team had imaged perhaps a couple of hundred pages. St. Catherine’s had thousands.

Since at least the 4th century, monks have lived in a valley at the base of Mount Horeb, which leads up to what long tradition says is the Mount Sinai of biblical fame. They came to be close to what they believed, and many today believe, was the burning bush from which God spoke to Moses, as described in the Old Testament.

In the 6th century, the Emperor Justinian I called for construction of a monastery at the site. Today, pilgrims and tourists encounter the 60-foot-high fortress walls and basilica built to fulfill his decree.

The monastery holds at least 130 palimpsests, all from medieval times.

With the chance to study the monastery’s palimpsests, the experts hope to better understand whether there are discernible patterns in the decisions people made about what texts they scraped away.

In some cases, a single manuscript leaf might include three or more layers of text, all from different centuries. And sometimes pages from one scraped manuscript were taken apart and used in multiple other manuscripts, creating puzzles to be pieced back together.

Soon after Father Justin’s fact-finding mission to the Walters Museum, Michael Phelps, founder and executive director of the Early Manuscripts Electronic Library in Los Angeles, signed on to lead the St. Catherine’s palimpsest project, including fundraising.

The Arcadia Fund, a British-based nonprofit focused on protecting cultural knowledge, in 2010 agreed to provide $2.1 million for five years of imaging.

Late last year, the team returned to Sinai to begin its work in earnest.

So far, the technological challenges at the monastery have proved surmountable. One hurdle besides a multiyear workload remains. Some of the manuscripts are so fragile that they can’t be handled without specialized facilities that the monastery doesn’t have. But if all goes well, a $4 million renovation will soon transform one wing of the monastery to fill this and other needs. The St. Catherine Foundation, an organization Britain’s Prince Charles launched after a visit in 1995, is raising money.

Though the group hopes construction can begin this year or next, a date hasn’t been set.

To date, the team has imaged hundreds of pages from 14 palimpsests. Ultimately, these images will go to a team of 18 scholars with expertise in an array of languages, led by Claudia Rapp, a medieval-text specialist from the University of Vienna.

Eventually, the images will be available to all scholars around the world through an online database overseen by the monastery.