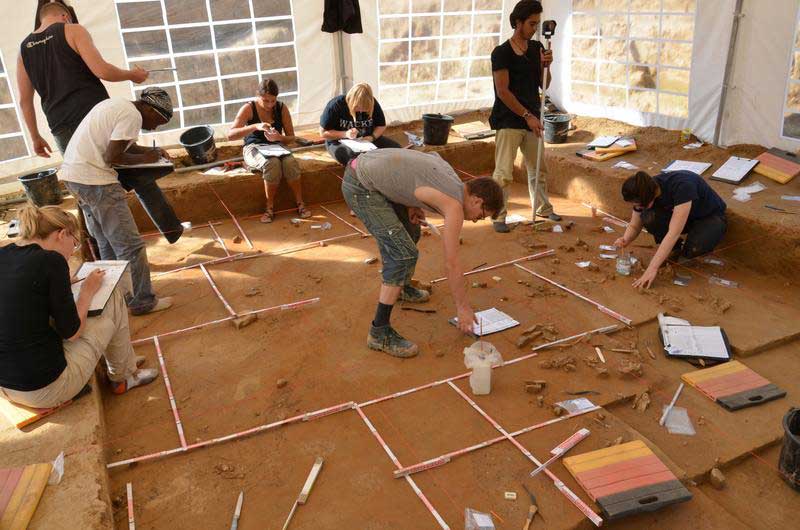 In an international co-operation project, archaeologists from the Monrepos Archaeological Research Centre and Museum for the Evolution of Hominin Behaviour, part of the Römisch-Germanisches Zentralmuseum (RGZM) and the Landesamt für Denkmalpflege and Archäologie in Saxony-Anhalt are excavating the 35,000 year old site of Breitenbach, close to Zeitz in Saxony-Anhalt. Other co-operation partners are the Faculty of Archaeology at the University of Leiden (NL), the Ludwig Boltzmann Institute of Archaeological Prospection and Virtual Archaeology (ArchPro) in Vienna, the Institute of Geoinformatics i3mainz of the University of Applied Sciences in Mainz as well as the Institutes of Geosciences at the universities of Mainz, Tübingen and Cologne.

During this year’s campaign, site directors Dr. Olaf Jöris and Tim Matthies and their team found the oldest evidence for clearly distinct working areas which are interpreted as standardized workshops for working mammoth ivory. It was possible to identify a zone where pieces of ivory were split into lamella, as well as a second area where the pieces had been carved and their waste had been discarded. Some ivory beads and rough outs of unfinished products were also found amongst this debris, alongside several other ivory objects, including a decorated rod and fragments of a three-dimensionally modified object, very likely an object of art. The manufacturers were early modern humans similar to ourselves, who obtained mammoth ivory which had probably lain around at this site for some time, either from the carcasses of mammoths which had died here naturally or from the bodies of the victims of expert hunters. In the case of the latter scenario, the mammoths could have been hunted by modern humans or even by Neanderthals, since Neanderthals had only become extinct a few thousand years before the site was occupied by modern humans.

The clear spatial deposition of the finds in different working areas allows us to draw conclusions about the use of space at around 35,000 years ago, a concept apparently still unknown to Neanderthals.

The settlement at Breitenbach covers an area of at least 6,000 m2 and perhaps as much as 20,000 m2, making it one of the largest sites of the younger Palaeolithic period (Upper Palaeolithic) known to date. The first archaeological excavations were carried out in the 1920’s; the more recent campaigns have investigated some 70 m2 of the site. Many students from 25 countries have helped to excavate the site. Close to 3,000 finds have been recovered so far in this year alone.

Finds comparable in age to the ones from Breitenbach are most commonly found in caves, where the utilisation of space was governed by the natural formation of the cave walls. This led to restrictions on, and compromises by, the cave inhabitants. In addition, the same areas of caves were repeatedly inhabited over a long period of time, superimposed over and often blurring details of earlier settlement remains. In the open, as at Breitenbach, humans had the possibility to organise their space more or less free of restrictions or preconditions and establish structures which allow us to reconstruct the daily life of this period at the highest resolution.

Field work at Breitenbach has provided new insights into the spatial activities of people at the beginning of the younger Old Stone Age (Upper Palaeolithic), especially into the spatial organisation of settlement sites and thus of daily life during the Aurignacian at around 40,000-34,000 years ago. This is ultimately of great importance for our understanding of the roots of modern human behaviour itself, since indications for “organizing oneself”in a well-defined and regulated manner which we are accustomed to today, are recognized for the first time worldwide through the new features discovered at the site of Breitenbach.

Due to the unparalleled large size of the settlement area, the Breitenbach site offers a unique opportunity to undertake a detailed investigation of an open site of the Aurignacian period. This will enable us to gain new insights into the complexity and spatial organisation of an early Upper Palaeolithic settlement site, where evidence of personal adornment, art, music or even burials, which are to date hardly known from this period, can also be expected.