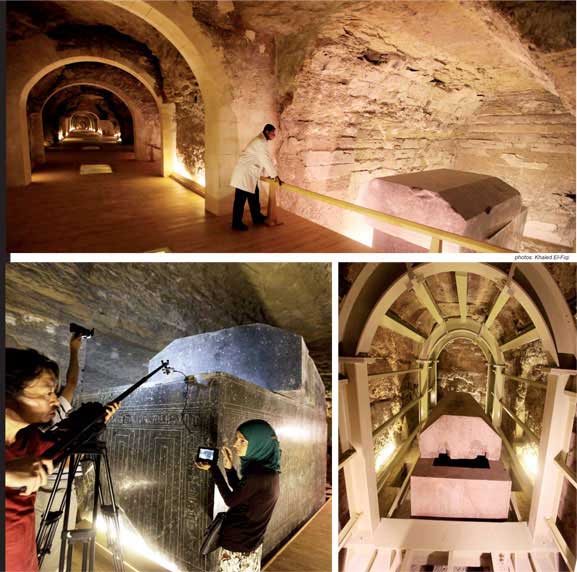 Sacred bulls for the tourists

Official inauguration of the Serapeum

The centre of activity at the Saqqara necropolis last Thursday was the area on the northwestern side of Djoser’s Step Pyramid. A huge, white air-conditioned tent was erected in the parched desert to welcome dozens of foreign and Egyptian journalists, photographers and TV presenters together with governmental officials, archaeologists and restorers as they witnessed the official inauguration of the gallery of Apis tombs known as the Serapeum.

The Serapeum, for long one of the main tourist attractions at Saqqara, has been closed to the public since 1986. No tourists have been allowed to wander awestruck through the splendid rock-hewn tomb chambers, each with a huge sarcophagus that once held the remains of a sacred Apis bull. One began to wonder when, if ever, the Serapeum, would reopen and it would again be possible to meander along the 200-metre corridors flanked by 64 vaulted burial chambers with granite, limestone and sandstone sarcophagi.

The Serapeum tombs were excavated between 1851 and 1854 by French archaeologist Auguste Mariette. He discovered the two parts of the Serapeum: the Simple Vaults that contained the tombs of the Apis bulls from the period of the Eighteenth to the Twenty-sixth Dynasties (these were later buried in sand and remained covered for more than 100 years, and are currently still under restoration); and the Great Vaults, which were open to the public until 1986 and have now been restored. The Great Vaults consist of a long corridor lined with 24 vaulted Apis bull tombs still with granite sarcophagi and date from the Twenty-sixth Dynasty to the Graeco-Roman Period.

The Serapeum at Saqqara was the burial place of these sacred bulls, which were living manifestations of the ancient Egyptian deity Ptah. According to Mohamed El-Beiali, head of the ancient Egyptian Section at the Ministry of State for Antiquities (MSA), it was believed that after death the bulls were immortalised as Osiris Apis, which later in the Hellenic period was shortened to Serapis. The most ancient burials found at this site date back to the reign of Amenhotep III.

Beiali told Al-Ahram Weekly that in the 13th century BC during the reign of Pharaoh Khaemwese, son of Ramesses II, a tunnel was dug through the overhead mountain. Side chambers were dug out, each designed to contain a large granite sarcophagus weighing up to 70 tonnes to contain the remains of the bulls. This tunnel, the Simple Vaults, were rediscovered in 1982 by an Egyptian team during restoration work. The team also found a number of stelae, reliefs and engravings written in Hieratic. A false door was also found, as well as some items from the funerary collection of Khaemwese.

A second tunnel, approximately 350 metres in length and five metres high, was dug during the reign of Pharaoh Psammetik I and later used by the Ptolemaic dynasty and is known as the Great Vaults. The long boulevard leading to the ceremonial site, flanked by 600 sphinxes, was probably built by the Twenty-sixth Dynasty pharaoh Nectanebo I.

Beiali said it is known that the worship of the Apis bull continued for a long period, since the historian Herodotus mentioned that the Persian king Cambyses witnessed a celebration in honour of the Apis bull at Memphis in 525 BC. The last burial of the bull dated from the reign of Queen Cleopatra VII.

Restoration of the Serapeum

“Throughout different eras the fragile nature of the rock in which the Serapeum was carved has suffered various stages of deterioration,” says Hussein Fahmi, a former professor of engineering at Ain Shams University who drew up the restoration plan at the Serapeum.

He explained that in the 1980s, when steps were taken to develop the Saqqara Plateau with paths and a rest house with all necessary facilities, the quantity of water used for these operations seeped into the bedrock and caused wide cracks. The rock split in the areas where the ancient Egyptians had dug tombs, and one of the most seriously affected areas happened to be the Serapeum and the great galleries where for generations the sacred Apis bulls were buried.

Archaeologists erected wooden scaffolding to maintain the roof of the Serapeum, which was partially fractured.

However, Fahmi said, it was regrettable that military training exercises and explosions carried out in the Dahshur quarries a few kilometres away from Saqqara had led to the instability of the rock, which moved from its original location.

Despite several meetings between archaeologists, restorers of the Supreme Council of Antiquities (SCA) and engineering and technical experts, the restoration techniques being used gave rise to controversy. Two divergent views were presented on the restoration so far carried out. One faction suggested erecting iron shields at the 24 galleries which were the most seriously undermined and leaving them in place even after the completion of restoration. The other opinion was to remove and replace them with steel frames, which were as strong as iron, but less intrusive.

Fahmi, who supported the iron shields, considers it the appropriate method to save the Serapeum from collapse. “I refute the suggestion that the rock itself should be consolidated, because it has already absorbed water which is, moreover, spread throughout the galleries,” Fahmi said, adding that in the early 1950s the then Egyptian Antiquities Organisation carried out major restoration work on the latter plan — the consolidation of the walls with steel frames — but that it was a failure. Fahmi added that according to the international criteria of UNESCO, ICOM and ICOMOS, such shields had been deemed satisfactory in other areas where urgent action was needed because of deterioration.

SCA archaeologists supported the iron shields, pointing out that earlier restoration in the 1950s had actually increased the fissures on the walls, and that the iron shields were appropriate to save further deterioration.

The German Egyptologist Reiner Stadelmann voiced another opinion. He said that he was shocked when he saw the vaulted iron shields installed in the Apis tombs.

“They can only be regarded as a temporary solution,” he says. “That is to say, they should not be considered part of the overall restoration plan but merely an instant necessity to stabilise the rock, which could then be treated before being removed.”

In view of such contrary opinions at that time, Zahi Hawass, the former Minister of State for Antiquities (MSA), called on UNESCO to send a team of experts to evaluate the work already carried out and help draw up an overall plan of action for the progressive restoration of the tombs.

After three UNESCO’s visits and inspection tours, the committee approved the Iron shields and actual restoration work began in 2001.

Mohamed El-Sheikha, head of the Projects Section at the MSA, said that the restoration was carried out in the Great Vault gallery of the Serapeum while the Simple Vault gallery was still under restoration. The work was done in three phases with a budget of LE12.500 million. The first phase was an archaeological and geophysical documentation of the galleries, tombs and sarcophagi; the second included the technical and engineering studies as well as the required analysis of the bedrock. The third and final phase, Sheikha said, included the consolidation of the tombs walls using iron shields, and of its ceilings with injections. New ventilation, security and lighting systems have been installed.

Official opening and history of discovery

“The official opening of the Serapeum is a starting point for a series of forthcoming inaugurations of several monuments and archaeological sites in Egypt, such as a group of noblemen’s tombs on the Giza plateau and the Hibis Temple in the New Valley,”MSA Minister of State Mohamed Ibrahim told reporters at the press conference held at the Serapeum. He went on to say that the MSA was very keen to inaugurate the site, as well as two other noblemen’s tombs on the Saqqara necropolis, before the start of the Egyptian tourism season in order not only to open up new tourist attractions but to “send the message that Egypt is safe and exerts all efforts to preserve its archaeological heritage.”

He also called on people everywhere to come to Egypt and visit its unique archaeological sites.

In his speech, Ibrahim expressed his gratitude to those who had worked for several years to restore the Serapeum and make this dream come true.

“I am not the one who masterminded the job, but I was one of those who witnessed its initial restoration work in 1986 as an archaeologist working in the Projects Section,” Ibrahim said. He continued that in 1986 the working team consolidated the Serapeum’s walls with wooden scaffolding, cleaned all the void spaces and rediscovered the Simple Vaults discovered in 1853 by Auguste Mariette.

Ibrahim said that when Mariette came to Egypt in 1851 to document and list Coptic manuscripts in monasteries, and not to collect them as it was rumoured, while waiting for permission from the Patriarch of the Coptic Church to allow him to execute his job he took the time to explore several archaeological sites in Cairo and Alexandria.

On this tour, Mariette saw several engravings and columns bearing the name of Osiris Apis, and when asked about the name archaeologists told him that it was the god of Saqqara. Mariette headed for Saqqara, where he stumbled upon a sphinx sticking out of the shifting desert sand. He cleared the sand, followed the avenue of similar sphinxes and discovered the Apis bull tombs.

During his exploration work inside the galleries, Mariette found a large funerary collection of mummified bulls, a gold statue of the Apis bull and small niches with votive paintings used by ancient Egyptians as offerings. Unfortunately, Ibrahim claimed, Mariette removed most of these paintings as well as the gold statue and sent them to the Louvre Museum in Paris. Very few were left in Egypt. Over the course of the 19th century several of these paintings were offered to European museums, but thanks to the Egyptian team who rediscovered the Simple Vaults in 1982 and unearthed a large collection of similar votive paintings, these are now on display at the Egyptian Museum in Tahrir Square.

The Old Kingdom mastaba tombs of Mereruka and Ptahhotep, two of Egypt’s most powerful officials at the time when the influence of local state noblemen was increasing in wealth and power, have also been inaugurated after restoration. Mereruka bore several titles, the most important of which were the Chief Justice and Vizier and inspector of priests and tenants of the Pyramid of Teti. His tomb is the largest in the Saqqara necropolis, containing 31 rooms of which 21 were for him and the remaining 10 were for his wife Seshseshet and his son Meriteti. The tomb was found in 1892 by the French archaeologist Jaques de Morgan, and is famous for its fine reliefs depicting the deceased in a different position with his family and deities as well as scenes of his daily life and customs of the Old Kingdom such as hunting and crafting.

The most beautiful reliefs are those featuring hippopotamus hunting and fowling in the marshes, as well as those depicting interesting crafts and industries such as carpenters, sculptors, vase makers, metal workers and jewellers.

The tomb of Ptahhotep, the city administrator and vizier during the reign of the Fifth-Dynasty king Djedkare Isesi, is considered the most beautiful of all the tombs at Saqqara. Its distinguished depictions show the tomb was devoted to Ptahhotep and is son Akhthotep, who was also a vizier. It has a separate burial chamber and chapel for each of the deceased. The hunting and farming scenes in Ptahhotep’s part of the tomb are particularly well preserved, still retaining lots of its detail and original colour. It is also interesting because not all of the reliefs were finished, with some still in various stages of completion. The different stages of process show the initial sketches corrected in red by a master artist, before areas were chiselled away, cut in detail, and finally painted to produce the finished product.