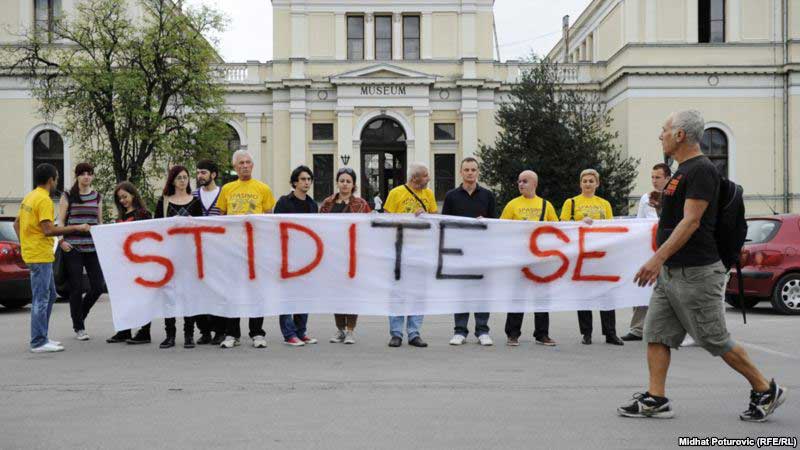 The National Museum of Bosnia-Herzegovina closed on Thursday after 124 years – the victim of a political funding crisis that is devastating the divided nation’s cultural institutions.

Bosnia has already lost its national art gallery this year. And international campaigners say at least five other cultural institutions are at risk. They include the National and University Library, which was attacked and reduced to rubble during the 1992-95 war.

Last month the library’s electricity was cut off. On the same day the director of a projected national contemporary art museum announced his resignation saying he had nowhere to put a collection – including works by internationally renowned painters such as Jannis Kounellis – that was put together after the war by artists and benefactors.

The museum’s deputy director, Marica Filipovic, said it had survived two world wars and the last one without ever closing totally. “But it seems it will not survive the peace,” she said.

The museum’s pride is the Sarajevo Haggadah, an illuminated 14th-century Jewish manuscript which has been valued at $700m. Other treasures include a 250,000-volume library, an extensive display of folk costumes, its renowned entomological collection and unique Neolithic ceramics from the internationally famous excavations at Butmir nearby.

“The explanation that is being given is budgetary, but the issue is political,” said Azra Aksamija, a Sarajevo-born artist and academic who is assistant professor of art, culture and technology at the Massachusetts Institute of Technology (MIT).

The US-brokered Dayton accords, which stopped the fighting, entrusted Bosnia’s leading cultural institutions to a state government whose powers and funding have since been eroded by the mutually antagonistic communities.

“The institutions were left in a legal vacuum and so it was unclear who should give them money,” said Aksamija, a member of the editorial board of cultureshutdown.net, a website devoted to publicising the issue.

“The state of Bosnia-Herzegovina failed to transfer a single convertible mark [the Bosnian currency] into our account in 2011, while the federation terminated is financial support in 2012,” said Ismet Ovcina, the director of the National and University Library.

The Vijecnica, the grand Moorish-revival building in which it was housed, is being rebuilt at a cost of €13m. But the library, which was rehoused in a former Austro-Hungarian army barracks, has managed to survive largely because of intermittent local authority handouts.

Its heating was turned off on 6 January. And after the electricity went on 26 September, Ovcina announced he was suing the state. “We have no other choice,” he said in a statement.

Day-to-day power in Bosnia is exercised not by the state, but at the level of its so-called entities: one for the Serbs; the other a federation of often mutually suspicious Croats and Bosniaks (predominantly Muslims). The entity administrations have been keen to promote ethnically or religiously defined cultural bodies of their own.

As a report commissioned by the Council of Europe noted: “After the war the different cultural groups, who define themselves as nations, have all wanted their own national cultural institutions with the Croats and Serbs asserting that the existing institutions, all of which are based in Sarajevo, increasingly represent Bosniaks.”

On the contrary, said Aksamija, institutions like the National Museum were “witness to the fact that cultural cross-fertilisation can work and be fruitful”. She called the neglect of state-level cultural institutions “the continuation of a sort of silent war against multicultural values”.

According to cultureshutdown.net, the institutions at risk of closure, apart from the National and University Library, include Bosnia’s Historical Museum, its National Film Archive, the Museum of Literature and Theatre Arts and the National Library for the Blind and Partially Sighted Persons.

Last year a conceptual artist, Damir Niksic, occupied the National Art Gallery in protest at its approaching closure. But, in general, the reaction to the gradual deterioration of Sarajevo’s cultural treasure houses has been one of indifference.On Tuesday a demonstration was called to protest against the imminent closure of its most important museum. Approximately 40 people took part.