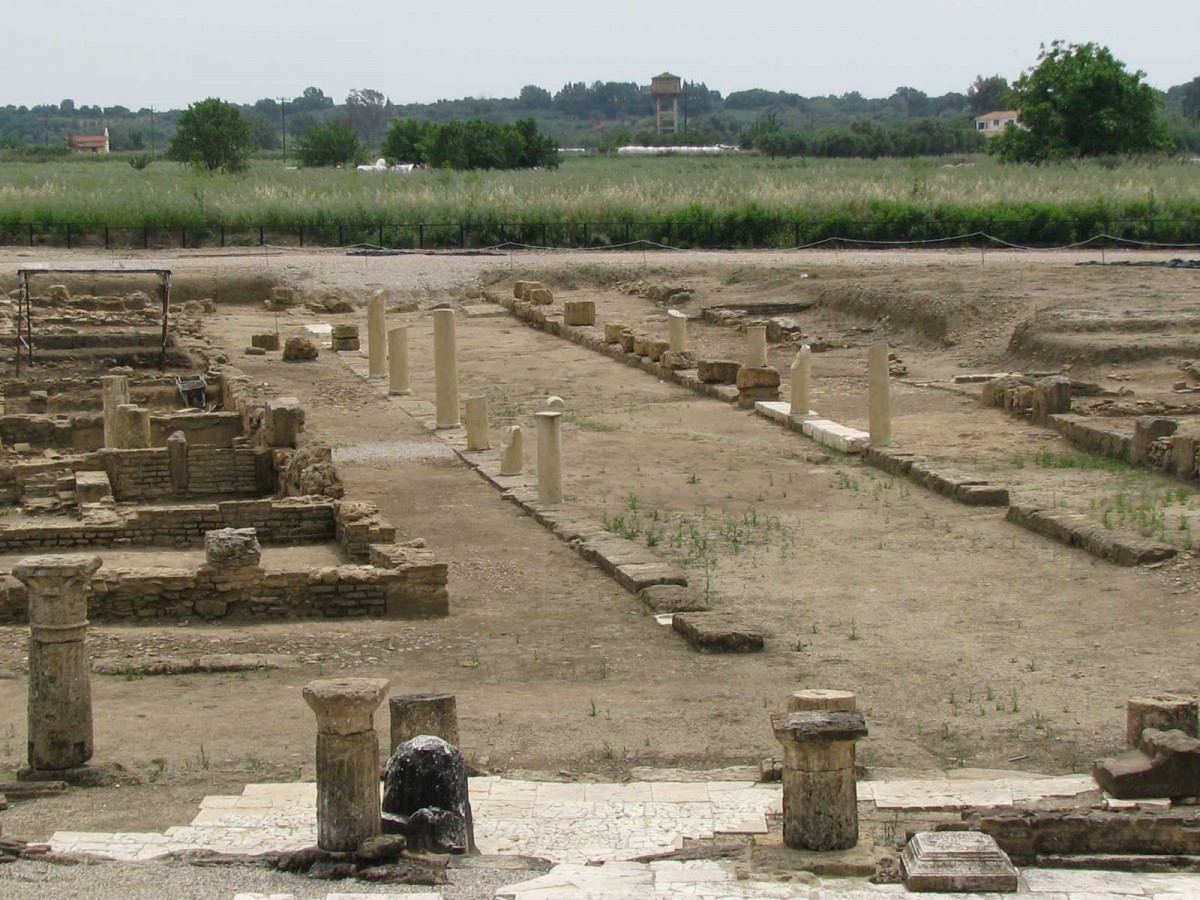 The work of the 7th Ephorate of Prehistoric and Classical Antiquities in 2010-2011 was presented last Saturday in the Conference and Exhibition Center SPAP.

Last year, due to lack of sponsorship, the event had been cancelled, but this year the rich and multifaceted work of the Eleia archaeologists could no longer remain unknown. Director of the 7th EPCA Georgia Chatzi presented the activities of the last two years in the packed hall of the conference center.

The finds in brief

Ancient Olympia (sanctuary surrounding area): In the framework of the construction works of the Eleia water supply from the river Erymanthos, at Olympia, in 2010 the archaeologists revealed: a) the remains of a water supply pipe and ruins of a Roman building at the foot of Mount Kronos, b) a Mycenaean chamber tomb with shaft burials at the foot of Kalosaka hill, c) two Mycenaean chamber tombs and a burial pithos with no grave goods in the area of Trani Lakka at the northeastern side of the Archaeological Museum of Olympia.

The team carried on excavations of the building remains during 2011 in the area of Mount Kronos, in the framework of works conducted for the Olympic Botanical Garden. The area is of great archaeological interest, as ruins of buildings belonging to at least two chronological phases (Roman and Classical times) containing plenty of finds, pottery, bronzes, stone artifacts, coins and inscriptions came to light.

Stafithokampos (2010): At the Lakoula Stafithokampos site of Andravida-Kyllini, during construction works, two burial pithoi were found containing rich burial goods. The content of these pithoi (two clay women figurines and ten pots, mostly “Eleian” lekythoi, all of which very well preserved) is dated to the 4th century BC. The finds belong to the broad cultural spectrum of an extended cemetery, that had been investigated by the Ephorate in 1993 in the centre of Stafithokampos community, and attest to a flourishing settlement or a small city in the surrounding area of the Eleia capital.

Koryfi (2010): At the “Triantafyllia” site an extended Mycenaean period settlement has been examined, the first known one in Eleia containing a mansion-like structure. At a small distance, a country house of Hellenistic-Roman era was revealed, connected with its contemporary cemetery near the chamber tombs of the area.

Mageiras (2010): Within the Mycenaean cemetery at Mageiras Olympia (“Kioupia” site), another chamber tomb, which belonged to a warrior, has been investigated. The man had been buried with his weapons (spear, sword, greaves). Among the important finds of the tomb, there is a big pictorial crater with a chariot-scene, as a burial stele.

Persaina (2010-2011): In 2010, the Ephorate has examined six intact Mycenaean chamber tombs at the “Ayios Georgios” site. The tombs contained high quality pottery dating from the Sub-mycenaean to the early Geometric period. This is a new site in the map of Mycenaean Eleia.

In 2011, due to illegal excavation activities, two chamber tombs were located. The first was found looted. Within the chamber, a burial pit that hadn’t been looted contained a second burial with two sculls. Based on the few burial goods, bronze tool, piriform jar, “false-neck” amphora, the tomb was dated to the 13th-12th centuries BC.

Klindia (2010): Another illegal excavation attempt at the site “Vouzani or Vouzeni” in the municipality of Klindia at Pyrgos, led to the discovery of three chamber tombs, that belong to the Mycenaen cemetery located by the Ephorate in 2005. Nine chamber tombs were investigated. Five of them were looted. The few but significant finds date back to the 15th-13th centuries BC.

Vresto (2011): A destructed and looted burial monument was revealed at the site “Ayioi Taxiarches”. In the burial space there was a burial facing west, accompanied by a bronze ring of the 12th century AD. At the western side of the burial monument three looted cist tombs were revealed.

Kaukania (2011): The excavation continued at the site of “Karavas” in 2011, revealing another intact Mycenaean chamber tomb, with rich burial goods. The cemetery of the site dated to the 12th-11th century BC.

Excavations in Ancient Elis bring to light ancient buildings, mostly in the area of the Agora. The Ephorate has carried on the restoration of the revealed buildings, as well as conservation works and documentation of the rich finds. Among the finds there is a part of an impressive mosaic floor decorated with dragons in a heraldic manner.

Peneia (2011): Brief excavation survey in a plot at “Latta” site has revealed a small Mycenaen chamber tomb, containing a burial and a secondary burial. The pottery found contains “false-neck” amphorae, alabastra and piriform jars. Due to these finds the site is for the first time characterized as Mycenaean (12th-11th centuries BC).

Perivolia Figaleias: During 2010-2011, the systematic excavation continued by the Director of the Ephorate G. Chatzi and under the supervision of the archaeologist K. Nikolakopoulou and Archaeology student M. Petraki. The cult statue base was put back at the center of the “Cooper temple” after it had been restored in the workshops of the Ephorate. The finds around the base and under the foundation of the building prove that it has been in use during the Archaic period.

In collaboration with Japanese scientists of the Kumamoto University a geophysical prospecting of an area close to the ancient agora of Figaleia, and the topographic and photogrammetric survey of the walls of the ancient city and other monuments was carried on.

Geraki: During 2010, in the framework of the Eleusis-Corinth-Patra-Pyrgos-Tsakona highway construction, a group of burial pithoi was investigated containing finds of the 6th century BC (black-figured lekythoi).

In the same area, other burial pithoi were found in 2011, among which a giant one of 2,35 m. height, that contained 4th century BC pottery.

Kapeleto: In 2010, two tile-covered and a shaft grave with no burial goods were investigated. Also, five burial pithoi with rich content dating from the 4th century BC.

Vartholomio: a) In 2010 the survey of the monumental chamber tomb at the “Katsivery” site and of the 25 m. dromos was continued. B) In the framework of the replacement of water supply pipes, traces of settlement from the 5th century BC have been found, along with settlement remains of Roman period and groups of tile-covered graves of Late Antiquity.

Simiza: In 2010, part of a small burial mound (“Anoixa” site) has been investigated, which based on the pottery can be dated to the Early Mycenaean period.