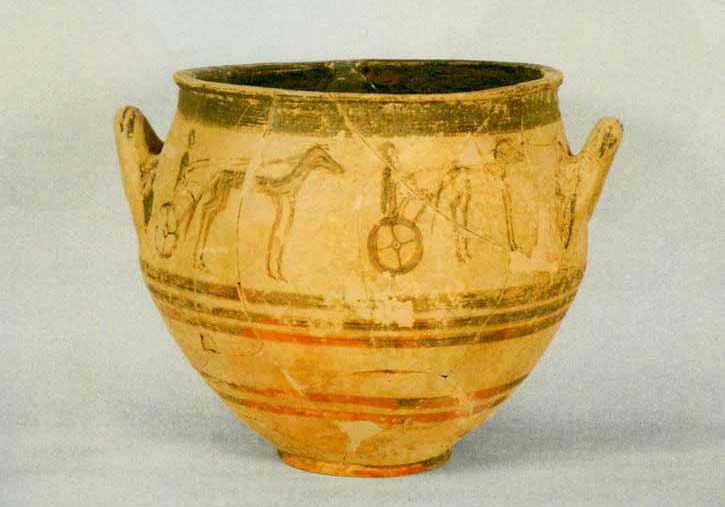 New Results from the Recent Excavations of Mycenaean Sites at Elis

Olimpia Vikatou, Director of the 36th Ephorate of Prehistoric and Classical Antiquities, will present the “New Results from the Recent Excavations of Mycenaean Sites at Elis”. The lecture is part of the Mycenaean Seminar, an annual series of seminars, which provide a much needed forum for archaeologists and students to meet, present and discuss ongoing or recent research projects, in the field of Mycenaean studies. This is the 2nd meeting of this year’s Mycenaean Seminar series.

Until recently, Elis, judging by the existing bibliography, was considered an isolated, thinly populated, and relatively undeveloped area, in the shadow of the large Mycenaean centres of the Peloponnese, an area with a belated adoption of new trends. This is now beginning to change due to investigations conducted by the 7th Ephorate of Prehistoric and Classical Antiquities during the last ten years, which have proved decisive, not only for Mycenaean studies in general, but also for the wider area of Olympia in particular.

The lack of settlement remains was partly remedied by the discovery of the first extensive settlement at the site of Triantaphyllia Koryphes. Near the settlement were also investigated three tholos tombs, the first to be discovered in Elis north of the Alpheios river.

The extensive organized cemeteries that are coming to light in the wider area of Olympia make a decisive contribution to the study of Elis and of Western Peloponnese as a whole. From the rich cemeteries of Agia Triada, Kladeos and Mageiras, which yielded important finds, have emerged significant data for the topography, the funerary architecture, the burial customs, social stratification, everyday life, as well as for the commercial and cultural relations of Elis with the Mediterranean basin.

New important evidence has appeared as regards the burial customs of Elis, such as the marking of the graves with large amphorae and kraters and/or with stones, as well as the use of funeral biers.

A very important chapter is now the local production of pictorial pottery, which flourished during the LH IIIC period. The local pictorial pottery depicts human figures, birds, animals, fish, hybrid birds and of course, it includes two of the best pieces, illustrating the prothesis and the ekphora of the dead on a krater and an amphora sherd, respectively, as well as the crater with the chariot-race, all of this creating new evidence for the pictorial style in Western Greece.

The warrior’s graves at the Mycenaean cemetery of Agia Triada, Kladeos and especially at Mageiras, in which five out of nine graves are warrior graves, but most importantly grave 5, belonging to a warrior-leader, with rich grave goods, recreate the socioeconomic, military and political organisation of Mycenaean Elis.

The excellent quality of the pottery and other finds emphasise/confirm the relations of Elis with the Mediterranean basin. Because of its geographical position, it enjoyed the privilege of direct contacts, not only with the Ionian islands, the Adriatic and the West, but also with the entire Mediterranean basin as a whole, especially Crete and Cyprus.

The careful construction of the graves in general, the monumental two-chambered tombs, the rich graves of warrior-leaders, the excellent pottery with the unique pictorial themes, the weapons, the boar’s-tusk helmets, the quantity of gold jewellery, the necklaces, the diadems, made of semi-precious stones and glass, the seal stones, and the toiletry items, the stone mould and the pens, form a picture of a flourishing society, confirming/emphasising the view that apart from Achaea, Elis too was the last bastion of the Mycenaean civilisation.

The 2nd meeting of the Mycenaean Seminar will be at 7.00 p.m. in the British School at Athens, Upper House (52 Souedias st.). The lecture will be held in Greek.