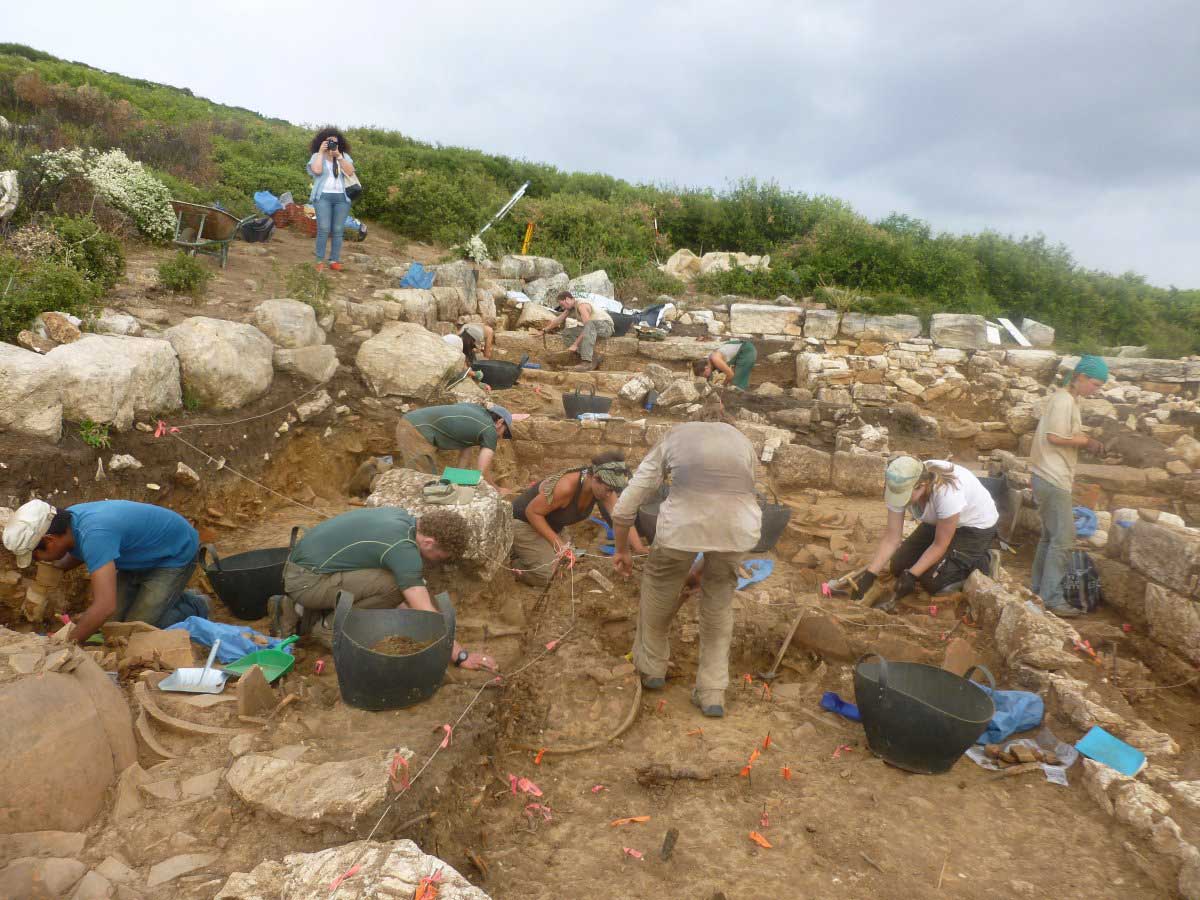 The Kastro Kallithea Archaeological Project is a collaboration between the Hellenic Ministry of Education and Religious Affairs, Culture and Sports and the Canadian Institute in Greece. The former is represented by Sophia Karapanou of the 15th Ephorate of Prehistoric and Classical Antiquities at Larissa, and the latter by Margriet Haagsma of the University of Alberta. In 2012, the project ran from May 28 to July 7, and continued the excavation of Building 10, a large Late Hellenistic mansion dating to the late 3rd-2nd Centuries BCE, measuring 20 by 15 meters. This large house has a number of unusual features; its construction, layout and decoration are clearly different from the more traditional architectural styles in Greek domestic architecture. The atrium (Unit E) for instance, displays a distinct Roman influence and the wall paintings and domestic items must have articulated the wealth of this household. Houses of the late Hellenistic period with Roman influences have been found in various other areas such Delos and Northwestern Greece, but thus far not in inland Thessaly and never one dating to a period this early. This makes Building 10 unique. Its study will make significant contributions to our knowledge of urban life in this important period of transition.

The first challenge of this season’s excavation was to remove all large building blocks that were lodged into the topsoil of the new units. Under the rubble, the team encountered dense layers of rooftiles, some of which bore stamps of various makers. In between and under the rooftiles, in units K and L, the team initially found two pithoi, apparently in situ. In the course of the successive two weeks, when the team reached the floor level, that number had increased to no less than ten! In addition, we found a large number of other smaller storage vessels in this area. The number of pithoi and the accompanying storage capacity is unprecedented for a house of this period. Five of these vessels are very large, measuring more than 1 meter in diameter. They were dug into the beaten clay floor to a depth of at least 1 m.

Units G and H were finished this year and it became clear that both rooms originally had plastered walls. Unit G even yielded ample evidence for elaborate wall decorations: plaster mouldings and imitation marble slabs were found which had fallen onto the floor. Given its location, size and its monumental threshold we hypothesize that Unit G may have originally been an andron, the role of which was modified during a second phase habitation later in the 2nd century BCE. A spectacular terracotta figurine was found here as well, consisting of a standing female with an unusual headdress. The other areas in Building 10 yielded a variety of finds including a large number of bronze items including two archaic fibulae as well as a large number of mould-made bowls testifying to the activities and opulent life style of the households inhabiting this building.