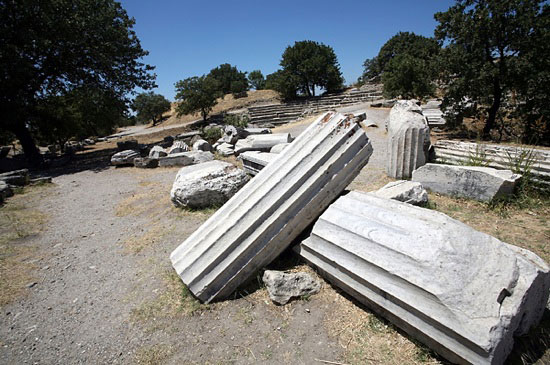 The ruins of ancient Troy will be examined by a cross-disciplinary team of scientists in an expedition led by UW-Madison classics professor William Aylward.

Troy, the palatial city of prehistory, sacked by the Greeks through trickery and a fabled wooden horse, will be excavated anew beginning in 2013 by a cross-disciplinary team of archaeologists and other scientists, it was announced yesterday (Monday, Oct. 15).

The new expedition will be led by University of Wisconsin-Madison classics Professor William Aylward, an archaeologist with long experience digging in the ruins of classical antiquity, including Troy itself. The new international project at Troy, to be conducted under the auspices of and in cooperation with Turkey’s Çanakkale Onsekiz Mart University, will begin a series of summer-time expeditions beginning in 2013.

“Troy is a touchstone of Western civilization,” says Aylward. “Although the site has been excavated in the past, there is much yet to be discovered. Our plan is to extend work to unexplored areas of the site and to systematically employ new technologies to extract even more information about the people who lived here thousands of years ago.”

Troy and the Trojan War were immortalized in Homer’s epic poem the Iliad centuries after the supposed events of the conflict. The site was occupied almost continuously for about 4,500 years, from the beginning of the Bronze Age to the 13th century A.D., when it was abandoned and consigned to myth. It was rediscovered in the 1870s by the wealthy German businessman and pioneering archaeologist Heinrich Schliemann whose work at Troy laid the foundations for modern archaeology.

“Our goal is to add a new layer of information to what we already know about Troy,” says Aylward, who is contributing an international team of archaeologists and scientists to conduct what promises to be the most comprehensive dig since Troy’s discovery over 140 years ago. “The archaeological record is rich. If we take a closer look with new scientific tools for study of ancient biological and cultural environments, there is much to be found for telling the story of this world heritage site.”

The site of Troy is in modern Turkey and is situated on the Dardanelles, a crossroads between East and West and a flashpoint for conflict in both ancient and modern times. The archaeological site is a complex layer cake of history and prehistory, with 10 cities superimposed one atop the other, some with clear evidence for violent destruction.

Following the demise of Troy at the end of the Bronze Age, the site was re-settled by Greeks, Romans and others, who all claimed Homer’s Troy and its cast of characters — Achilles, Helen, Patroclus, Priam and Ajax — as their own cultural heritage. The ancient city was visited by the Persian general Xerxes, Alexander the Great, and Roman emperors, including Augustus and Hadrian. Homer’s epic poems about a lost age of heroes and the legendary Trojan War have endured as sources of inspiration for art and literature ever since.

Although archaeologists have been digging at Troy for almost 140 years, with the exception of a 50-year hiatus between 1938 and 1988, less than one-fifth of the site has been scientifically excavated. With about 4,500 years of nearly uninterrupted settlement at a crossroads between Europe and Asia, Troy is fundamental for questions about the development of civilization in Europe and the Near East. “Troy deserves a world-class archaeological program,” says Aylward.

In its heyday, Troy’s citadel, with walls 12 feet thick and more than 30 feet high, was about 6 acres in size. A walled lower town covered an expanse of 50 acres, much of which is unexplored. Mysteries abound. Ancient Troy’s royal cemetery, for example, has yet to be discovered and archaeologists are eager to add to the single example of prehistoric writing known from Troy, a small bronze seal from the Bronze Age.

“Troy is a touchstone of Western civilization. Although the site has been excavated in the past, there is much yet to be discovered.”

“Major gaps in our knowledge involve the identity of the prehistoric Trojans, the location of their principal cemeteries and the nature of their writing system,” says Aylward. “The enduring question of the historicity of the Trojan War is also worthy of further exploration.”

In future work at Troy, Aylward plans an array of collaborations in order to deploy powerful new scientific techniques to reveal the hidden record of the ancient city and its inhabitants. New methods to examine chemical residues on pottery from ancient kitchens and banquet halls, for example, may reveal secrets of ancient Trojan culinary proclivities, and genomic analyses of human and animal remains may shed light on diseases and afflictions at a crossroads of civilization.

Much of the new work in the area of “molecular archaeology,” which includes DNA sequencing and protein analysis, will be conducted in collaboration with the UW-Madison Biotechnology Center, which has become an active partner in the new Troy project. This past summer, researchers from the center participated in reconnaissance for future studies.

The new Wisconsin expedition to Troy builds on years of existing work and international collaboration at the site. The new program to be inaugurated in 2013 will be conducted under the auspices of Çanakkale Onsekiz Mart University, which is situated near the site of Troy.