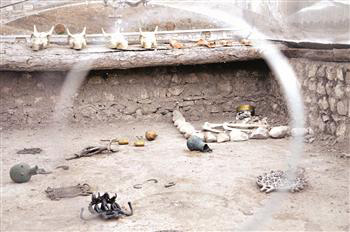 A Hittite dam was revealed during excavations at the ancient site of Alacahöyük in the northern Anatolian province of Çorum.

Alacahöyuk is a Neolithic and Hittite settlement, northeast to Boğazkale, where the ancient capital city of the Hittite empire Hattusa was located. Excavations at the site began in 1907 by Ottoman archaeologist Theodor Makridi Bey, then continued by German teams and brought to light royal tombs of the 3rd millennium BC and a Hittite town of the 2nd millennium BC, with the famous sphinx gate at its entrance. Excavations, resumed in 1935 and continued until 1970 by Turkish archaeologists revealing local occupation dating from the 4th millennium BC. Since 1994, archaeological surveys at the site are being directed by Professor Aykut Çınaroğlu.

The existence of a dam had been known since 1935, but at the time the dam hadn’t been unearthed. With the encouragement of former Çorum Gov. Atıl Üzelgen and the financial support of former Environment Minister Fevzi Aytekin, Çınaroğlu, began excavation work in the area, aiming to bring the dam to light.

“We excavated the area but could not unearth the dam completely. This dam was built 3,250 years ago but with the same technique used today. They used clay instead of cement. It is important for us because even the Hittites understood 3,250 years ago that it was not possible to live in Anatolia without constructing a dam,” he said.

According to Hürriyet Daily News, the dam is the oldest one ever found in Anatolia.

During the Hittite period, there was a big problem of drought, as Çınaroğlu explained. This is why not only this dam, but 11-13 dams were constructed in Central Anatolia during the same period. The dam Çınaroğlu excavate had been ordered by Pudu-Hepa, the wife of the King III Hattushili, the ‘Hürrem Sultan’ of the Hittite period. It was constructed for irrigation and to provide drinking water, and this fact makes it a unique example of that time.

Considering the fact that these dams were built by hand, it is also very big, as the professor stressed.