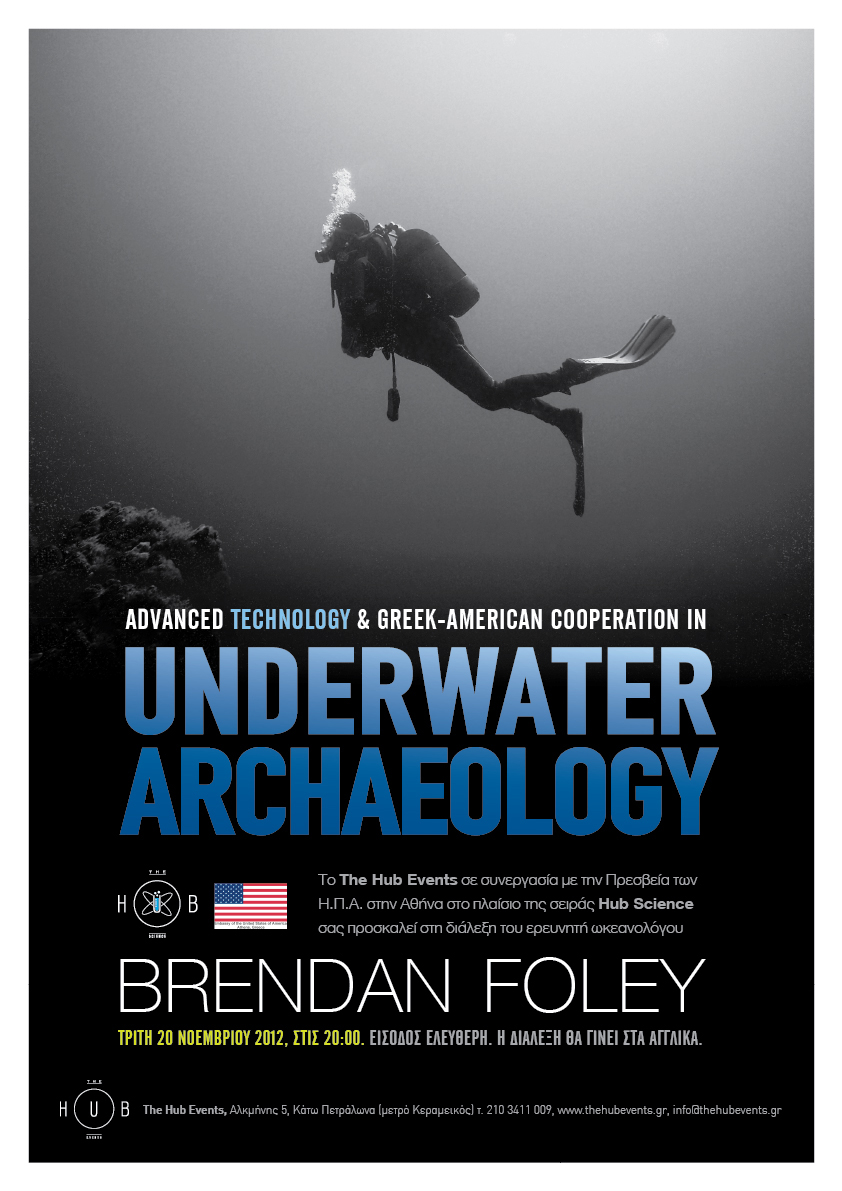 The Hub Events and Nikolaos Protonotarios organize for the second year the Hub Science lecture series, aiming at presenting the natural and social sciences to a broad audience in an appealing way and carry us away into their magical though sometimes misunderstood world.

On Tuesday, November 20, 2012, at 8:00 p.m. as part of the Hub Science series, The Hub Events in collaboration with the U.S. Embassy in Athens, researcher oceanologist Dr. Brendan Foley will hold a lecture entitled “Advanced Technology and Greek-American Cooperation in Underwater Archaeology.”

For nearly a century, Woods Hole Oceanographic Institution has been one of the best known and most trusted names in ocean science and exploration, and America’s largest oceanographic research center. WHOI contributes to or directly manages a range of community-wide scientific efforts that help advance ocean research, both nationally and internationally, and understanding of the ocean and its role in shaping and sustaining the planet.

One of WHOI’s mission is to further human understanding of the deep-sea floor by developing systems for remote, unmanned exploration. Woods Hole designs and adapts state-of-the-art automatic control methodologies to specially designed remotely operated underwater vehicles for survey, close-up observations and sample gathering in some of the most remote and extreme regions of the oceans.

Among other areas around the globe, WHOI has conducted numerous surveys and underwater projects in the Mediterranean (Greece, Egypt, Algeria, Turkey). Since 2004, WHOI has worked and cooperated with the Hellenic Ministry of Education and Religious Affairs, Culture and Sports in the study of ancient shipwrecks. The Greek and American team has brought advanced technologies to archaeology. The partners use submersibles, autonomous robots, technical diving methods, and DNA analysis to investigate underwater archaeological sites throughout the Aegean Sea.

Through images and video, this lecture shares the use of new technologies to advance the research in the Mediterranean and discusses the future of underwater research.

Dr. Brendan Foley studied History at the University of New Hampshire and Tufts University; Maritime Archaeology at the University of Southampton; and received his Ph.D. in the History and Archaeology of Technology from MIT, where he worked as a lecturer and visiting scholar. Since 2006, he has been working at the Woods Hole Oceanographic Institution as a research specialist (Deep Submergence Laboratory). His main research activities focus on underwater archaeology. For the past twenty years Dr. Foley has applied advanced technologies in innovative research programs and has conducted maritime archaeological surveys and excavations in intertidal zone (shallow and deep water) in various areas around the world.