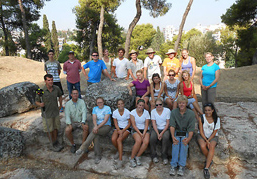 The first open lecture given on the Thebes Excavation at Ismenion hill drew an excited crowd. During the last two summers, Stephanie Larson, Associate Professor of Classics, and Kevin Daly, fellow Associate Professor of Classics, have led groups of students to Thebes,  which worked at the excavations conducted there. The project is the first-ever joint Greek-American archeological dig at the site.

As stated in the Bucknell University’s site: “Thebes is an unsung haven of significance in the field of antiquities. While it has long been suspected that Thebes’ civic and religious contributions have yet to be fully understood, the dig at the Ismenion hill, in cooperation with the 9th Ephorate of Prehistoric and Classical Antiquities and the 23rd Ephorate of Byzantine Antiquities, will go a long way to defining the historical and cultural contributions of this major ancient Greek city-state. The team has already made a number of finds that signify Thebes’ importance in the classical world. One of the first projects the Bucknell team tackled was generating a consistent, electronic topographical map of Thebes”.

The team used an iPad application to create the new map of the site, electromagnetic imaging, and measurements to sea-level. As significant parts of Ismenion hill have never been excavated, this project is extremely important. The finds of the Bucknell team help contextualize what is already known about the region and to better understand burial practices used as far as the second millennium BC.

Among the finds, is a red clay askos, which was unearthed in a foundation trench to the eastern side of the last of three temples that stood on the Ismenion hill. The artifact is painted with scenes depicting sphinxes. As sphinxes had an important mythological role, “it is exciting”, according to Larson, “to have a depiction of sphinxes found within the civic shrine of Thebes and from the same time period as Sophocles was writing in Athens.” This find indicated that Thebes was an important Classical city in the Boeotian region of the Mediterranean.

The team also investigated a “trash pit” (bothros) at the site, and managed to separate organic samples from the clay pots they found there, and also to date them. “We’re going to get a nice typology of cooking pots, which are tied to the fineware pots, which are tied to a very tight sequence of coins,” Daly said. “Cooking pots are, at times, a better marker of time.”