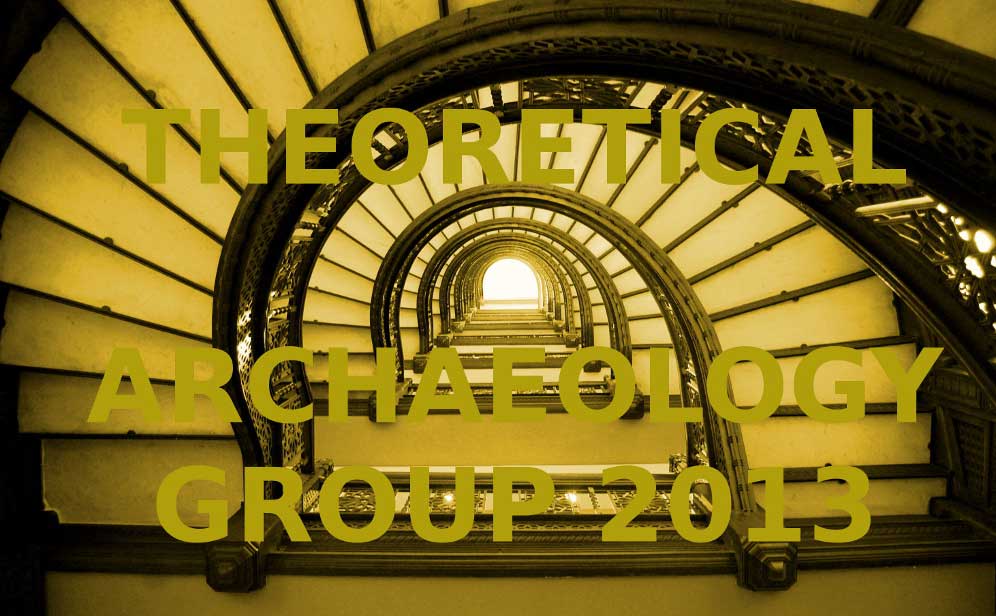 The Theoretical Archaeology Group began in the UK in 1979 as gathering of archaeologists interested in exploring the intersection of archaeology with frontiers in critical theory, philosophy, and anthropology. Since that time, an annual meeting has been held in the UK. A sibling branch was established in Scandinavia in 2000. In 2008, the TAG-USA group was formed and an inaugural conference held at Columbia University. The conference has grown each year and now provides a vibrant link between American and European archaeologists. TAG conferences have sparked some of the most inventive archaeological articles published in venues such as Archaeological Dialogues, Antiquity, and Social Archaeology. Each year, a different institution takes responsibility for organizing the conference and serving as primary host. Shannon Lee Dawdy of the Department of Anthropology, University of Chicago, serves on the national board and, with colleague Francois Richard, has committed to organizing the 2013 meeting in Chicago.

Inspired by the venue of Chicago, a forcefully planned city shaped by the vision of Daniel Burnham and his political allies that prides itself on the visual assets of its modernist architecture and public art collections, as well as its ability to forecast the economy through the futures market, the theme for 2013 is “Vision.” Vision can be taken to include:

-vision as dream: from its Latin root, visionem, things seen in dreams, the imagination, the supernatural

-vision as sense: the phenomenology of sight and the place of art, aesthetics, and contemporary architectural theory in archaeological contexts

-vision as power and domination: surveillance, panopticons, and legibility

-vision as time and intention: planning, futures, utopias, millennial movements, and the forecasts of the past

-vision as method: the rapidly changing visual methods of archaeology through computer technology and imaging and the ways these methods are transforming epistemology

The theme will form the basis of a conversation initiated by the plenary session but participants are urged to interpret it generously and sessions will not be limited by subject. In its broadest sense, Vision represents a birds-eye view of where archaeology is headed, the vista that TAG attempts to provide through its now world-wide conferences.

Session proposals can be submitted through the registration page up until January 1, 2013. Session proposals must include a title and abstract (max 400 words), and indicate whether a 1.5 hour or 3 hour time slot is required. Organizers are free to make use of the time slot however they wish (i.e., scheduling discussants, Q&As, or round-table discussion in addition to paper presentations), but should briefly describe the format of the session in their abstract. More creative and non-traditional uses of the time frame are also welcome, but requests for additional AV equipment should be made by March 15, 2013.

Accepted sessions will be posted on the program page after January 1 2013, along with the email addresses of the organizers. Potential participants should send individual paper abstracts (max 300 words) directly to the session organizers, by email. Session organizers are responsible for selecting papers, and for sending the complete session roster along with all paper abstracts and titles to the TAG-Chicago committee by March 15, 2013.