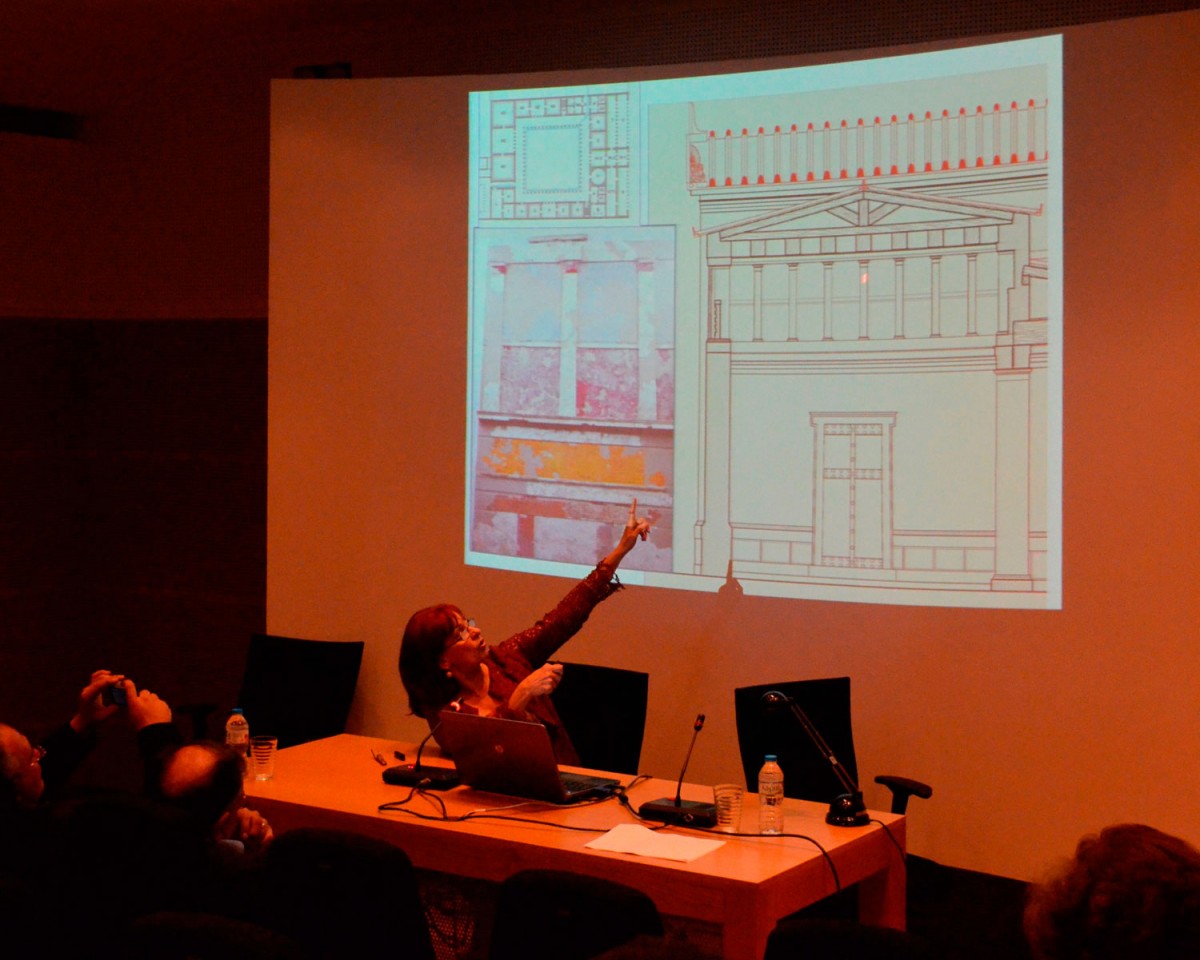 The Aigai palace: an architectural manifesto

The architect, a genius, has created an avant-garde building.

The mounting, conservation and restoration of the Aigai palace, having started in 2007 by the 17th Ephorate of Prehistoric and Classical Antiquities (EPCA), is now advancing in high speed.

Dr Angeliki Kottaridi, head of the 17th EPCA, has presented the data that have emerged at a meeting held on November 18, 2012 at the Congress Hall of the Aristotle’s School, in ancient Mieza.

As mentioned by Dr Kottaridi, scientific documentation has filled the research’s lacuna and has made possible the secure dating of the Aigai palace. It is now clear that the whole complex, that is the central but also the West auxiliary peristylion, was designed and built as a whole, its construction being completed sometime between 350 and 336 BC. The whole building, part of the grand program of reconstruction and urbanization materialized by Philip II, constitutes the architectural formulation of the enlightened despotism dogma.

Last years’ research has contributed to the full restoration of this huge palace that measures over 12.500 square meters. This is how the innovations in the architectural design and in the building’s completion became plain, such as the first fully formed two storey galleries and, above all, the peristylion itself, the palace’s “heart”.

The number of the architectural parts that have already been conserved and studied is such that it will be possible to restore both the propylon’s upper floor with the pseudo-windows in stone and the facade galleries at the big atrium of the central building in the polycentric museum of Aigai –a museum that is funded by the National Strategic Reference Framework (NSRF) and whose construction is given priority.

Recent research has also made clear the function of the Aigai palace. Far from being, as believed till now, the king’s residence, it was instead a public space that housed the very structures of the royal authority. That is, it is a building that expresses the credo of the Macedonian king and his ideology tinted by Platonic thought.

“By merging in an extremely creative and avant-garde way traditional elements and radical inventions, the architect of the Aigai palace, a genius, creates an avant-garde building, designed to become the architectural manifesto of the ideal state of the élite, a tangible formulation in space of the enlightened hegemony idea”, Ms Angeliki Kottaridi emphasized. Dr Kottaridi’s own research shows that the building’s design follows with an admirable precision the mathematical and philosophical prototype based on the “sacred analogy” of the golden section (number φ). To this prototype are embodied both the golden Pythagorean triangle and Plato’s idea on the construction of the “Soul of the World” as formulated in Timaeus, a concatenation of regular geometric shapes that imprint in space the seven grade sequence of the prime powers of numbers 2 and 3 (1, 2, 3, 4, 9, 8, 27). These irrefutable data prove that the meticulous and well planned design of an avant-garde building signified the royal power as the union between the transcendental and the secular.

The Aigai palace presentation was followed by a Round Table on the Macedonian architecture’s influence on the Hellenistic world. Participants have concluded that the Aigai palace has served as the model for Hellenistic palaces throughout Alexander’s the Great world, having as a matter of fact exceeded them.

Macedonian architecture’s contribution to posterity is evident on both secular and religious buildings, such as the early Islamic mosques that preserve the peristylion. During discussion, specialists on various places of the Hellenistic world have pointed at the tremendous impact made by the radical changes in architecture, and more generally in art, during the time of Philip II. Such changes have been the foundation of the heritage Alexander the Great and his successors have left the world. Participants agreed that the design principles of the Aigai palace were of great importance to the evolution of Hellenistic architecture. They have even suggested a research project, carried in common with the Congress organizing committee, on the interplay between the Macedonian and the Hellenistic-Graeco Roman architecture.

Conservation and restoration of the Aigai palace have been funded by the 3rd CSF (Community Support Framework). Actually, the project is being funded by NSRF (National Strategic Reference Framework).