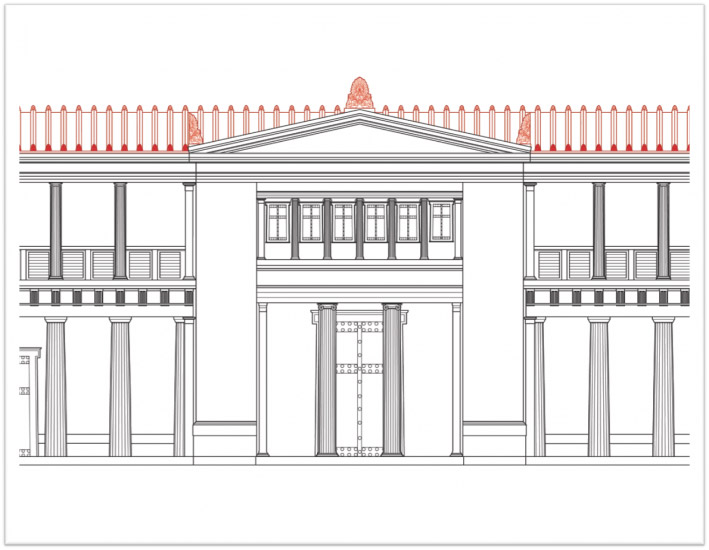 Restoring the Palace of Philip II at Aigai

The members of the Central Archaeological Council (KAS) in Greece unanimously agreed that the restoration of the ancient palace of Aigai, in the Greek prefecture of Macedonia, must go on in the best way possible, giving the “green light” to the materialization of an architectural study regarding mounting and restoring the palace’s main building.

The reason  for the KAS members to proceed to this historic decision was double. On the one side, the monument is tremendously important from an archaeological point of view, being created for King Philip II by a genious architect (presumably Pytheos). On the other side, its vast size “urges you to reach for heights in certain points. Any visitor will miss the complete visual aesthetics of the building without (experiencing) the third dimension whenever this can be given and after technical structural problems are solved”, stated Lina Mendoni, Secretary General of the Ministry of Culture and Sport, giving a certain direction to the study.

The study was impressively presented by Angeliki Kottaridi, Head of the 17th Ephorate of Prehistoric and Classical Antiquities and in charge, among others for all mounting, conservation and restoration works taking place in the necropolis and the palace of Aigai. Equally impressive were the images and information on the vast architectural complex, which, covering 12,500 sq. m., consists the largest and ( alongside the Parthenon) the most important building of Classical Greece.

As stated by Dr. Kottaridi in the last volume on Aigai published by the Latsis Foundation, the 4th c. BC. building, which was not designed as the King’s private dwelling but had a state character, continues to impress with the inventiveness, the harmony and the geometric purity of its form as well as with the “democratism”of its structure, as any sign of exaggeration, isolation or intention for safekeeping -characterizing palatial architecture outside Macedonia-  is absent.

In detail, two impressive colonnades (stoas), the first completely developed two-storied stoas known from Greek architecture,  were situated E, flanking the building’s entrance and containing seating benches for at least 120 individuals. The monumental entrance of the portico (propylon) , where 3,500 selected Macedonians were passing to enter to the peristyle court (peristylion) , the building’s heart, which was operating as an Agora. All the above spaces (and wherever else possible) are to be restored, by using ancient and modern material, in order to preserve tha building’s authenticity. A decistion is yet to be made on proceeding with securing the site’s N slope, as scholars are still working on the subject.