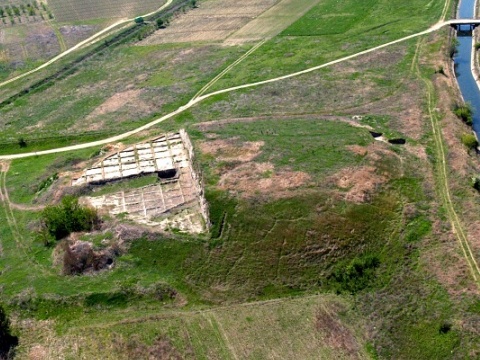 A Tell contains remains of an urbanized settlement dated to the early fifth millenium BCE.

Additional evidence of what may have been Europe’s first civilization has come to light at a site located near the town of Pazardzhik in southern Bulgaria. Known as Yunatsite, it is a Tell (mound containing archaeological remains) containing remains of an urbanized settlement dated at its earliest to the early fifth millenium BCE.

Directed by Yavor Boyadzhiev of the National Institute of Archaeology and Museums, Bulgarian Academy of Sciences, excavators have unearthed artifacts such as weapons, spondylus jewels, decorated fine ware pottery, shards marked by characters/pictograms, and evidence of structures dated to 4900 BCE, including fortifications and a recently discovered wooden platform that was likely the floor of a building that had been destroyed by fire.

The Copper age settlement was destroyed by invaders around 4200-4100 cal. BCE. Research has shown that beginning in the fifth millennium BCE, human populations in the central and eastern Balkans began developing metal-processing technologies, notably that of Copper, into a relatively large-scale industry for the first time in world history.

Moreover, writes Boyadzhiev: “These Balkan Copper age cultures had all the characteristics of the first civilizations, including: the very first urban settlements in Europe (Tell Yunatsite, Durankulak and Provadia in Bulgaria), dense networks of settlements, ‘industrial’ proportions of production of goods, especially metal products and salt, developed trade, distinguished social and professional stratification, pictograms and characters interpreted by some scholars as the world’s oldest script (Gradeshnitsa tablet for instance dates back to the sixth or early fifth millennium BCE) as well as precious artifacts made of gold, pottery, bone and stone (the world’s oldest gold treasure was found in the Varna Copper age necropolis)”.