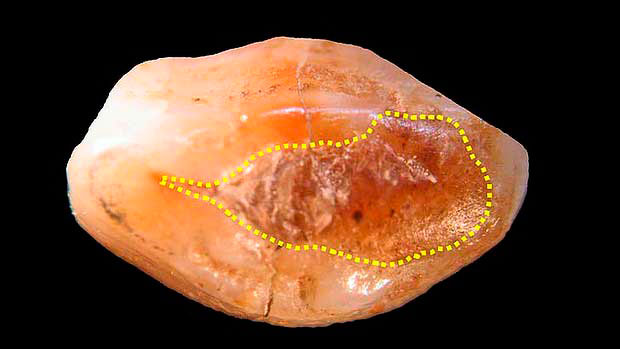 What excited archaeologists through 2012

At the BBC site

Louise Iles at the University of Cambridge prepared for the BBC site a month-by-month of what excited archaeologists through 2012.

2012 started off with some archaeological reminders of excesses. Following the news that Peruvians were snacking on popcorn as early as 4700 BC was evidence for early Maya tobacco use, with nicotine residues found in ceramic vessels from Mexico dating to between AD600 and AD900. Next came the news that the notoriously beer-loving Vikings who settled in Greenland around 1,000 years ago were growing barley there and thus were presumably able to brew their own.

February was accompanied by a chilly archaeology story about the whole-genome sequencing of “Oetzi the Iceman” – the mummified corpse of a man who was killed over 5,000 years ago in the Italian Alps. Analysis of his DNA provided a glimpse into ancient migration patterns in Europe. Previous analysis of his mitochondrial DNA had placed his maternal lineage a group from north-central Europe, while the new research found that his paternal ancestry belonged to a group found predominantly in Corsica and Sardinia.

March brought the discovery of an unusual and elaborate burial from the 7th century AD that highlighted the dynamic changes in society that characterised late Anglo-Saxon England. Unearthed in a village just outside Cambridge was the grave of a teenage girl, buried on an ornamental bed and wearing a beautiful gold and garnet cross. The burial merged pagan grave goods with Christian symbolism – a tangible manifestation of the transition from paganism to Christianity at a pivotal moment in the development of modern Britain.

It was in April’s wet weather that archaeologists, engineers and boatbuilders joined forces to discover how people built boats in the Bronze Age. Work began on a full-sized replica of a Bronze Age stitched boat at the National Maritime Museum Cornwall. Its design was based on a vessel discovered at North Ferriby on the Humber foreshore. Such boats were apparently used to trade metals such as tin, copper and gold with the European mainland.

May brought news of the oldest Maya astronomical calendar discovered so far, from the 9th Century. The calendar was depicted in murals painted on the inner walls of an abandoned building at Xultún, possibly the workroom of a scribe. Hieroglyphics written on some of the walls gave calendrical and astronomical tables for lunar and planetary cycles up to 7000 years into the future, debunking the theory that the Maya believed the world would end in 2012.

June saw the publication of a book (“The Statues that walked: Unraveling the Mystery of Easter Island”) challenging the theory that Easter Islanders destroyed their forested environment and wasted natural resources in the course of transporting almost 1,000 of the famous Moai statues into position. Instead, the authors emphasise the success of the islanders’ survival in such a marginal ecological environment. The widespread deforestation, they argue, was not due to human overexploitation of wood, but due to the arrival of rats along with the earliest settlers. These rats, with no natural predators, soon overran the island, eating the seeds of the trees and interrupting the natural cycle of forest regrowth.

Lingerie from the Middle Ages was among almost 3,000 beautifully preserved fabric items that were found during reconstruction works at Lengberg Castle in Austria. Among the extremely rare fabric pieces were a 15th-Century bra and knickers similar to those worn today, providing a glimpse into the very private matter of underwear in medieval Europe.

Two years after the disruption caused by Icelandic volcano Eyjafjallajökull came news of a somewhat more powerful and deadly volcano that erupted around 750 years ago. Ejecting eight times the volume of debris than the 1883 eruption of Krakatoa, this was the largest known eruption of the last millennium. The location of the volcano itself is still a matter of debate, but the effect it had around the globe remains visible in ice cores, lake sediments, and now mass graves excavated in London. Historical documents record the devastation reaped by the eruption in AD1258 as the plume of aerosols ejected from the volcano shielded the earth from sunlight and warmth. Crops failed and thousands starved; as epidemiologist William Farr put it in 1846, “in London alone 15,000 of the poor perished”.

One of the earliest examples of prehistoric dentistry came to light this month with the chance discovery of a beeswax filling in a cracked Neolithic tooth. The tooth belonged to a 24- to 30-year-old man who lived approximately 6,500 years ago in what is now Slovenia. High-resolution 3D imaging of the tooth revealed an area of exposed dentine as well as a vertical crack extending down to the pulp chamber. The beeswax seal may well have been an attempt to soothe his inevitable toothache.

New research by University College London and the Museum of Emperor Qin Shi Huang’s Mausoleum shed light on the sophisticated production model used to create the 7,000 warriors, chariots and horses of the Terracotta Army just over 2,000 years ago – following the exciting find in June of 100 more warriors. Co-ordinating a workforce of over 700,000 men to create finely crafted items to a high level of standardisation was a massive organisational feat that demanded the most innovative of production systems. Analysis of the bronze arrowheads carried by the warriors led researchers to suggest that the Army was built using a production process now referred to as “Toyotism”, named after the Japanese car firm. Unlike an assembly-line model, where specialised production units make individual components, this process utilises cellular workshops with highly skilled and versatile craftspeople that make complete end products: a flexible production system that maximises labour and minimises waste.

A burst of new evidence came to overturn the view that people in Mesolithic Britain were constantly on the move, living in temporary shelters that left little trace in the landscape. Mesolithic structures were excavated at Echline in Scotland and Lunt Meadows in Merseyside, dating to 8300BC and 5800BC, respectively. The Scottish “house” was a timber and turf structure, occupied seasonally during the winter months. In Merseyside, three structures were found, leading archaeologists to suggest that several families lived in the area for at least part of the year. New research at Star Carr, one of Britain’s most famous Mesolithic sites, corroborates these findings. Around 11,000 years ago, Star Carr extended over 2 hectares, with a 30m-long wooden lakeside platform and at least one post-built house – not the signature of a small hunter-gatherer camp.

December saw the discovery of a very rare cremation burial in an equally rare Iron-Age helmet. The bronze helmet, dating to the 1st Century BC, once contained a bag of cremated bone held together with a brooch – the first example of a bag burial in a helmet. Continuing analysis of the helmet, brooch and bone will hopefully shed light on how this helmet – originally from outside Britain – made its way to a field near Canterbury at a time of war and Roman invasion.