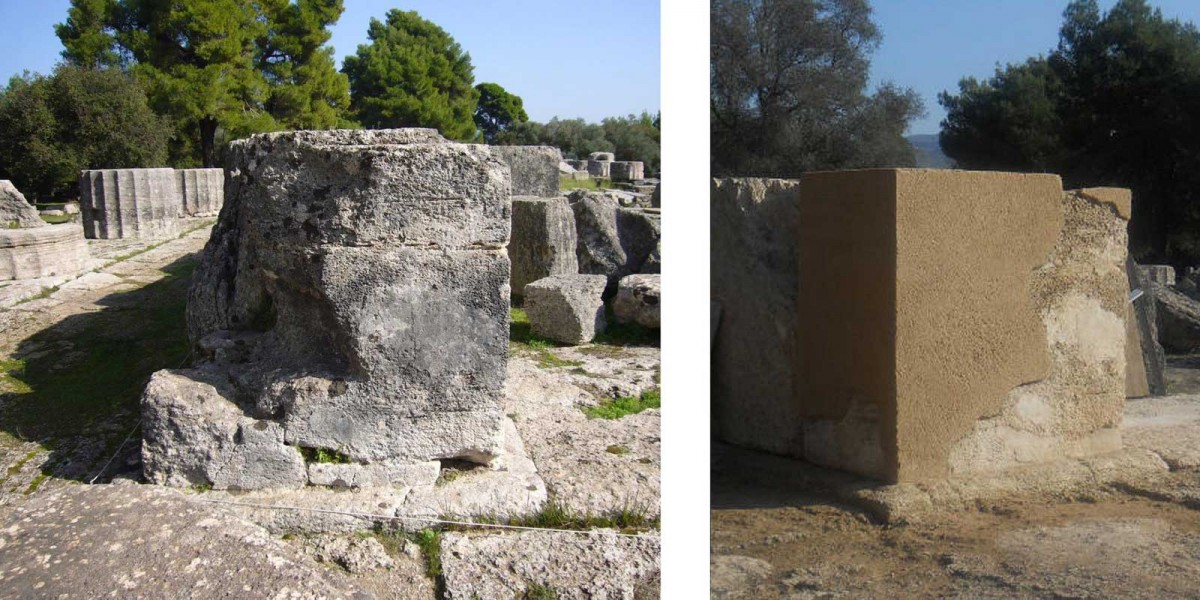 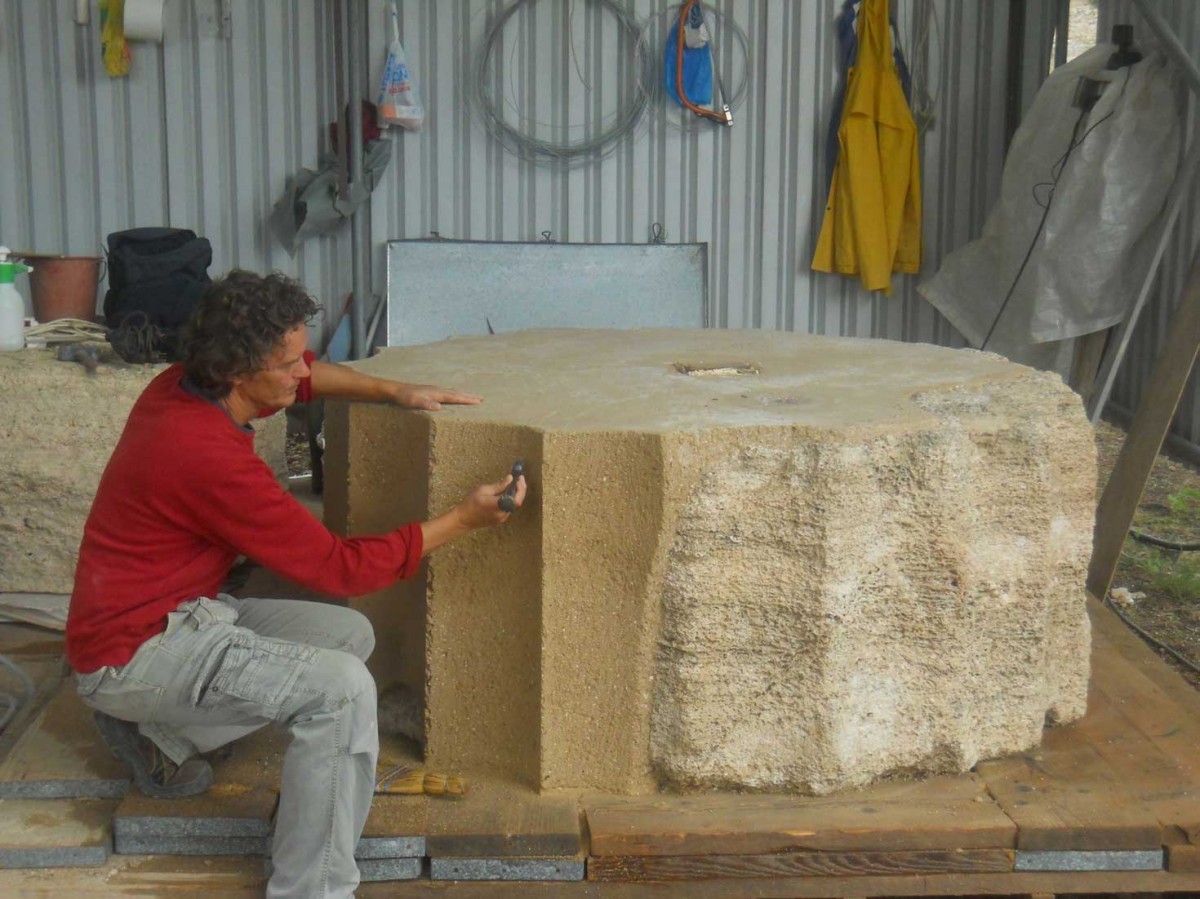 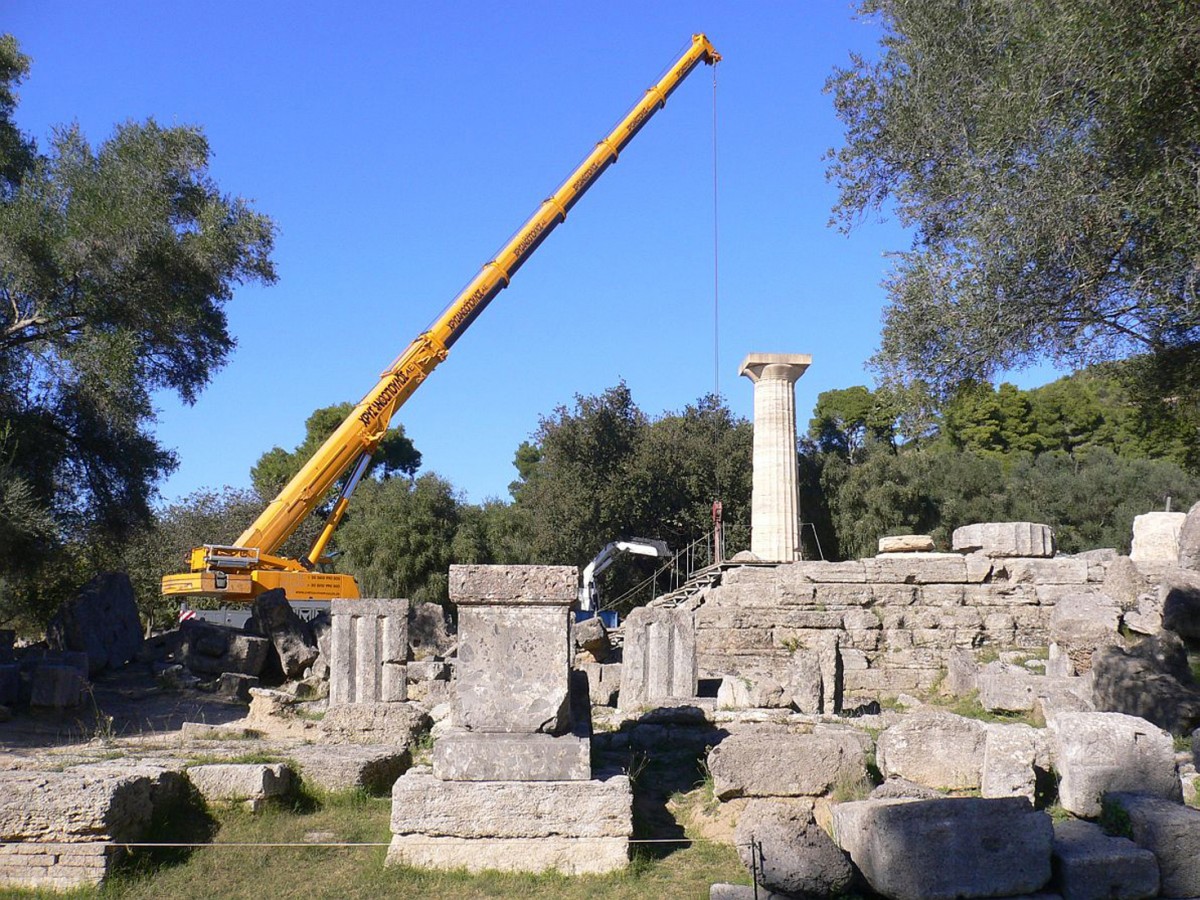 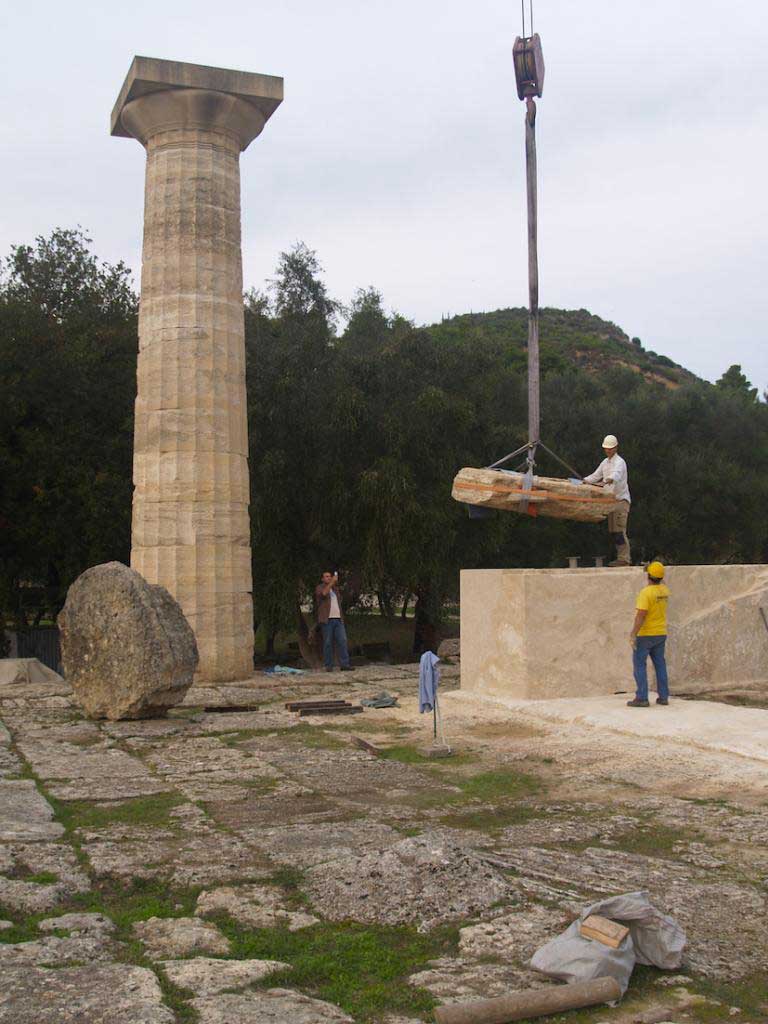 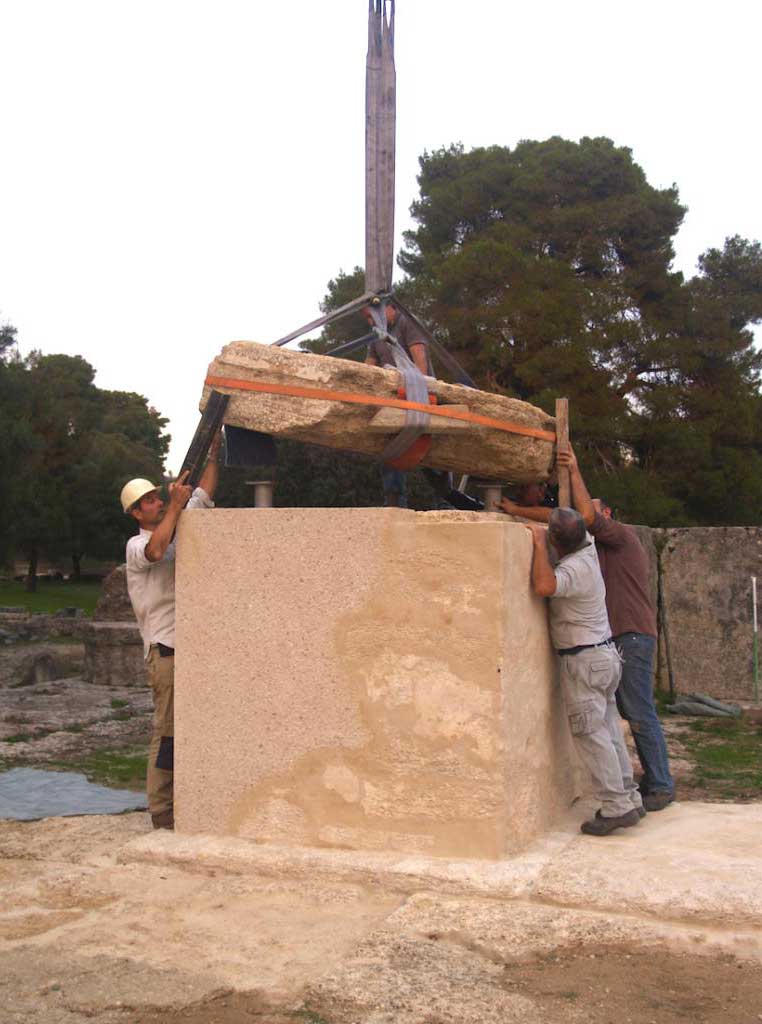 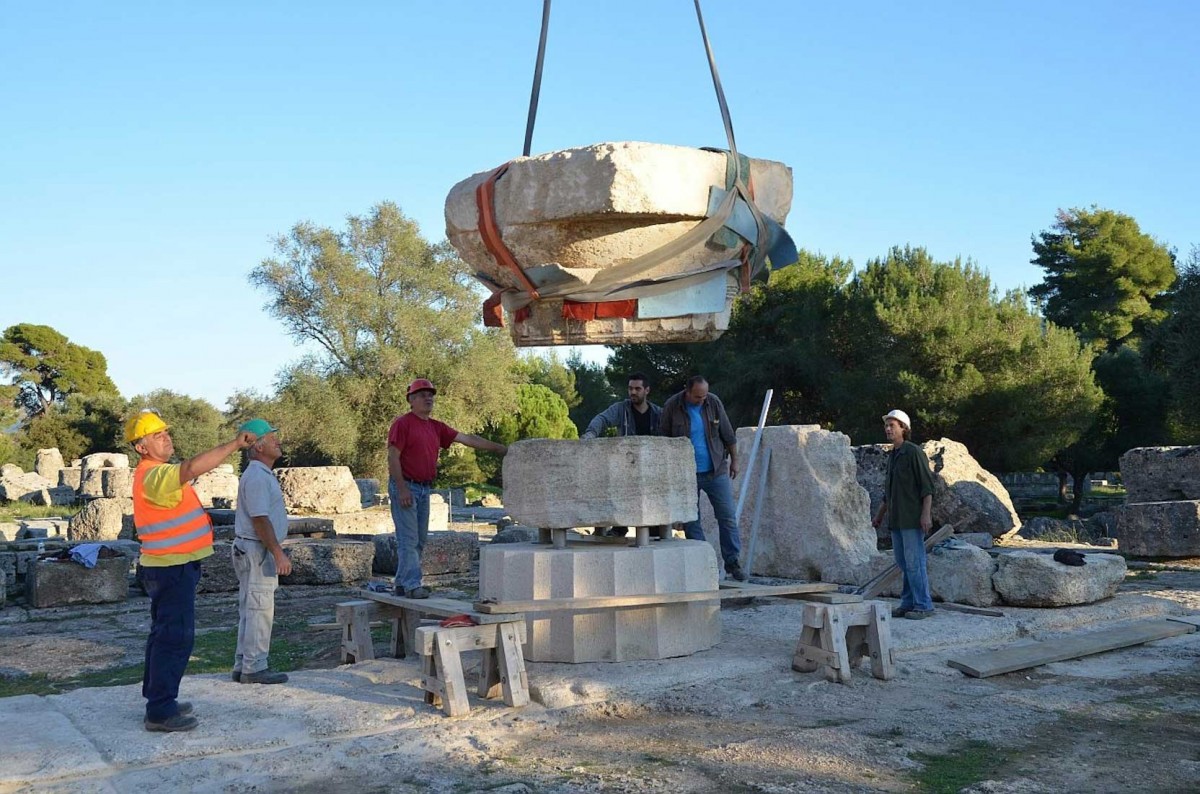 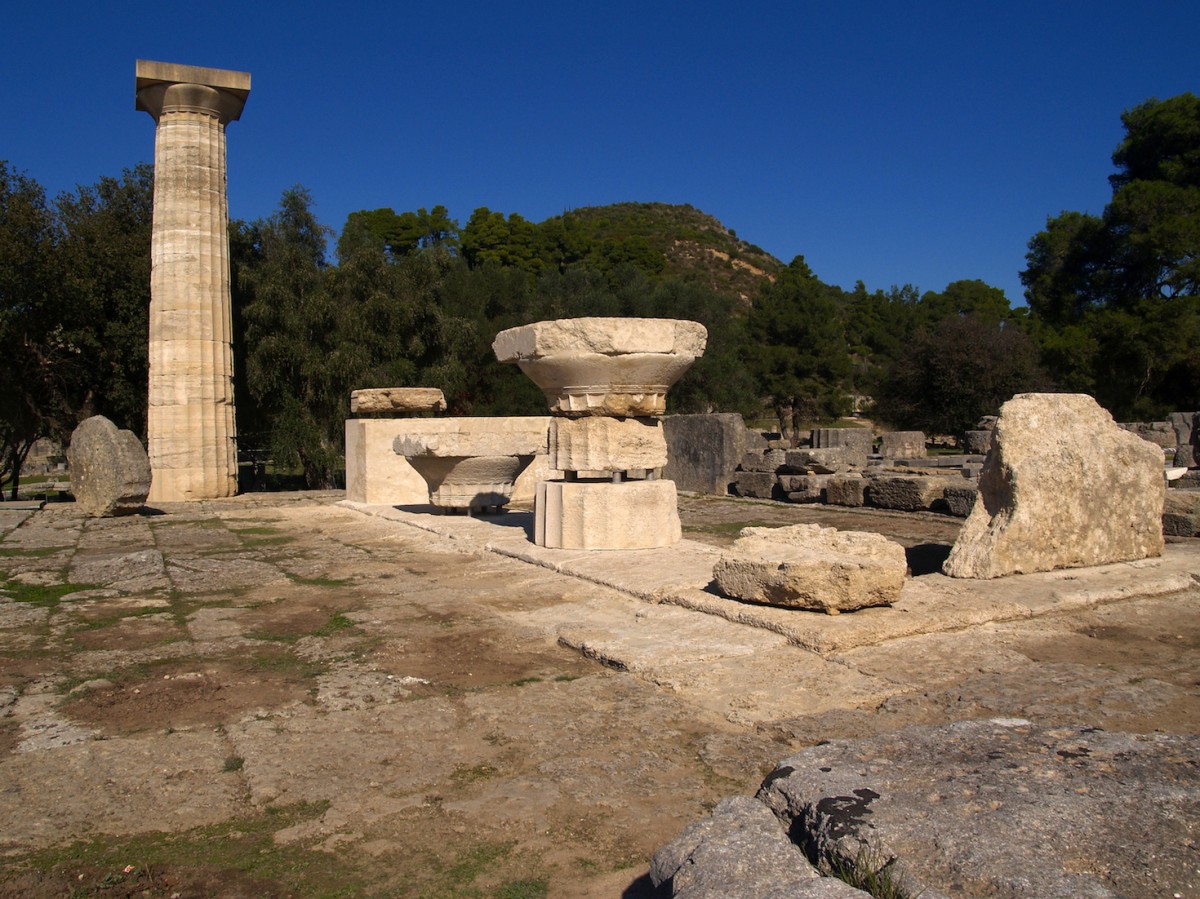 The Temple of Zeus at Olympia is considered as a pinnacle of Doric architecture and it once housed the Statue of Zeus, one of the seven wonders of the world. Up to now, only experts could make out the construction and the dimensions of the ruined temple. This is why, in recent years the German Archaeological Institute, on the basis of a 1992 master plan, has carried out numerous conservation and reconstruction works using the original architectural members which are preserved. Visitors of the site had the chance to get an idea of the third dimension of the building already in 2004, when a column was placed back to its original position. The second phase of the restoration has been successfully completed at the end of November 2012. The objective of this phase was to present the area of the western opisthodomos to the visitors in a most comprehensive manner.

For the partial reconstruction of the opisthodomos, 38 architectural members had to be removed, which had been lying there since the 19th century excavations. Namely, these were fragments of the drums of columns and unidentified fragments which possibly belonged to stones used for the consolidation of the frieze and put parallel to the southwestern street in front of the ancient ruins, while 12 wall ashlars were placed at the upper layer of the toichobate of the western wall of the Cella.

Only after this arrangement and the completion of the stone row of the wall was it possible to obtain a spatial aspect of the opisthodomos.

The jamps (orthostates) of the western anta, which are very well preserved (big stone blocks on the lower layer of the walling) were cleared by the lithics expert and conservator F. Beuthan. The missing northern edge was restored by a titanium reinforcement and the use of the “in Bosse” cast artificial mixture which was finally adjusted to the ancient surface (fig. 1).

The stylobate of the opisthodomos was cleared of weeds, and a thinner artificial stone mixture was used to fill small cracks and some deeper holes, in order to prevent further moisture penetration and damages from now on. A bigger part of the southern lower drum of a column of the opishtodomos was found in situ, but broken in three pieces. These fragments were reassembled with titanium bars and a missing part was filled with artificial stone of titanium reinforcement. Finally, the column flutes were elaborated by hand following the ancient method (fig. 2).

Furhermore, the two column drums of the opisthodomos which were lying west in front of the temple were cleaned and restored (without however being filled). In November 2012 the five restored architectural members were placed with the help of a five-axis crane. The crane required very accurate handling in order to cover the distance of 35 metres length and 7 meters height for the transport (fig. 3).

The lower part of the northern capital of the anta, weighing approximately 2 tons, was placed onto the restored western anta, although in antiquity it was placed 8 meters higher (fig. 4a-b). According to the guideline of the Directorate for the Restoration of Ancient Monuments, a gap should be left between the architectural members which can not be placed in their original position and their neighbouring members. Technically, this gap was created by the addition of stainless steel spacers of 15 cm height, appropriately manufactured to release the relatively soft shell limestone from the pressure.

The southern lower column drum that has been restored as an architectural member was placed in its original position. Using spacers, the upper drum was placed upon it. The placement of the southern capital of the opisthodomos followed. This weighed about 7 tons, and is the best preserved capital of the temple (fig. 5).

Due to the lack of the original architectural members of the joining column, the northern capital of the opisthodomos was placed onto the stylobate with the use of spacers. In this way the opisthodomos is presented as a space and the two well preserved and impressive capitals can be viewed from close quarters (fig. 6).

The project of the interventions mentioned above was initiated after being approved by the Central Archaeological Council in May 2011, and was funded by the A.G. Leventis Foundation.