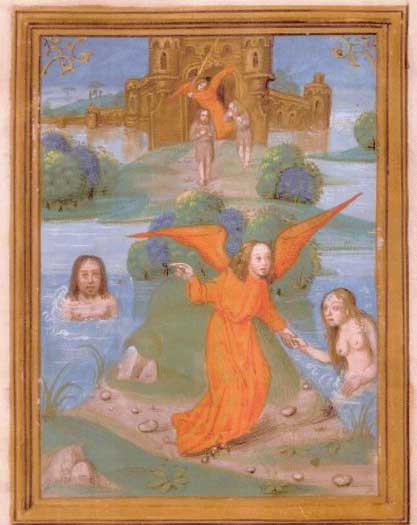 The Life of Adam and Eve and Adamic Traditions

International Colloquium on Jewish and Christian Apocryphal Literatures. The Life of Adam and Eve and Adamic Traditions

This fourth international Colloquium on apocryphal literature is devoted to Adam and Eve in apocryphal traditions. The new edition of the Vita latina Adae et Evae just published in the Corpus Christianorum Series Apocryphorum led L’Association pour l’étude de la littérature apocryphe chrétienne (AELAC) to organise this meeting. It should be an opportunity to honour the memory of Jean-Pierre Pettorelli, who devoted much time and energy in the last years of his life to the completion of this outstanding edition.

In the same spirit as the 2006 Colloquium on the Pseudo-Clementine Romance, this Colloquium will focus on the different forms of the Life of Adam and Eve, and at the same time be open as regards topics and methodology. On the one hand it welcomes original research on Adamic texts and traditions from Antiquity to modern times. On the other hand it aims at promoting a dialogue between scholars using different scientific approaches.

The members of the Organising Committee aim to encourage the participation of representatives of various disciplines in order to cast new light on the Life of Adam and Eve, in a fruitful dialogue with researchers particularly involved in the study of apocryphal literature. They hope this meeting will highlight the fact that research on Jewish apocrypha and research on Christian apocrypha are closely interrelated.

To further an interdisciplinary approach built on a common text, the work of the Conference will be divided into two main fields:

At the origin of the project, the Life of Adam and Eve will be questioned from various perspectives: what are the different recensions and how do they relate? Is the work originally Jewish or Christian? How was it transmitted, interpreted and reused? The Life of Adam and Eve belongs to a larger corpus of texts and traditions related to the protoplasts, in different languages and cultural areas. Where, when and how did these other texts and traditions originate, survive and change? What have been their functions?

The Life of Adam and Eve conveys a wide range of themes, such as paradise, Satan, reflections on the origin of evil, Adam’s ultimate fate, mysteries revealed to Adam, human birth, food, relationship of man with animals, physical suffering, death, etc.

The Colloquium is hoped to foster the understanding of the mental, cultural and religious representations found in the Adamic texts and traditions by exploiting a diversified range of knowledge (anthropology, philosophy, history of mentalities, history of social practices).

Beginning and end of the colloquium

The Colloquium will begin on Tuesday January 7th in the end of the afternoon and finish on Friday, January 10th 2014 after lunch.

Location of the colloquium

The Colloquium will be held at the Universities of Lausanne and Geneva.

The paper lecturers are asked to pronounce should take a maximum of 15 minutes, followed by a discussion of 5 minutes. Interested participants should send the subject and the title of their contribution as soon as possible, but in any case before March 15th, 2013. The organising committee will decide on accepting their suggestion in accordance with the themes finally agreed upon.

The registration fee (including admission to the Colloquium and all meals) will be approximately 180 €.