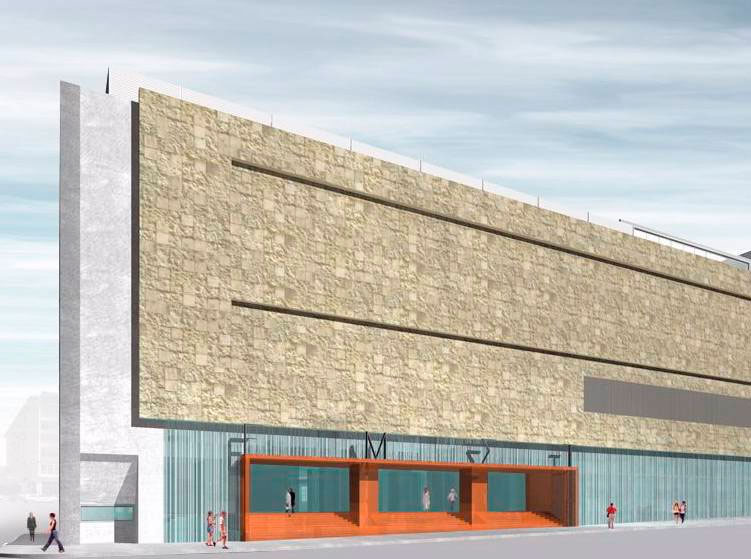 Building will be completed on October 2013

Reconstruction work of the former Fix brewery, in order to accommodate all the activities and collections of the New National Museum of Contemporary Art, are within time limit, as stated by the Deputy Minister of Education, Religious Affairs, Culture and Sports, Kostas Tzavaras after visiting the building earlier this week.

The new museum will be inaugurated on March 2014, thus its opening will coincide with the Greek EU Presidency of 2014.

Spokesman of the Museum’s reconstruction team Vangelis Stylianides explained to the Deputy Minister the aesthetic choices made, in order that the exterior of the building reflects the natural and aesthetic elements of the Ilissos river bed.

The Deputy Minister referred to the removal of the shelter at the entrance of the building, as it violates the aesthetic harmony of the façade. The Minister said he would look into the matter in the next few days, so that necessary funding would be ensured.

The study of the reconstruction will be altered according to bioclimatic standards.

The National Museum of Contemporary Art began its operation in 2000. Since then a remarkable nucleus of works of art by Greek and international artists has been developed. As mentioned by the Director of the National Museum of Contemporary Art, Anna Kafetsi, “we compose collections of selective rather than encyclopaedic character, which promote advanced tendencies and critical explorations of the artistic present but also its historical depths which reach as far as the second half of the 20th century”.

History of the Fix building

In 1863, Ioannis Fix constructs the first beer factory in Greece in the district of Kolonaki. In 1893, after his death, his son Karolos Fix, in an effort to expand his business, constructs a new and large, by the standards of the time, factory in the same area where the present building is standing, at the west bank of Ilissos and the south, not far from the Olympieion columns. At the time, the area was undeveloped. The vicinity at the south of Acropolis, which includes the specific area, started to develop after 1900 – 1910.

The success of Karolos Fix’s business during the first decades of the 20th century resulted in the continuous expansion of the factory until 1920, always in the same location.

By the mid-1950s the urban web of the town had gradually expanded, now covering the area surrounding the plant. However, the area continued to maintain a low density of construction with one- and two-storey houses, before the mass practice of land counter – prestation in exchange for appartments, a system which would utterly change the character of the area in the years to come.