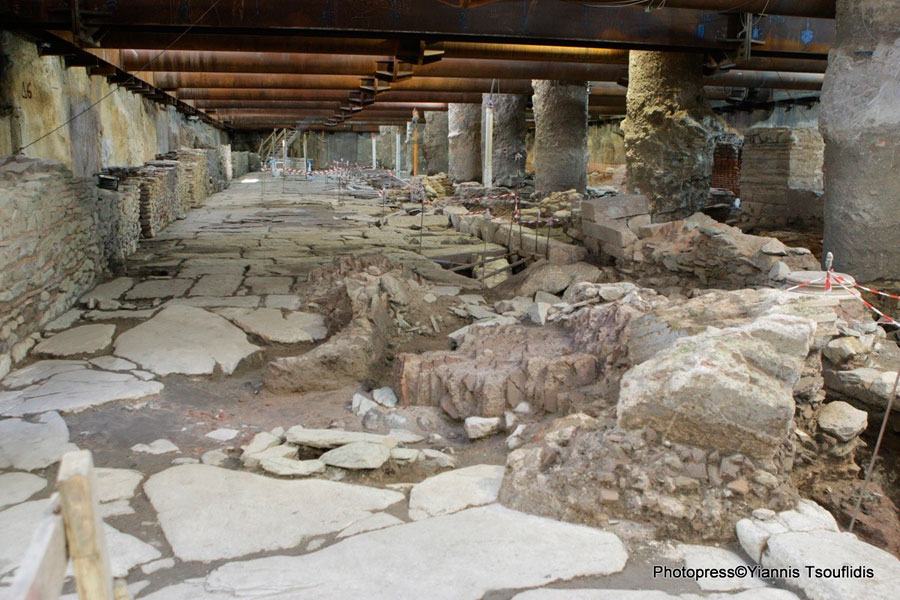 Despoina Koutsoumpa, Director of the Association of Greek Archaeologists

What is it that makes the Byzantine antiquities at “Venizelos” station of the Thessaloniki metro, so unique, that they have: a) set off a “war” between archaeologists, on one side, and the construction company and the State, on the other, b) called for an extraordinary meeting of the municipal council of the city, and c) collected many signatures? Is there a solution to the problem of their in situ maintenance?

The issue arose quite recently, after the unanimous recommendation of the Central Archaeological Council –which then became a ministerial decision- for the moving of the very significant Byzantine antiquities from the “Venizelos” station to the Pavlos Melas camp in western Thessaloniki. As a main argument for this decision is that due to technical and financial reasons (according to Attiko Metro) the co-existence of the archaeological finds and the station is impossible.

“The solution of the co-existence is feasible and necessary” archaeologists (and not only them) say, arguing that the significance of the finds is unbreakably connected to the place they where found”.

The reasons why were explained by Director of SEA, Despoina Koutsoumba, to AMNA:

“At the Venizelos station, a unique assemblage has been found, the very heart of cosmopolitan Thessaloniki, which was the second most important city of the Byzantine Empire: the stone paved main road or avenue of the Byzantine period, which is very well preserved in a length of 75 meters, underneath modern Egnatia street, and its junction to the marble paved cardo, which is located in the axis of today’s Venizelou street. In other words, what we have here is a historical crossroads which has survived for no less than 16 centuries, since the time it was planned during Galerius’ reign up until this day. Furthermore, public buildings have been found, which lay at the south of the road, with many building phases from the 6th to the 9th centuries AD. These buildings housed mercantile activities, as Thessaloniki was a very important center of commerce in the Byzantine Empire”.

“The fact that this commercial use of the area is preserved today not only in Bezesteni, the Byzantine era market, located at the same spot, but also in the modern market of the city, is touching. We also have the successive road alignment to the same direction, that today’s metro line follows” explains Mrs. Koutsoumpa, underlining the unquestionable archaeological and historical significance of the antiquities, in particular because not many similar examples are preserved neither in Thessaloniki nor in Istanbul.

“In the case of the Venizelos station antiquities we have something more than that: we have an archaeological ensemble exquisitely well preserved which “interacts” with its historical and modern environment. We have the unique chance to walk on the road of the Justinian Era, only 5 meters underneath the roadway of today’s Egnatia street, while 22 meters deeper the modern project, the city’s subway can extend. A road underneath a road, the ancient public work within the modern public work – this is something special. And it can give Thessaloniki a unique station in Europe, a station which itself will be a site worth visiting” she adds.

Similar examples of the co-existence of antiquities and metro stations can be found elsewhere, besides Athens, e.g. in France and in Turkey, where the Istanbul metro is under construction. Perhaps the most impressive example of all, though, is the central metro station of Sofia (Bulgaria), which was inaugurated in August 2012.

“During the excavations conducted for the building of the station in Sofia, the Roman city Sardica was found. What comes as a surprise is the way this was confronted – particularly in comparison to what has happened in Thessaloniki. Not only did they change the plans of the station, so that the antiquities would be incorporated in situ, in the interior and the exterior areas of the station, and at all levels, but they have also elevated the modern road so that the archaeological site can ‘breath’. It is a journey to the past and the future at the same time. The city has embraced it, and they very proudly present it in a video which has circulated all over the world. In fact, while the station has opened to the public, the excavations and the enhancement of the finds are still continuing. All this, despite the fact that Bulgaria has been also hit by the financial crisis, probably years before our country” the Director of SEA points out.

Before the extraordinary meeting of the municipal council of Thessaloniki, on Monday, March 4th, the two sides had never exchanged their opinions on the subject. “Unfortunately, both the Attiko Metro and the General Secretary of Public Works insist on the monologue. We cannot have a constructive dialogue when they try to persuade us that there is no technical solution. And I wonder why they insist on this position, that it is imporssible to find a technical solution, embarrassing themselves and the country’s science and technology community. While they claim that they are building the most technologically advanced metro, using the most important know-how, at the same time they are trying to convince us that they can’t even support the diaphragm walls of the station, even if the smallest change were to be made”.

At the meeting of the municipal council (an initiative of Giannis Boutaris, mayor of Thessaloniki, who is in favor of the in situ maintenance of the antiquities), Despoina Koutsoumpa presented her proposal, compiled by her and the civil engineer and former director of the Acropolis Restoration Service, Costas Zampas, a specialist in matters of restoration of monuments (he has worked at the restoration of the Parthenon and the Erechtheion). Mrs. Koutsoumpa’s proposal included the elevation of the antiquities with special support means, the continuation of excavations and the metro works, and the placement of a “plate”, so that two levels can be created: a level for the antiquities and a level for the ticket counters.

“At first I thought that 80% of the antiquities can be preserved in situ, but after the meeting and the presentation of all technical details by Attiko Metro, I am confident that 95% can remain in situ” Mrs. Koutsoumpa said to AMNA, stressing that what is missing from the plans of the construction company is the special know-how about monuments.