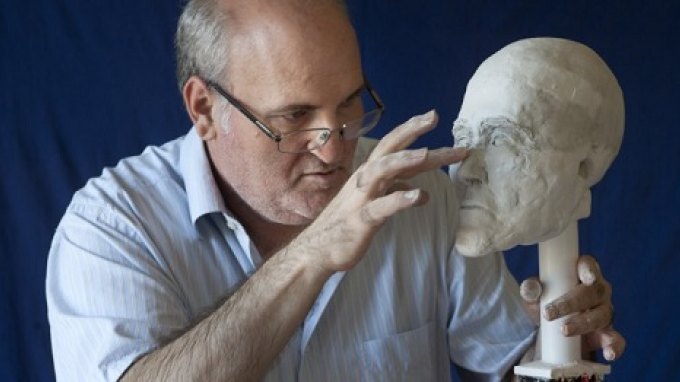 Face to face with a Saint

Researchers and artists produced a facial reconstruction of Saint Eutychius

An interdisciplinary research group of the University of Crete, the Technological Institute of Crete and the University Hospital of Heraklion conducted a survey in order to create a facial reconstruction of Saint Eutychius, based on the saint’s skull. The saint’s facial reconstruction will be presented today, March 11th, in the Androgeo Hall, of the Heraklion Municipality. During the event, a documentary will be shown, titled “In his own image”.

Saint Eutychius was Bishop of Gortyna and Archbishop of Crete. It is assumed that the saint lived during the Arab conquest of Crete (827-961 AD). His head is kept in the Monastery of Odigitria (in Messara), one of the oldest monasteries in Crete.

Researchers and artists collaborated in the project of the saint’s facial reconstruction. Their work was first presented during the 1st Interdisciplinary Conference of Messara, last September.

In a press conference about today’s event, the metropolitan of Messara and Arcadia Makarios pointed out that this is an internationally original scientific work, and that the reconstruction of saint Eutychius was based on the tradition of Byzantine religious painting.

The organizers of the event stressed that the local society will have the opportunity to listen to a popularized analysis of the methods used by forensic medicine, in order to reconstruct the face of humans who lived centuries ago. Apart from the delicate and difficult work of the facial reconstruction, the scientific group conducted an innovative survey about the way the face is being depicted in arts, and the relationship of the “prototype” with the faces we know from Byzantine religious painting.

The initiative for studying the saint’s head came from the Department of Forensic Sciences of the University of Crete. At first, the researchers created a digital copy. Then, they constructed a three-dimensional copy of synthetic material at the Technological Institute of Crete. Specialists of the Plastic Surgery Department and the Dental Department investigated further details to reconstruct the saint’s face. Finally, artists studied how the saint was depicted in sculpture and Byzantine religious painting.