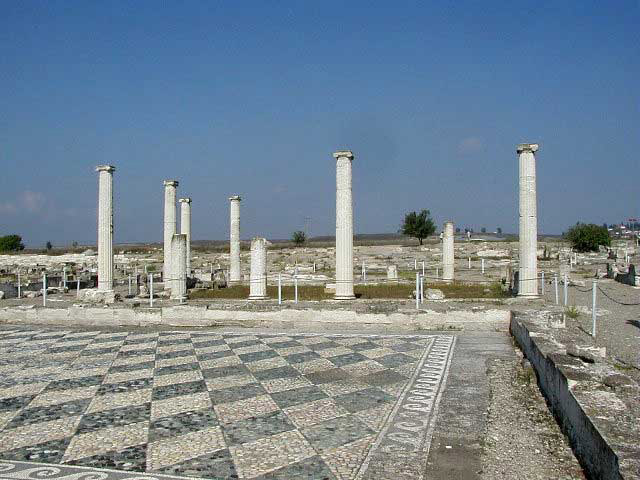 A lecture by Prof. Ioannis Akamatis

Excavation is under way at the trade and administrative centre of Pella, the capital city of Philip and Alexander the Great. In an open area covering more than 70.000 sq.m. in the heart of the ancient city, around a massive central square, gradually comes to light a complex of stoas with rooms housing the city archives, the city councilmen’s seat, other public offices, workshops and shops.

New data from the university excavational programme in Pella’s “Agora” will be presented by Prof. Ioannis Akamatis (Professor of Classical Archaeology, Department of History and Archaeology, Aristotle University of Thessaloniki) and his colleagues during the annual Conference for the Archaeological Work in Macedonia and Thrace.

As stated in the lecture’s abstract: “During Season 2012 in the University’s excavation, research was focused on the North and East stoa, the central yard and the public archive area of Pella, aiming to gather additional evidence connected with the final publication of the building complex”.

Regarding the North Stoa, the text reads: “Aiming to complete the excavational procedure in order to proceed to the ESPA-funded works of conservartion and restoration proposed by the Aristotle University’s Archaeology Division and materialized by the Credit Management Fund for Archaeological Works, we cleared a number of rooms reaching a destruction level marked by roof tiles. A large number of roof tiles were sealed with the inscription BΑΣΙΛΙΚΟΣ, while others bore sealings with monograms and names with additional monograms.

“The finds, smaller in number compared with those of the Eastern Stoa, consist of common use and storage jars, loomweights, coins and some metal objects. Overall, the finds of the destruction level found on the last floor lead us to the late 2nd century B.C. -possibly up to the beginning of the 1st century B.C. The above statement means that the preliminary image of the portable finds is not different to the well documented image of the final destruction of the Agora and the Hellenistoc Pella in general, which is dated to the beginning of the 1st century B.C.

“Large sections of the rooms’ walls consist of material in secondary use, after a widespread, possibly natural, destruction, while the first steps of stairways leading to floors were found in all the well-surveyed sites. As a result, the problem of whether there was a floor covering the whole  65 m. long Northern side of this uniquely large complex has been solved.

“Hoards of bronze coins found under the earlier floors, as well as pottery finds date to the last quarter of the 4th century B.C. As a result, the construction of this wing around the end of the 4th century is being confirmed. This date is also confirmed by a large amount of pottery found in the foundation debris of the building’s first phase”.

Regarding the Eastern Stoa, Prof. Akamatis reports: “During this year’s season, as well as during the previous year’ s one, in the Eastern Stoa there has been limited research under the floors of several rooms, aiming to gather information on the use they had before the final phase […]. Furthermore, we have confirmed the gradual change in the height of the road pavement along the centuries due to dumping various kinds of waste from the shops and workshops -an activity that also demonstrates the financial strength of the city”.

According to Prof. Akamatis, “In this area, trial trenches brought to light a rectangular building surviving up to the height of its foundation as it had been systematically looted up to the height of its euthynteria, which was made of large cornerstone blocks. Despite the looting, a large part of the tiles’ destruction level -made of Laconic-type tiles- still survives.

“The building is free-standing from all sides and it is divided into two disequal rooms by a transverse wall. It is naos-shaped and its external dimensions are 16,20×7,90 m. Remains of Doric column drums and parts of column and pilaster capitals found in its Northern side are possibly demonstrate an entrance characterised by two columns between pilasters. Τhe efficiency shown in placing the well-treated foundation stones demonstrate the sophisticated level of the building’s construction, which is also confirmed by the presence of red, white and black plaster. The building’s research is to be completed during the next academic season. The final aim of this research is to restore the temple’s architectural form and to identify the deity worshipped in it through the collection of finds located in it as well as the area surrounding it. Its position is central. The block where it was built remained free to serve the needs of the cult. As a result, the deity worshipped in it must have been important for the city of Pella and the Macedonian Kingdom”.

During the present digging season, a large number of coins has been found, among which some were made of silver, while there was also a large number of pottery storage jars with sealed handles. The finds also include several partially surviving figurines, lamps and metal objects.

Α considerable number of students from Universities in Greece and abroad took part at the excavation’s educational programme. The students were trained in methods of archaeological survey, basic principles of conservation, recording and digital documentation.

Prof. Akamatis’ lecture will take place on Thursday, 21st of March 2013, at 10.45 am, at the Ceremonial Ηall, the Old Building, School of Philosophy, Aristotle University of Thessaloniki, in the framework of the Annual Conference for the Archaeological Work in Macedonia and Thrace.