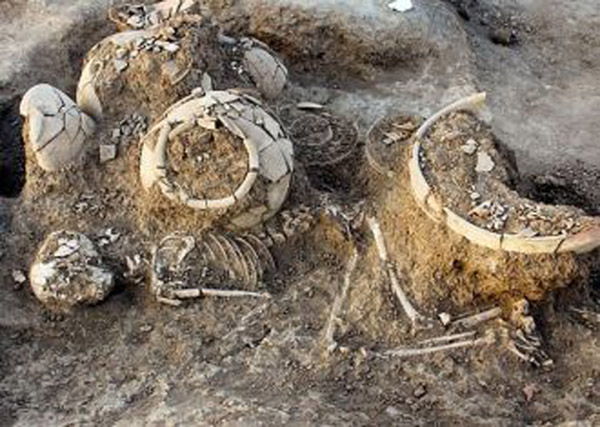 Traces of an international culture with major similarities to the Oxus civilization, otherwise known as the Bactria–Margiana Archaeological Complex, have been discovered during an archaeological excavation in the prehistoric site of Chalo near the town of Sankhast in North Khorasan Province, Iran.

The excavation has been carried out by a team of Iranian and Italian archaeologists, the Iranian director of the team, Ali-Akbar Vahdati, told the Persian service of CHN on Saturday.

The terms Oxus civilization and Bactria–Margiana Archaeological Complex (BMAC) both designate a Bronze Age civilization of Central Asia. The civilization, which dates to ca. 2300–1700 BC, was developed in present day northern Afghanistan, eastern Turkmenistan, southern Uzbekistan and western Tajikistan, centered on the upper Amou Darya (Oxus River). Bactria was the Greek name for the area of Bactra (modern Balkh), in what is now northern Afghanistan, and Margiana was the Greek name for the Persian satrapy of Margu, the capital of which was Merv, in modern-day southeastern Turkmenistan.

The culture was highlighted by the pioneering work of Russian-Greek archaeologist Victor Sarianidi from 1976 onwards. Sarianidi’s excavations revealed numerous monumental structures at many sites, fortified by impressive walls and gates.

“In the first season of excavation, we found some ornamental artifacts that had surfaced as a result of agricultural activities by the locals,” Vahdati said.

“Based on previous studies, the BMAC was only limited to the sites located in Central Asia: in present day northern Afghanistan, eastern Turkmenistan, and some regions in Tajikistan, but the first season of excavation showed that the Chalo site is also part of this great culture,” he added.

The team identified residential areas, a storage space, and a cemetery, where 14 trenches were dug revealing skeletons laying on their right sides in an east-west position. “In most of the trenches, we discovered graves exhibiting signs of the BMAC. Environmental factors have caused serious damage to the graves, which have been discovered in upper layers of the ground,” Vahdati stated.

“A variety of stoneware, earthenware, stone and metal ornaments has been discovered in the graves. All bodies had been buried with metal bracelets and bonze pins, which were used to fasten clothing. Most of them were buried with necklaces and earrings made of stone and bone. All the artifacts unearthed from the graves have the same characteristics identified for the BMAC in Central Asia”. The artifacts actually bear designs of dragons, snakes, scorpions, and other animal motifs.

Vahdati said people had inhabited the area before it was converted into a cemetery.

“Storage spaces dating back to 3700 BC have been discovered at the site. Large pots which were used for storing grains and other agricultural products have been dug out in the spaces,” he added.

“We have found seeds of grain, barley and grapes. The grapes were likely used for production of vinegar or a special drink,” he stated.

Vahdati said, “Chalo reveals details of the BMAC in Iran. Maybe it is better to call it the Greater Khorasan culture, because parts of Merv, Samarkand, and Bukhara were under the influence of Greater Khorasan.”