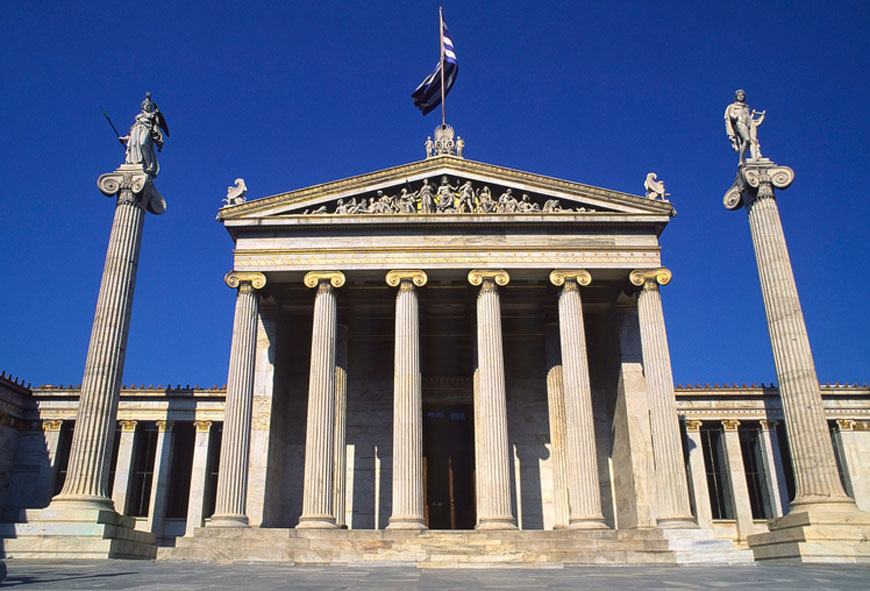 No fence for the Academy of Athens

The proposal for the protection of the monument has been rejected

The members of the Central Council for Modern Monuments have opposed to the idea of fencing the Academy of Athens, arguing that an enclosure would distort the public character of the institution.

Vandalisms on architectural members and sculptures, graffiti on the walls, and the fact that the surroundings of the Academy have become a hangout for drug-addicts, led the Academy of Athens to the decision of placing a fence to protect the surrounding area of the monument, which, according to the administration of the institution, is property of the Academy.

Furthermore, in a letter to the Directorate for the Restoration of Modern and Contemporary Monuments / Ministry of Education, Religious Affairs, Culture and Sports, the General Secretary of the Academy Vasileios Petrakos writes that it is a common phenomenon that dead or half-dead drug users lie behind the sculptures of Athena and Apollo. Mr. Petrakos adds that the outdoor area of the monument has become a shelter for drug addicts and drug dealers. “Every morning members of the Academy personnel pick up needles and other objects used by drug addicts,” he points out.

According to the preliminary study the Academy of Athens has subjected to the Central Council for Modern Monuments, a fence of 3,4 m height should be built at the western, eastern and southern side of the Academy. Also a wooden structure imitating the wall façade for the protection of the narrow parts of the western side facing the pedestrian street Patriarchou Gregoriou should be erected.

The study was rejected by the majority of the Council members, according to which the fence does not serve the public character of the Academy.

“The subject of fencing or not a public space par excellence is of major importance,” as the vice president of the Legal Council of the State Nikolaos Mavrikas stressed.

“The protection of monuments cannot be accomplished by building protection structures. The building of the Academy was designed so that it would be open to the public, as it is the leading centre of intellectual dialogue. Furthermore, it has been designed according to the concept of the trilogy. If a fence is placed around it, what will happen to the other [two] buildings?” asked the Assistant Professor of Architecture at the University of Thessaly, George Tzirtzilakis.

The members of the Council also expressed their concern whether such an intervention would be compatible with the plan of pedestrianizing the Panepistimiou street, in which the Athenian Trilogy has the “leading part”.