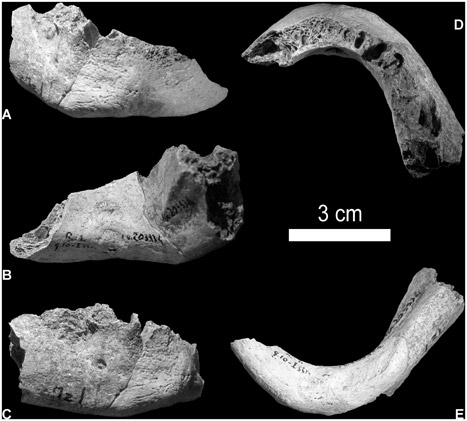 The skeletal remains of an individual living in northern Italy 40,000-30,000 years ago are believed to be that of a human/Neanderthal hybrid, according to a paper in PLoS ONE.

If further analysis proves the theory correct, the remains belonged to the first known such hybrid, providing direct evidence that humans and Neanderthals interbred. Prior genetic research determined the DNA of people with European and Asian ancestry is 1 to 4 percent Neanderthal.

The theory was the outcome of research performed on an individual’s jaw, unearthed at the Riparo di Mezzena rock-shelter (Monti Lessini, Italy). Accodring to Silvana Condemi (CNRS research director, University of Ai-Marseille), who examined the remains using DNA analysis and 3D imaging, the jaw’s size was somewhere in-between the receding jaw shape seen in Neantherdals and the protruding one characterizing Homo Sapiens (modern humans). The  individual’s mitochondrial DNA -transmitted from mother to child- was also Neanderthal, indicating that a female Neanderthal might had mated with male Homo Sapiens.

As Condemi and her colleagues wrote, the mandible supports the theory of “a slow process of replacement of Neanderthals by the invading modern human populations, as well as additional evidence of the upholding of the Neanderthals’ cultural identity”. The research team hints that the modern humans may have raped female Neanderthals, bringing to mind modern cases of “ethnic cleansing.”

According to Neantherdal expert, paleoanthropologist Ian Tattersall (curator emeritus at the American Museum of Natural History), the hypothesis, presented in the new paper, “is very intriguing and one that invites more research”.