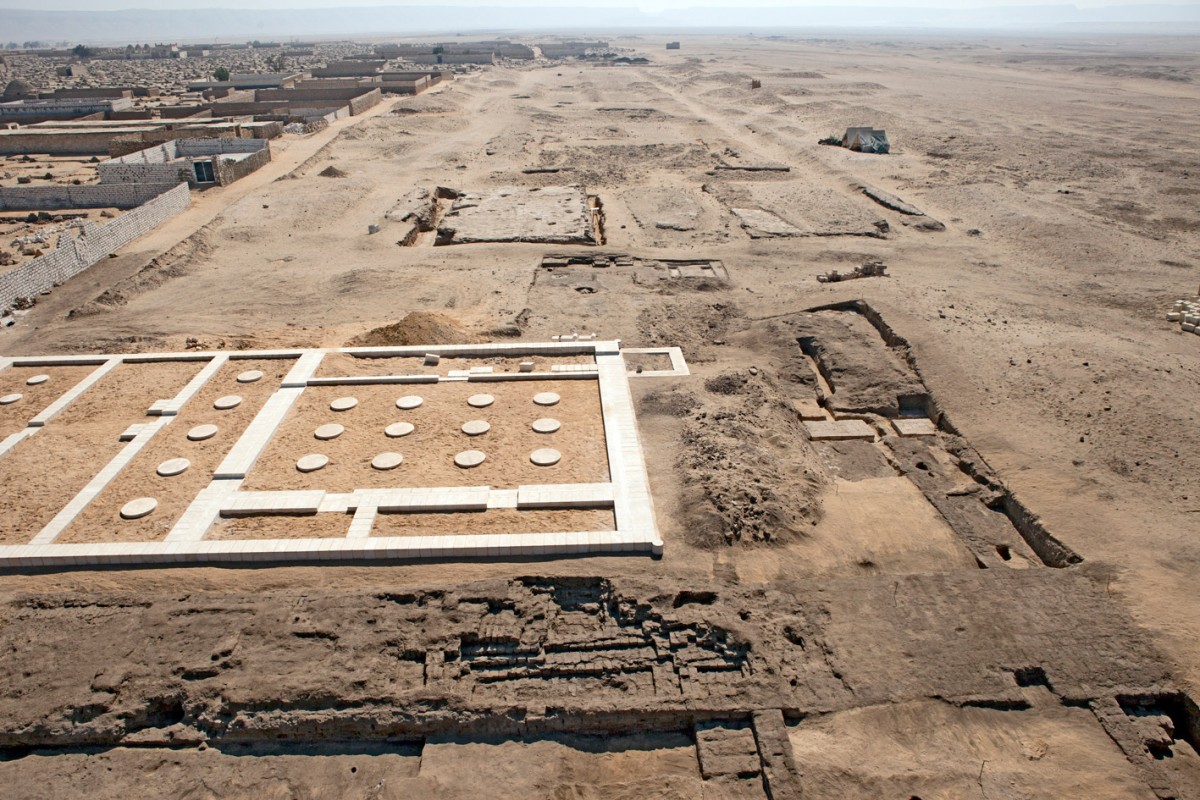 Staring at the sun

During March 2013 the works were focused on the Great Aten Temple and the small stone palace. At the palace, a team of builders put the finishing touches to its outlines, laying larger and more carefully cut limestone blocks to define the building’s layout.

At the temple,  a large dump over the northern pylon and ground outside, made during previous work on the site by the now historical mission directed by Pendlebury had completely gone, fully exposing the brickwork of the pylon. This now needs to be repaired and built up with new bricks to a slightly greater height. Beside it, on the south, comes the outer temple ramp, of brick retaining walls and sand fill, 9.15 m wide.

It is planned that the site will be accessible to the wider public, by making a viewing platform. “What might be the view in a few years’ time? The viewing area will run for twice the present length, to include the southern pylon as well, so that the access ramp stands in the centre”, the fieldwork report reads.

Beyond the pylon, the team has located a broad flat surface of compacted mud that runs up to the monumental front to the stone temple, 30 m behind the brick pylons. It is stated that “This open space had brought people in – members of the public? – to perform offering-ceremonies on the mud bases surrounded by gypsum-lined troughs, a practice that had begun when the temple site was first laid out. Unfortunately, these are too fragile to leave exposed but it should be possible to devise a way of marking their locations. They seem to represent regular participation in a more modest style of worship, separate from the grand setting created by the stone architecture. The small stone palace, if such it really is, belongs within this zone and seems to lack the kind of separation of the king from modest cult surroundings that one might have expected”.

Another plan of the working team is to rebuild the pylon foundations at the monumental front to the stone temple as well as to mark the position of columns forming a deep colonnade inside the temple, before its famous open spaces. The column bases are to be marked using circular pads of white cement. As for the open courts themselves, the team is working on defining the height of a number of offering tables put there during Akhenaten’s time. In the report it is stated that “The tomb pictures show them standing to around waist height. This year’s re-excavation of the area of the temple axis, as it had stood in the very first phase of use, brought to light two rectangles of limestone blocks that remained undamaged (they are visible in pictures 01 and 02). They might be supports for pieces of sculpture, although they held no trace of mortar to anchor something like that. Or they could be offering-tables (perhaps originally covered with a large mat, which would explain the rough surface). What is to be noted is that they were made to lie at the same level as the surrounding ground. Might this have applied to the main mass of stone offering-tables, that they were more or less at ground level? It might have made them easier of access”.

Finally, the work on the site has led us to define the actual form of the temple facade, where large quantities of polychrome hard stones had been used, in order to give a unique, luxurious appaerance to the monument. Also, several stone pieces are coming from inserts “laboriously worked to fit into a gap in backing stonework where damage had occurred or there was a flaw in the stone”, implying that areas of the temple were made from hard stones – especially the marble-like indurated limestone – and were decorated with scenes in addition to the usual range of Aten formulae. Such hard stone blocks might have been much larger than the modest, standardized size of the common limestone blocks.

The work at the front of the Great Aten Temple is only the first part of the 2013 schedule of work while the archaeologists are heading for more surprising finds.