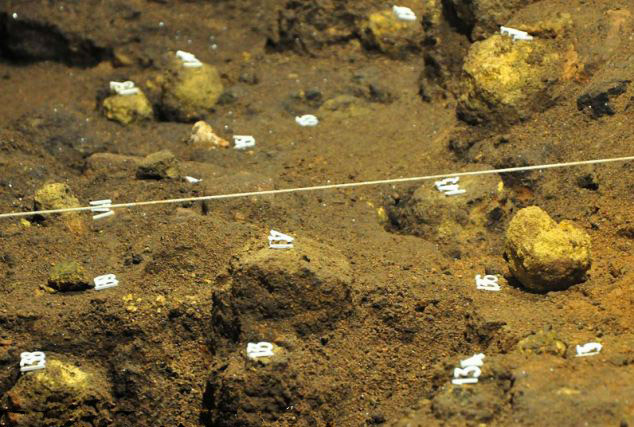 Scientists baffled by hundreds of spheres found in hidden tunnels in a Mexican cave.

Hundreds of yellow spheres have been found scattered in hidden chamber deep beneath the pre-Hispanic Temple of Feather Serpent in Teotihuacan, Mexico.

The discovery took place when a robot called Tláloc II-TC, which had been scanning the tunnels under the temple area courtesy of Mexico National Institute of Archaeology, located the orbs using infrared scanners. The spheres range from 1.5 to 5 inches in circumference and appear to have been made of gold. However, they are actually made of clay and they take their yellow colour as they are covered in jarosite (a bi-product of the oxidisation of pyrite). The walls in the chamber were also found to be dusted in pyrite, which gave it an appearance of a gold room.

Archaeologists from the Institute admit they lack any idea on the orbs’ character, although they connect them with some kind of religious ritual due to their context. They also think that the orbs would have been used by ‘high-ranking people, priests, or even rulers’ to perform such rituals within the tunnels.

Jorge Zavala, an archaeologist on the dig said: ‘They look like yellow spheres, but we do not know their meaning. It’s an unprecedented discovery.’

When Teotihuakan was abandoned, almost 50,000 high-value objects including jade, stone, shell and pottery, such as ceramic beakers, were thrown underground the Feathered Serpent Temple, blocking the tunnel’s entrance.

Earlier this year, the archaeologists and their remote-controlled robot located  three passages under the Temple, in a spote they expected to find only one passage. The discovery of these hidden passages and golden orbs could be highly important. In 2010 experts said a tomb discovery would be significant because the social structure of Teotihuacan remains a mystery after nearly 100 years of archaeological exploration at the site.