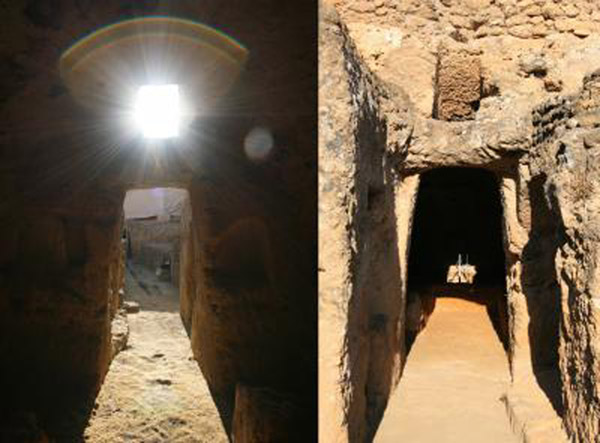 A temple converted into a tomb near Seville, Spain

The funerary function of the so-called Elephant’s Tomb in the Roman necropolis of Carmona (Seville, Spain) was not its primary one, new study suggests. On the contrary, the original structure of the building and a window through which the sun shines directly in the equinoxes indicates it might have been built as a temple of Mithras which was later converted to a tomb.

The Elephant’s Tomb (named after an elephant-shaped sculpture found at its entrance) is one of the most characteristic monuments found at the Carmona necropolis (Spain), a collection of funeral structures from between the 1st century B.C. and the 2nd century A.D. The origin and function of the construction have been the subject of much debate. Archaeologists from the University of Pablo de Olavide (Seville, Spain) have conducted a detailed analysis of the structure and now suggest that it may originally not have been used for burials but for worshipping the God Mithras, chief deity to an unofficial cult that was widespread throughout the Roman Empire during the early Christian era.

“In some stages, it was used for burial purposes, but its shape and an archaeoastronomical analysis suggest that it was originally designed and built to contain a Mithraeum (temple to Mithras),” explained Inmaculada Carrasco, one of the study’s authors.

Carrasco and her colleague Alejandro Jiménez focus their studies on a window in the main chamber built during the first of the building’s four construction stages. Earlier studies had already suggested that the purpose of the window was not to provide light, but that rather it may have served a symbolic and spiritual purpose.

“From our analysis of the window, we have deduced that it was positioned so that the rays of the sun reached the centre of the chamber during the equinoxes, in the spring and autumn, three hours after sunrise” explains Carrasco.

The authors suggest that at that moment a statue of the tauroctony, the statue of Mithras slaying the bull (which has been lost), would have been illuminated. In addition, during the winter and summer solstice, the sun would light up the north and south walls respectively. Moreover, the position of the heavenly bodies at that time in the 2nd century reinforces the theory that the building was constructed for Mithraic worship, a religion that gave considerable importance to the constellations. As the sun shines through the window during the spring equinox, Taurus rises to the East and Scorpio hides to the West. The opposite occurred during the autumn equinox.

Taurus and Scorpio were of special significance to the Mithraics. The main image of the cult is that of the God Mithras slaying a bull, and in the majority of these images there is also a scorpion stinging the animal’s testicles.

Other constellations such as Aquarius, Orion or Leo, which were also of significance in this religion, appear in the path of the sun in the equinoxes and solstices at that time.

Moreover, according to the authors, the Moon, although having a secondary role, may have lit up the face of Mithras with a full moon on nights near to the equinoxes.

Apart from the window, the architecture of the original building has similarities to other Mithraic constructions. According to Carrasco, “an underground structure, with a room divided into three chambers, with a shrine or altar illuminated by the window at the head. The presence of a fountain is also highly significant as these are commonly found in the Mithraeums”. According to the authors, after its period as a Mithraic temple, the building was renovated three more times, giving it new functions more in line with the functions of a necropolis. A burial chamber was built and at a later date, the roof was removed, leaving open courtyards. Finally, it was filled with rubble and used as an area for burials.

Regarding objections to their theory which suggest that a necropolis is an uncommon site for buildings used for this cult, Jiménez says:.

“A similar case is that of Sutri (Italy) where the Mithraeum is on the outskirts of the town. The structure in Carmona is in a multi-purpose space, next to the Via Augusta which connected Cadiz to Rome, close to the amphitheatre and the circus, and consequently its position should not be considered an objection”.