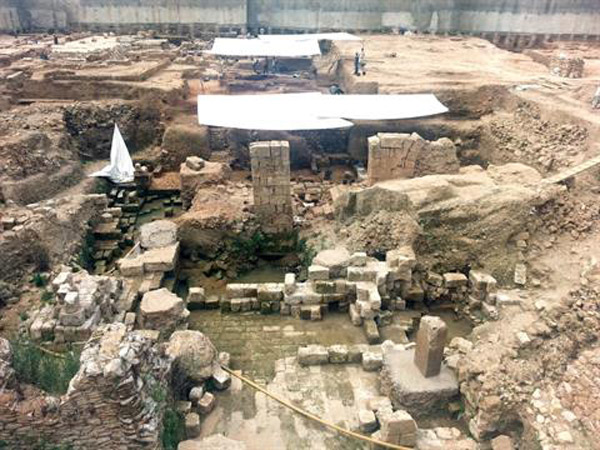 The Romans vs Jean Nouvel

An ancient gate that could probably represent the primary entrance to the Roman city that once occupied modern Beirut has been found by archaeologists digging at Riad al Solh Square, Beirut, Lebanon. The find came to light on the exact spot where part of The Landmark Project -a multipurpose development initiative designed by renowned French architect Jean Nouvel- was to materialize.

The gate dates back to the 1st century AD and if any connection between this and other finds in the area is confirmed, it will represent one of the archaeological mission’s most important finds to-date. “The remnants uncovered on the site, among others, have various characteristics that we believe are part of the southern Roman gate of the ancient city of Beirut”, says one of the archaeologists who wishes not to be named, as, according to regulations from the Culture Ministry’s Directorate General of Antiquities’ orders, finds are not supposed to be disclosed.“Our findings could be very similar to Palmyrene Gate Dura-Europos in eastern Syria,” the archaeologist added.

The same archaeologist supports that more work needed to be done to unearth what is left of the ruins and to understand their historical importance. However, he pointed that the Directorate General of Antiquities’ plan to continue digging contradicts the Ministry of Culture’s plan to support the revival of The Landmark Project, that came into a halt when excavations started seven years ago.

Meanwhile, the destruction of other archaeological findings in Downtown Beirut continued this week after the Culture Ministry approved a demolition order for a number of other ancient sites just blocks away from Riad al-Solh Square.

A bulldozer razed through part of an archaeological site Tuesday afternoon. Officials on site said the order came after the culture minister approved another project, called District S, which requires the sites of some ruins to be overhauled and reconstructed.

“The minister approved the continuation of the [District S] project’s work today and the [area of the] ruins will be included the project,” said Ziad, an official supervising the excavation work.