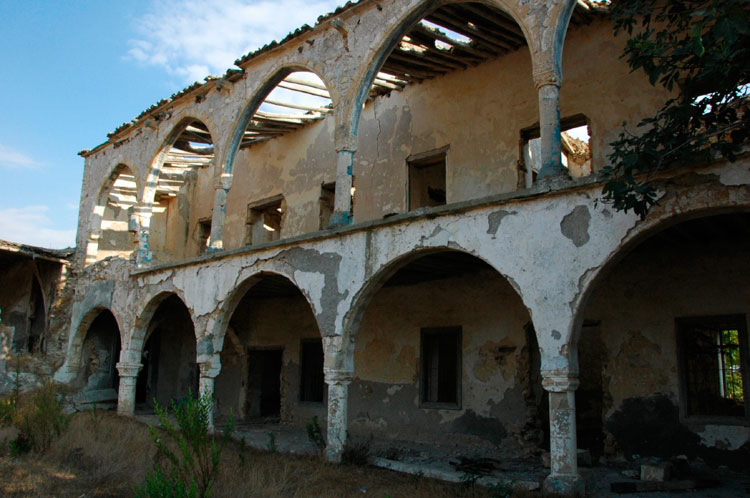 SOS for the Agios Panteleimon Monastery in Myrtou

It is on the verge of collapse

The monastery of Saint Panteleimon in Myrtou (Northern Cyprus) is on the verge of collapse. After the Turkish invasion the monastery was turned into a Turkish military camp. Soon after the boundary restrictions in divided Cyprus were relaxed by the Turkish Cypriots in 2003, and crossing points opened, the monastery was abandoned, probably because it wasn’t safe anymore for the occupation army.

Until 1974, the monastery was one of the most significant Christian pilgrimage sites of Cyprus. Today, even the word “depression” cannot describe the feelings evoked at the sight of the collapsing monastery. Agios Panteleimon as other monuments in the occupied territory of Cyprus remind us of the destroyed churches and monasteries in Asia Minor, where the violent deportation of the Greek population left nothing but the buildings’ carcasses.

The restoration works that had started two years ago in some of the cells, in the framework of the Joint Committee for the Conservation of Cultural Heritage Monuments, have stopped.

The worst sight awaits the visitor who enters the church (Katholikon): at the windows there is barbed wire, the main entrance is closed, while the south door gapes open, so that apart from people animals can easily get in.

It should be noted that on one of the exterior walls of the church one can see, faded throughout the years, the emblem of the Greek military junta of 1967.

The history of the church goes back to the 5th century AD, when, according to tradition, two monks from Asia Minor came to Myrtou bringing with them an icon of Saint Panteleimon, where a piece of the saint’s finger was hidden. The icon and the pieces of the holy bones have caused many wonders among the Christians of the region. To show their respect to the saint, they built a church and a monastery dedicated to him. The monastery was probably built in 1735, the year when the Russian monk Vasileios Barsky visited it.

During the Turkish rule, the monastery was renovated by the metropolitan bishop of Kyrenia Chrysanthus. At that time a two-storey building was added at the south and the west of the monastery, to meet the needs of the monks and the metropolis of Kyrenia, which had its see at Myrtou until 1917. The Katholikon is a two-aisled vaulted building, that was decorated with wall-paintings and a wooden iconostasis of exquisite art made in 1743. The valuable post-byzantine icons of the iconostasis have been stolen by the Turks.

During the 19th century, the monastery housed a Greek school. The bell tower, built in 1839, is one of the first of the Ottoman rule period. Although the monastery was turned into a military camp, two bells are preserved in the bell tower.

At the beginning of the 20th century, ten monks lived in the monastery, the last one being Sofronios Michailides, who died in Myrtou on July 27, 1976, the day Saint Panteleimon is celebrated.