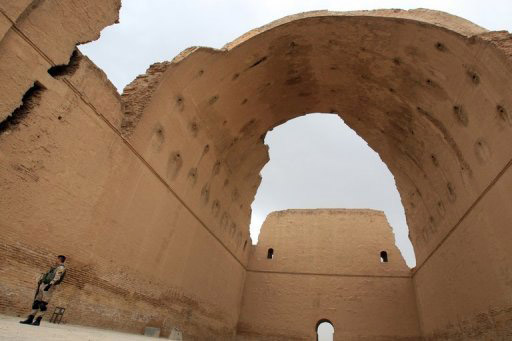 Arch of Ctesiphon to be restored

In order to boost tourism in Iraq

The 6th century Arch of Ctesiphon, the world’s largest brick-built arch and the last structure still standing from the ancient Persian imperial capital Ctesiphon, south of Baghdad in modern day Iraq, is to be restored in the framework of a 10-month restoration plan.

Iraqi authorities have contracted a Czech firm to carry out the plan with the hope to boost tourism in the area. Once a massive tourist attraction, alongside its neighbouringtomb of Salman Pak (Prophet Muhammad’s companion) , the monument that reflects a peak of the Persian craftsmanship now shows signs of serious decay: a massive slab fell off late last year as a result of damp caused by heavy rains.

“We began our work here a short while ago, carrying out studies on the site,” said Imad Abu Aqlam, the Iraq manager working for the Czech company Everis, adding that surveys are expected to be completed next month. “The restoration process requires about 10 months -that includes securing the bases of the site, treating the damp, and supporting Taq-i Kisra to ensure that no parts fall off it in the future.”

Construction of the Arch began in 540 AD during the Persian Sassanid dynasty’s long wars with the Byzantine Empire. It formed part of a palace complex started three centuries earlier and, at 37 metres (122 feet) tall and 48 metres (158 feet) long, is the largest brick-built arch in the world. It lies about two kilometres (1.2 miles) from the tomb of Salman Pak, who was originally Zoroastrian but converted to Christianity, and was later sold into slavery to a Jewish family in Medina in present-day Saudi Arabia, before converting to Islam. In 2004, the Global Heritage Fund said that, as a result of disrepair, the arch was “in danger of collapse”.Officials hope a restoration of the arch will revive the whole area, known as Madain, as a tourist destination, but for now, the area is closed off to visitors, with prior approval required for anyone wanting to take a look.