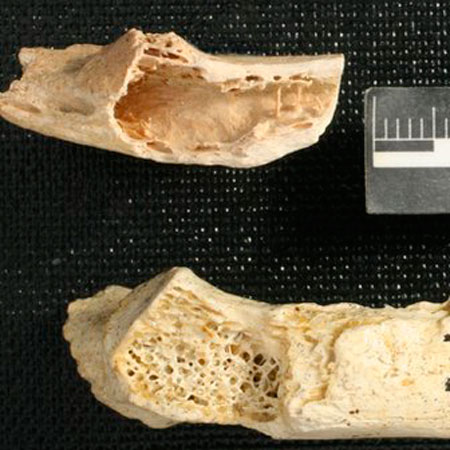 The oldest tumour found in the human fossil record

Fibrous Dysplasia in a 120,000+ Year Old Neandertal from Krapina, Croatia

A fossilised Neanderthal rib found in a shallow cave at Krapina, Croatia, showed signs of a bone tumour. The Neanderthal lived 120,000 years ago. Until now, the earliest known bone cancers have been identified in ancient Egyptian mummies from about 1,000-4,000 years ago.

The team, led by University of Kansas anthropologist Dr David Frayer, published their research in the journal PLOS One, noting that “Tumors of any sort are a rare occurrence in recent archaeological periods or in living primates, but especially in the human fossil record.”

“Finding evidence of tumors and evidence of cancers, is – I don’t know if I want to say ‘lucky’ – but there isn’t a lot of evidence for it,” said Frayer. “It shows that living in a relatively unpolluted environment doesn’t necessarily protect you against cancer, even if you were a Neanderthal living 120,000 years ago,” he added.

The microCT scan found that the ‘spongy bone’ which should be on the inner part of the fragment was missing and may have been ‘eaten away’ by a soft-tissue tumour. This type of tumour is seen in modern-day patients and is called fibrous dysplasia.

Fibrous dysplasia is an abnormal bone growth where normal bone is replaced with fibrous bone tissue. It can cause abnormal growth or swelling of the bone and although it can occur in any part of the skeleton, it is most commonly found in the skull, thigh, shin, ribs, upper arm and pelvis.

The cancerous rib is an incomplete specimen, so the overall health impact of the tumour on the individual cannot be established. Although efforts to extract ancient DNA from the Neanderthal fossil have proved unsuccessful, the researchers hope other fossils may shed light on cancer in prehistoric humans.