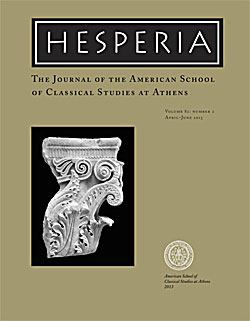 Hesperia 82/2 (April-June 2013), The American School of Classical Studies at Athens

The new issue of Hesperia 82/2 is available online. Topics in this issue include Pausanias and classical archaeology; the oath of the Athenian ephebes; cult at the Argive Heraion; inscriptions from the Agora; and water displays in Imperial Corinth. Subscribers can read the issue online at JSTOR, which now hosts all current issues of Hesperia as well as an archive of past volumes.

Editorial: A good-bye from the Editor.

“Most Worth Remembering”: Pausanias, Analogy, and Classical Archaeology, by Daniel Stewart, considers the way in which archaeologists use Pausanias’s text to inform their understanding of the material record.

The Place of Publication of the Ephebic Oath and the “Oath of Plataia,” by Danielle Kellogg, explores the relationship between a stele bearing two well-known inscriptions and the particular place in which it was erected.

Artemis and a Hero at the Argive Heraion, by Christopher Pfaff, presents previously overlooked evidence for subsidiary cults of Artemis and an anonymous hero within the Argive sanctuary of Hera.

Greek Inscriptions from the Athenian Agora: Fragments of a Financial Nature, by Michael Walbank, publishes 28 epigraphical fragments from the Agora that pertain to financial issues.

Playing in the Sun: Hydraulic Architecture and Water Displays in Imperial Corinth, by Betsey Robinson, discusses the springhouses and fountains in Roman Corinth and highlights their many purposes, from protecting and providing water to serving as a highly expressive symbolic medium.