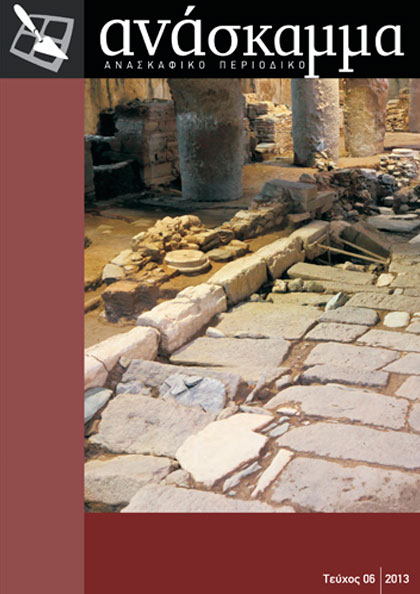 As written on its website, Anaskamma “circulates with the ambition to give a solution to the problem of excavations that lose their discoveries in mysterious, inaccessible drawers, instead of enjoying them as multicolored, accessible publications; a solution that is neither the only one, nor the best one. It still is a solution, because it deliberately exceeds the error of the “minefield”, a rightful comparison of the excavational procedure, since the very first mistake of the excavator is also the last one. It exceeds, also, what many say, that excavation actually equals to “destruction”. These over shootings become a reality in a very simple way: Anaskamma offers its pages for the publication of short or extended articles, statements or simple notes, their content being exclusively dealing with an excavation: the discovery of an excavation or the theoretical approach of an excavational problem; Anaskamma offers its pages to short or extended articles that will be trapped, or, at least, to those that will admit that they are trapped in the usual suspensions: in all those well known archaeological phobias, caused by the refusal of archaeologists to accept that an archaeological conclusion can, in a lot of cases, be nothing more than the recording of a “first impression”; this direct enthusiasm or the disappointment that the excavator/archaeologist feels in front of his personal minefield; the first impression that compiles the reason for the excavator to think, to speak and suppose; without, believing that, what he or she will write down, will be the final conclusion. Final conclusions do not exist in archaeology; just emotions and dreams; mainly dreams”.

At the end of each article, there is a summary in English.

Pantos A. Pantos – The legal framework for the archaeological excavations in Greece: From the 20th to the 21th century

*Anaskamma is available at the bookstore Λογότυπος of the Aristotle University of Thessaloniki, Building of Administration, 54126, Thessaloniki, tel. 2310997249