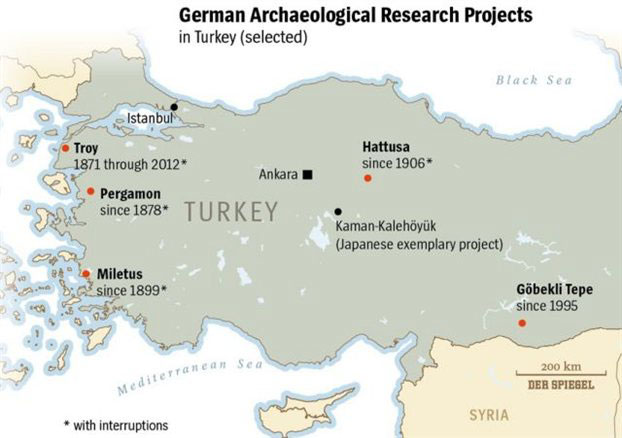 German archaeologists are still waiting to get excavation permits

The dig season has begun but the Turkish government in Ankara has still not granted annual permits to foreign archaeologists, especially Germans. There is concern that the reason for the delay has to do with politics and nationalism.

The “accusation” was made by the German SPIEGEL which covered the 35th Annual Symposium of Excavations, Surveys and Archaeometry in Mugla (southern Turky). According to the report, German archaeologists “ have reason to worry”, as the delay could be a response to the comments made by the head of the Prussian Cultural Heritage Foundation, Hermann Parzinger, who a year ago said that “Turkey doesn’t have an established system for preserving historical artefacts” and that cultural heritage “is the last thing they think about.”

Then the Turkish minister of Culture and Tourism, Ömer Çelik, told SPIEGEL that some German-led excavations in Turkey are sloppy. “There are many that simply leave sites however they happen to look at the end of an excavation, disorderly and without having been restored in any way – a deserted landscape,” he said.

On the other hand foreign archaeologists accuse the current Turkish administration for destroying noumerous significant archaeological sites in order to build things like dams, hotels and subways!

All this is part of a long quarrel between Germany and Turkey about the origin of Turkish antiquities that fill German museums. Many of these antiquities are ancient Greek, and were stolen or landed in Germany in some other dubious way, but there are also prehistoric and Ottoman works of art.

It should be noted that many of the sites excavated in Turkey are ancient Greek.