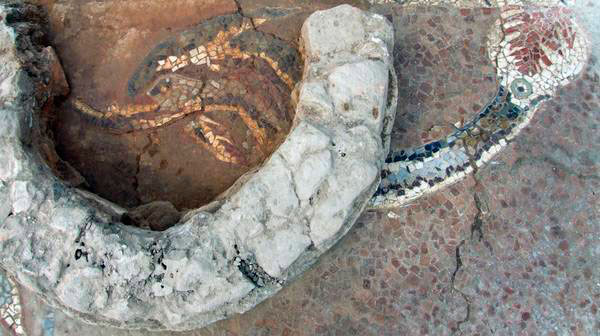 The largest and most articulated Hellenistic mosaic from Magna Grecia is believed to have been found in Monasterace Marina, ancient Kaulonia, in the southern Italian region of Calabria.

Last year, archaeologists Francesco Cuteri and Maria Teresa Iannelli (archaeological superintendant of Calabria), who supervise a team of archaeology students from all over Italy and from the college of Bahia Blanca, Argentina, had brough to light part of a mosaic depicting a dolphin and a dragon. This year they revealed the rest of the scene, showing a large dolphin fighting the dragon, another, smaller, dolphin and also a second dragon.

The area is now known as ‘the room of dragons and doplhins’, while the mosaic is considered one of the largest Hellenistic mosaics from Magna Grecia, as it spreads over a surface of about 30 square metres. The mosaic dates back between the end of the 4th and the first decades of the 3rd century BC.