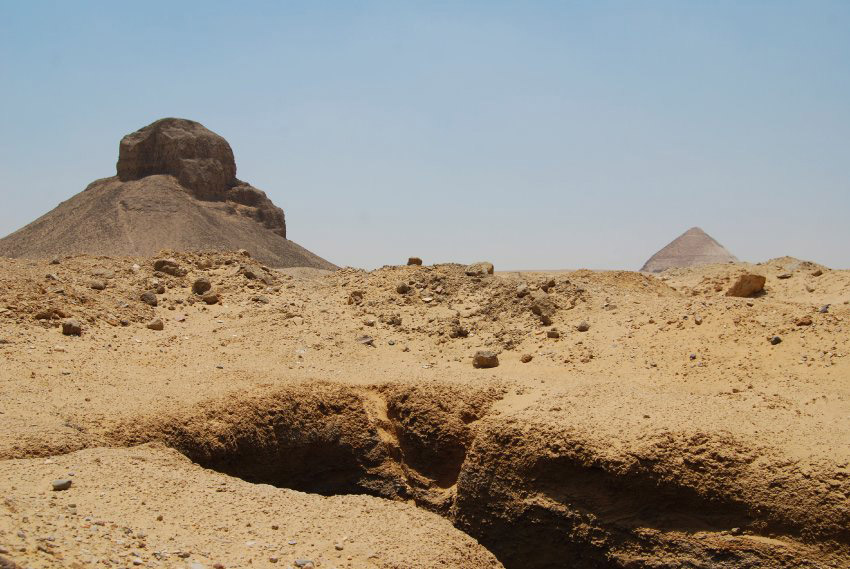 Tomb Raiding in Egypt: No Fun At All

A few hundred meters from the pyramids of Dahshur, the sandy-brown earth is full of holes. Dozens of open shafts lead into the depths, some up to seven meters (23 feet) long. Grave robbers have been at work. Lying belowground here in Dahshur is one of the oldest burial grounds in all of Egypt. Archaeologists have partially mapped it but never exhumed its contents, as is the case at many sites in Egypt.

Still, Dahshur is only the peak of the iceberg. Innumarable archaeological sites in Egypt -declared and not- are falling victim to tomb-raiding which, alongside illegal land-reclaiming, is the number one threat for culture in the country. Several month ago, El Hiba had made headlines, then the monuments of Arab el Hisn (ancient Heliopolis) came to the spotlight (set on fire shortly after having cleaned by activists). After July 29, the activist group Egypt’s Heritage Task Force reports damages through plundering in Abusir el Malek, several areas along the North Coast (Sanaqra, Tell Maria, Karam, Hemeida, Borg el-Arab and el-Amereya), Lisht, Akhmim,  Sheikh Abada and Tuna el-Gebel.

From the Pharaohs and Romans to the Greeks, Copts and Fatimids, Egypt bears the traces of many ancient civilizations. Not all of the treasures have been discovered and secured. Egypt has admittedly always had to grapple with the problem of grave-robbing. But since the revolution in 2011, “this phenomenon has increased even more,” laments Abdel-Halim Nur el-Din, a professor of archaeology and former head of the Supreme Council of Antiquities (SCA), the authority responsible for ancient relics and archaeological excavations in Egypt, now known as the Ministry of State for Antiquities. “Antiquities theft is a very profitable business,” says Professor Nur el-Din. “The government must make it a priority to stop the illegal excavations.” Guarding antiquities sites should be the focus, he adds. For everything else, such as excavation or restoration, there is simply no money anyway.

Gangs of Thieves Plunder at Will

In January 2011, the world-famous Egyptian Museum in Cairo was looted. Rioters destroyed priceless treasures. But valuable ancient relics went missing far from the capital, as well, due to a lack of supervision at historical sites. After the uprising, the repressive security apparatus withdrew everywhere, and the guarding of historical sites was neglected.

Two-and-a-half years later, the police are slowly venturing into the streets. But they are mainly concerned with ongoing protests. Elsewhere, some Egyptians are behaving as if the state and its laws have ceased to exist.

The army has placed two armored vehicles at the pyramids in Dahshur to deter grave robbers. But, so far, the thieves are undaunted. “We wanted to catch them,” says a guard in Dahshur who asked to remain anonymous. “But then they opened fire on us with automatic weapons.” He and his fellow guards were only armed with pistols. They jumped for cover, and the grave robbers carried on with their plundering.

The gangs are also getting bolder. At the pyramids of Saqqara, they advanced with weapons and cleared out a state-owned storehouse. According to the SCA department head in charge of the facility, it contained small statues. There have even been illegal excavations in the tourist centers of Aswan and Luxor, which experts attribute to organized gangs. Instead of shovels, some even bring along small excavators.

Still, the recent thefts are not even the most pressing concern for the SCA. Its offices are suffering from one of the country’s all-too-familiar power shortages. Employees are sitting in the dark, their computers switched off. Temperatures hovering around 43 degrees Celcius (109 Fahrenheit) are not helping matters, either.

Osama Mustafa Elnahas heads the division taksed with recovering stolen artifacts. He is aware that illegal excavations are going on up and down the country. “They have become a daily occurrence since the revolution began,” he says.

The Ministry of State for Antiquities still doesn’t know the actual extent of the lootings. Deborah Lehr, who runs the Paulson Institute, a Chicago-based think tank, has suggested that the US government should support the investigation by providing satellite images of the sites. But such plans have gotten stuck in the pipelines of the Egyptian bureaucracy.

As for the artifacts that have already been stolen, it’s likely they are irrevocably lost. Egyptian experts assume that many of the relics will end up abroad – beyond the reach of Cairo – and sold to collectors at places such as international auction houses.

“If we want to reclaim an artifact, we have to prove that it was registered as stolen in Egypt,” says Elnahas. A proper inventory of the stolen relics is something that the authority is unlikely to get around to, however, given the speed at which the plunderers are currently operating.