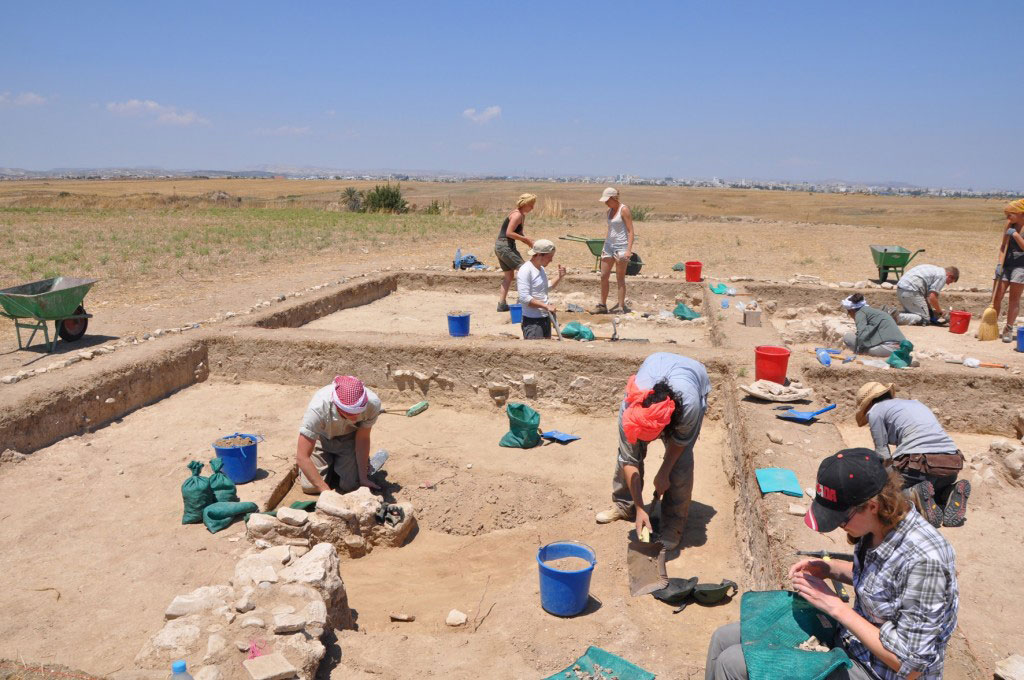 The University of Gothenburg has issued a press release about the finds of the archaeological expedition at the Bronze Age city Hala Sultan Tekke (around 1600–1100 BC).

“The finds include a facility for extraction of copper and production of bronze objects, evidence of production of luxurious textiles, as well as ceramics and other objects imported from all over the Mediterranean but also from central Europe.

‘One of our conclusions is that the Bronze Age culture in Hala Sultan Tekke played a central role in the Eastern Mediterranean. Cyprus served as an important node not only for regional but also for more long-distance trade. We have also realized that the city was larger than previously thought,’ says Peter Fischer, professor of Cypriote archaeology at the University of Gothenburg.

Hala Sultan Tekke is located near the Larnaca airport on the Mediterranean island of Cyprus and spans approximately 25-50 hectares, making it one of the largest Bronze Age cities in the Mediterranean region. In 2010, Peter Fischer and his team of archaeologists and students continued the excavations of the city that were initiated in the 1970s by Fischer’s former teacher, professor Paul Åström.

The recently excavated part of the city was discovered in 2012 using a ground penetrating radar, which is an electromagnetic equipment that makes it possible to ‘see’ what’s hidden in the ground down to a depth of about two metres. The method also enables archaeologists to get a tomographic image of a limited area under the surface.

‘This summer we discovered a residential area with facilities for extraction of copper from copper ore and copper slag. We found remains of melting furnaces and about 300 kilos of ore and slag. In a room nearby, we also found evidence of production of purple textiles, which were among the most valuable commodities during the Bronze Age.’

Next to the copper extraction facility, the archaeologists exposed living quarters where they also found many interesting objects, such as locally produced ceramics of high quality and ceramics from Mycenae (in present-day Greece) and the Levant (the Eastern Mediterranean countries).

The finds also include a complete decorated bronze brooch, probably imported from northern Italy or central Europe around 1200 BC, a decorated faience bowl from Egypt, faience cylinder seals depicting warriors and hunters and figurines of people/gods and animals. All finds can be dated to the period 1400-1175 BC.

‘The finds underscore the mobility of Bronze Age people far beyond their immediate surroundings. Their connections with Greece, Turkey, Egypt and the Levant may not come as a surprise, but those with Italy and central and northern Europe are very exciting. These finds lend strength to the hypothesis about major migration taking place around 1200 BC, the so-called Sea Peoples. Recent analyses of Swedish bronze objects from this period, led by Johan Ling, reader (docent) at the University of Gothenburg, suggest that bronze was imported from Cyprus,’ says Fischer.

For four seasons, Peter Fischer has headed The New Swedish Cyprus Expedition. The expedition will continue in spring 2014. The excavation team 2013 consisted of 24 professional archaeologists and students from Sweden, Austria, Cyprus, Germany, the Netherlands, Iceland, Italy, Poland, Switzerland and Jordan.”