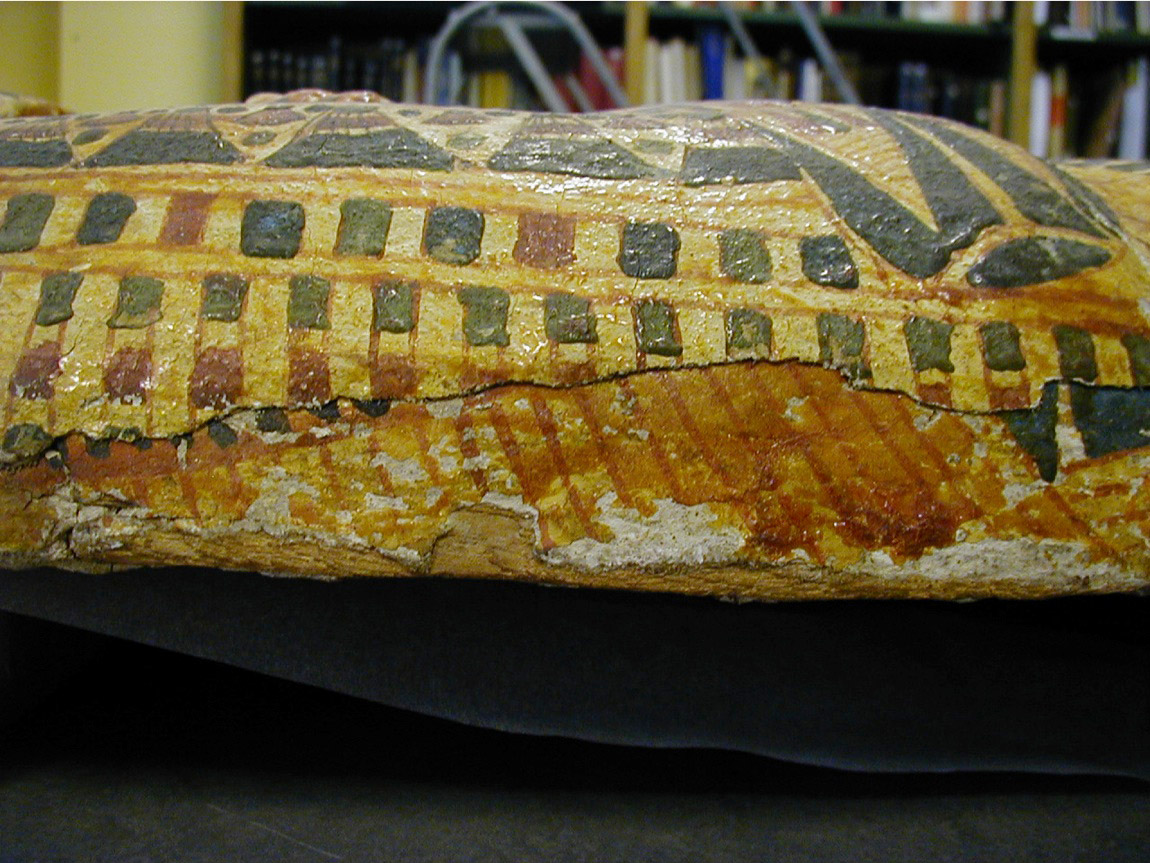 Coffin Reuse in the 21th Dynasty

During a time of economic and social crisis, the act of reusing, repairing and recycling describe one of the most convenient ways for people to continue leading a decent lifestyle similar to the one they used to lead “in the good old days”. To the ultimate believers of the afterlife, the ancient Egyptians, the above statement was applicable to the way they were treating their dead as lifestyle would extend beyond the grave!

The 20th Dynasty after the reign of Ramesses III and the following 21st Dynasty were indeed periods of economic and political disindegration Egypt. Poverty stroke the Egyptian society in such an extent that many Thebans -especially from Western Thebes- were pushed to reuse funerary equipment made earlier for their forefathers. Evidence from Deir el Medina suggests that families from there recommodified many of the older funerary objects in their own family tombs. Several aspects of this phenomenon form the research subject for Dr. Kara Cooney, an Egyptologist from the University of California Los Angeles (UCLA).

“I am currently working my way through many of the 800 or so 21st Dynasty coffins spread about the globe, and thus far, I have been startled to find that over 50% of 21st Dynasty coffins examined show evidence of reuse. The reuse of funerary arts represented a spectrum of possible appropriative actions. Some coffin reusers inscribed a new name. Others put in a new name and redecorated parts of the coffin lid. Others went further and redecorated all surfaces, over the old plaster and paint. Some went the extra step to scrub away old plaster and paint before starting new decoration, but they retained the old modeling in the wood. Some, I suspect, scrubbed the coffin down, dismantled it, and started a new coffin from scratch, using only the wood and thus giving away no trace of an older coffin visible except by means of further scientific examination”, explains Dr. Cooney.

The problematics of this research are both technical and ideological. Besides the different techniques used to re-appropriate an old coffin, the reuse in its details seems to contradict the Egyptian beliefs regarding respect to the dead. Reusing a coffin would imply opening the tomb of a relative, removing his body from the coffin, then erasing his name off it and replacing it with the newly deceased’s name. Appauling as it may seem,  such a practice might reflect a change of ideas regarding the dead or simply that moral code was not essentially followed in reality.

“[Egyptians] only openly discuss the practice of reuse in very negative terms – like the Tomb Robbery Papyri that document the torture and interrogation of men accused of stealing coffins or reusing temple wood to make coffins, or as we see in tomb curses which condemn anyone who harms the monument to a horrible end”, explains Dr. Kooney.

On the other hand, “during the 21st Dynasty (and probably during many other time periods), the Egyptians were able to de-fetishize these objects. They were able to separate the coffin from the essence of one dead body and modify it for another. It is difficult to understand how the ancient Egyptians were able to break the link between the person and this sacred thing. I suspect there were magical spells and rituals involved to keep the dead at peace before and after they were removed from the container, but the Egyptians did not leave any such information preserved for us”, Cooney adds in her report at the ARCE website.

“The motivation to acquire a coffin seems to have been so great that reuse rates skyrocket in Dynasty 21 as access to resources plummets. Much of this was ideologically driven: The dead needed ritual transformation, and the elite Egyptian mindset demanded materiality to create that transformation through a complicated set of funerary rituals that included the Opening of the Mouth ceremony. But the reuse was also economically driven. Access to high quality wood from the Lebanon or elsewhere was impossible, and people had to look elsewhere for this most basic coffin resource. Social drivers were also essential: Funerary rituals took place in a public or semi-public forum, inviting an intertwined socioeconomic agenda. The families of the dead wanted to display their social place to the world, and they needed funerary materiality to do it.

“Some Egyptologists may consider coffin reuse to be an immoral crime that happened rarely, but the ancient Egyptians may have considered the non-performance of ritual transformation for those who had just died to be an egregious cultural and social failure. Coffin reuse was a creative negotiation of this economic-social-religious crisis. In other words, it was not the reuse of a coffin that was aberrant; if anything was aberrant, it would have been refusing to provide the recently deceased with transformative ritual activity by means of funerary materiality, just because there was no access to wood that had not been previously used”, concludes Dr. Cooney.