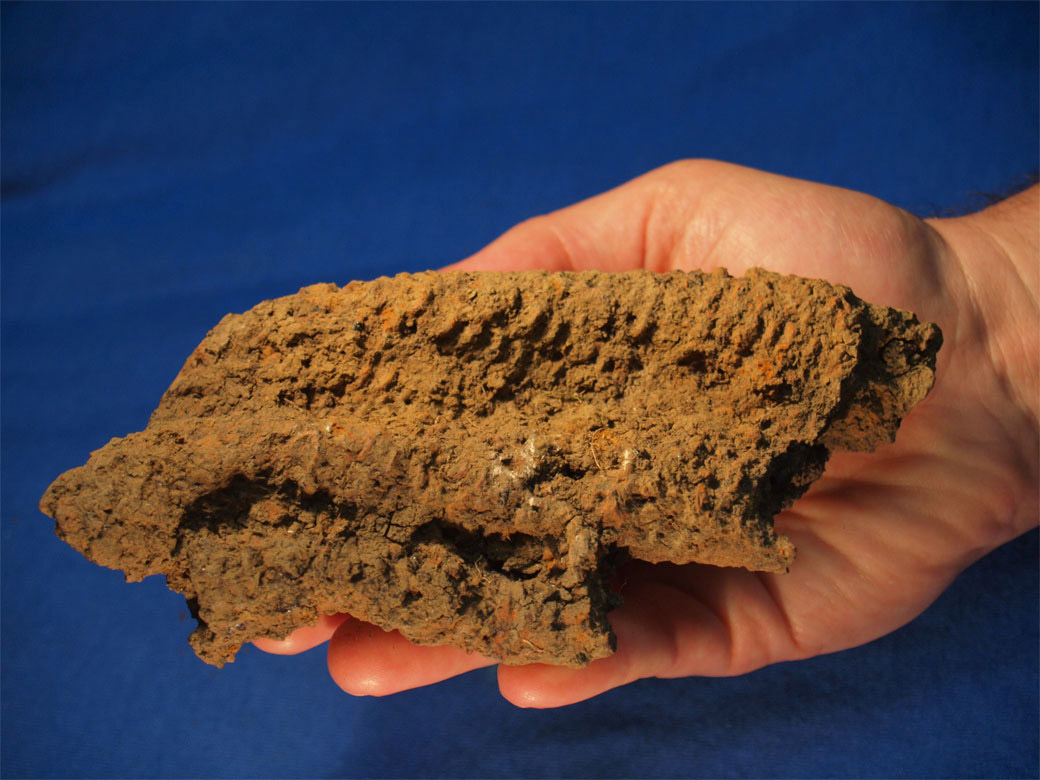 Archaeologists from Freie Universität Berlin  headed by Prof. Dr. Michael Meyer, found the chain mail of a 3rd century AD Roman soldier. The discovery took place during the survey of a Roman-Germanic battlefield at the Harzhorn, near Kalefeld in the Northeim district north of Göttingenin (Lower Saxony, Germany).

It was the first time that such a well-preserved piece of body armour was excavated on a Roman-Germanic battlefield. This find made it possible to reconstruct an individual story in the battle, a close-up image of the war, said Michael Meyer, a professor of prehistoric archaeology at Freie Universität Berlin.

Located on edge of battlefield

The chain mail, which was found in several fragments, consists of thousands of small chain links with a diameter of about six millimetres. The iron in the rings, however, is largely decomposed. Chain mail was worn in battle by Roman soldiers of various ranks. Germanic warriors usually waived this protection; however, in Germanic burial grounds, remains of those laboriously produced armour can often be found. In this case, not only the object itself was an unusual find, but also the position in which it was found. It was located directly on the edge of the battlefield with probably the most intense combat action that could be detected on the Harzhorn hill.

“This discovery represents something fundamentally new for the Battle at the Harzhorn,” said Michael Meyer. “This is the first time that an almost complete part of personal armour was found.” According to Meyer, it is possible that the chain mail was stripped from a wounded Roman soldier by his comrades because they wanted to dress his wounds and carry him away from the battle zone. It is conceivable that they left the chain mail behind. However, it is also conceivable that it was specifically laid down in a certain place by Germanic soldiers after the fighting was over, as an indication that this location played a special role in the fighting.

The excavations this year were done on the edges of the main battle zones. The archaeologists wanted to ascertain how far the battles extended and whether different fighting locations could be identified that belong together or whether they were all isolated clashes. This Roman-Germanic battlefield is one of the best preserved sites of the Roman-Germanic conflict. Its discovery in 2008 was a sensation because until then it had been assumed that after the Battle of the Teutoburg Forest (Varusschlacht in German) in 9 AD there was no further Roman military presence in Germania. The site of the battle in the 3rd century has been studied since 2008 Michael Meyer, the head of the excavation, and his team, in cooperation with the state Department of Archaeology in Lower Saxony (Niedersächsischer Denkmalpflege) and the archaeologists of the district of Northeim.

The chain mail is currently being exhibited in a Lower Saxon state exhibition entitled “Rome’s Forgotten Campaign: The Battle of the Harzhorn,” which opened in the State Museum in Braunschweig on September 1, 2013, and will run through January 19, 2014. The exhibition includes a comprehensive selection of the 2,700 objects found during five years of excavation. Numerous loans from ten European countries are also on display, adding more context about the Roman-Germanic history of the crisis-ridden 3rd century.