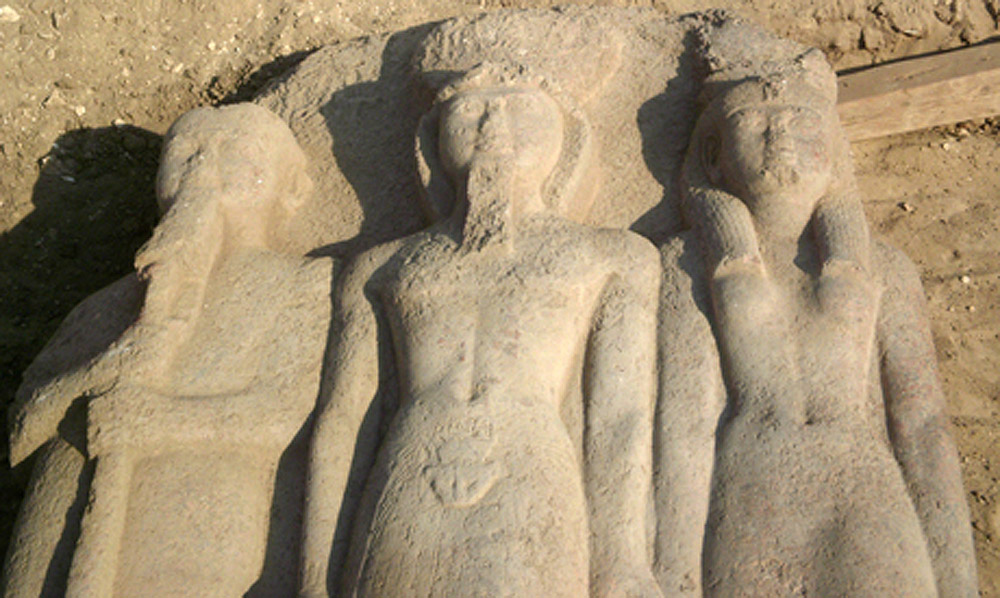 Part of a triad where the king is surrounded by gods

The representation is part of a “triad” where Ramesses is  standing between the goddess Hathor and the god Ptah. On its back, a hieroglyphic text and the cartouche of the king are engraved.The group statue measures 195cm high and 160cm wide.

The group statue was found accidently during a routine excavation, in the so-called Great Temple area’s eastern side, inside the temple of cat goddess Bastet in Sharkiya’s Tell Basta.

Mohamed Abdel Maqsoud, head of the Ministry of State of Antiquities’ (MSA) Ancient Egyptian department, added that the mission uncovered another statue carved in sand stone which depicts a yet-unidentified New Kingdom top official. A hieroglyphic text offering the statue to the goddesses Bastet and Sekhmet, while the god Horakhti is engraved on its back. This statue is 35cm in height and 25cm in width, according to Abdel Maqsoud.

“This is a very important discovery that sheds light on the history of Tell Basta in general and on this area in particular,” Abdel Maqsoud told Ahram Online. He added that the discovery, in addition to previous finds in the area, suggests that Tell Basta was once home to a New Kingdom temple dedicated to King Ramses II, which might be uncovered in the future.