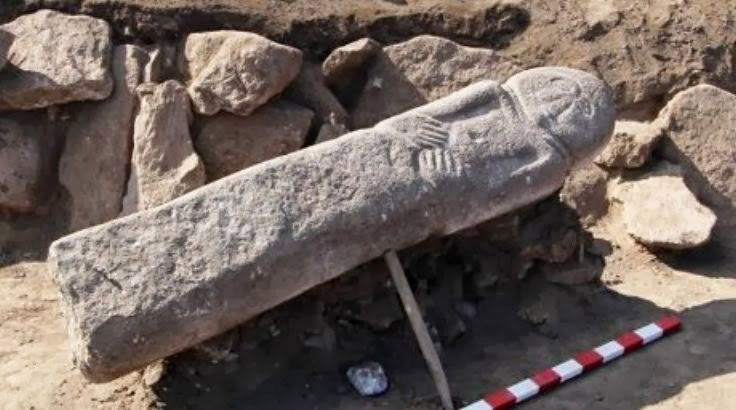 Archaeologists from Kazakhstan, under the supervision of Arman Baissenov have discovered a granite sculpture near the central Asian country’s city of Karaganda. The unusual sculpture resembles the Scythian monuments of the Black Sea region. The sculpture has been dated to the 8th century BC, an era that represents the early stages of cultural domination of the nomadic Saka tribe (early Saka period), making the archaeologists believe that this discovery is yet another confirmation of a direct link between the ancient tribes that lived in Eastern Europe and Central Asia.

“We found a circular mound of 34 meters in diameter at the base and height of 2.5 meters,” Beissenov said. “We were working for two months. The granite sculpture was discovered a week after we started the excavations. It was laying at the entrance of the mound. It mush have been installed in the eastern part of the tomb and fell down, most probably back during the ancient times, as we found around 30 centimeters of grass underneath the sculpture.”

According to him, the sculpture was not covered by soil. It was just standing on the side of the tomb surrounded by rocks. “That was a good location. Had it been placed at the top of the tomb, it wouldn’t have made it to our days. Back in the 1960s, when the historical heritage was destroyed, tractors would have removed and damaged it,” he explained.

The archaeologist says that the sculpture resembles a woman, even though she has no breasts. “And, most important, there is no military ammunition: belt, knife, etc. You can clearly see her eyes, nose, mouth, head and ears. There are two parallel lines on the neck to show that the woman had wearing a decoration on her neck. This means that she was one of the nobles, not just some housewife. Apparently she was some ruler, head of the tribe or the wife of the local ruler,” Beissenov said.

For a most precise dating, the find will have to undergo a radiocarbon analysis in Europe. However, the procedure might be delayed due to its high costs.