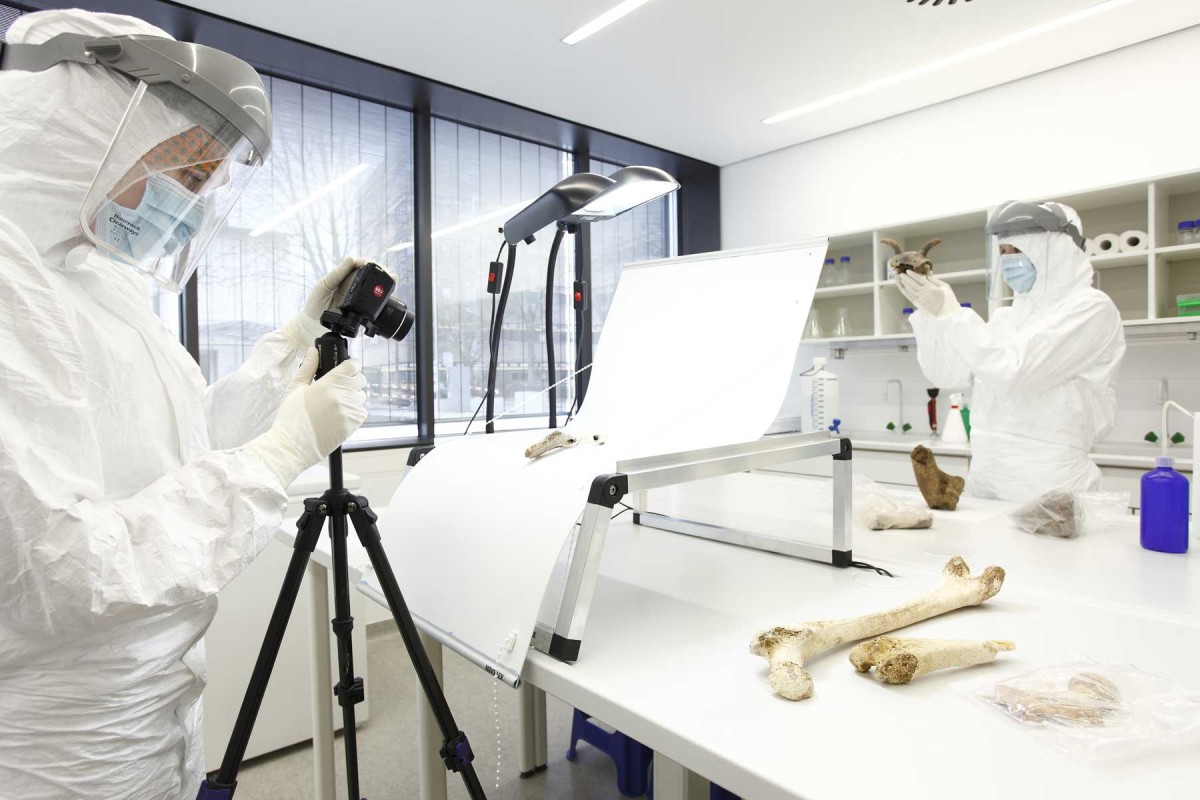 Hunter-gatherers lived in parallel with the immigrant farmers

For at least 2,000 years in Central Europe

Indigenous hunter-gatherers and immigrant farmers lived side-by-side for more than 2,000 years in Central Europe, before the hunter-gatherer communities died out or adopted the agricultural lifestyle. The results come from a study undertaken by the Institute of Anthropology at Johannes Gutenberg University Mainz (JGU) that has just been published in the eminent journal Science. A team led by Mainz anthropologist Professor Joachim Burger studied bones from the ‘Blätterhöhle’ cave near Hagen in Germany, where both hunter-gatherers and farmers were buried.

“It is commonly assumed that the Central European hunter-gatherers disappeared soon after the arrival of farmers,” said Dr. Ruth Bollongino, lead author of the study. “But our study shows that the descendants of Mesolithic Europeans maintained their hunter-gatherer way of life and lived in parallel with the immigrant farmers, for at least 2,000 years. The hunter-gathering lifestyle thus only died out in Central Europe around 5,000 years ago, much later than previously thought.”

Until around 7,500 years ago all central Europeans were hunter-gatherers. They were the descendants of the first anatomically modern humans to arrive in Europe, around 45,000 years ago, who survived the last Ice Age and the warming that started around 10,000 years ago. But previous genetic studies by Professor Burger’s group indicated that agriculture and a sedentary lifestyle were brought to Central Europe around 7,500 years ago by immigrant farmers. From that time on, little trace of hunter-gathering can be seen in the archaeological record, and it was widely assumed that the hunter-gatherers died out or were absorbed into the farming populations.

The relationship between these immigrant agriculturalists and local hunter-gatherers has been poorly researched to date. The Mainz anthropologists have now determined that the foragers stayed in close proximity to farmers, had contact with them for thousands of years, and buried their dead in the same cave. This contact was not without consequences, because hunter-gatherer women sometimes married into the farming communities, while no genetic lines of farmer women have been found in hunter-gatherers. “This pattern of marriage is known from many studies of human populations in the modern world. Farmer women regarded marrying into hunter-gatherer groups as social anathema, maybe because of the higher birthrate among the farmers,” explains Burger.

His palaeogenetics team is a worldwide leader in the field. For the study published in Science, the team examined the DNA from the bones from the ‘Blätterhöhle’ cave in Westphalia, which is being excavated by the Berlin archaeologist Jörg Orschiedt. It is one of the rare pieces of evidence of the continuing presence of foragers over a period of about 5,000 years.

For a long time the Mainz researchers were unable to make sense of the findings. “It was only through the analysis of isotopes in the human remains, performed by our Canadian colleagues, that the pieces of the puzzle began to fit,” states Bollongino. “This showed that the hunter-gatherers sustained themselves in Central and Northern Europe on a very specialized diet that included fish, among other things, until 5,000 years ago.”

The team also pursued the question of what impact both groups had on the gene pool of modern Europeans. Dr. Adam Powell, population geneticist at the JGU Institute of Anthropology, explains: “Neither hunter-gatherers nor farmers can be regarded as the sole ancestors of modern-day Central Europeans. European ancestry will reflect a mixture of both populations, and the ongoing question is how and to what extent this admixture happened.”