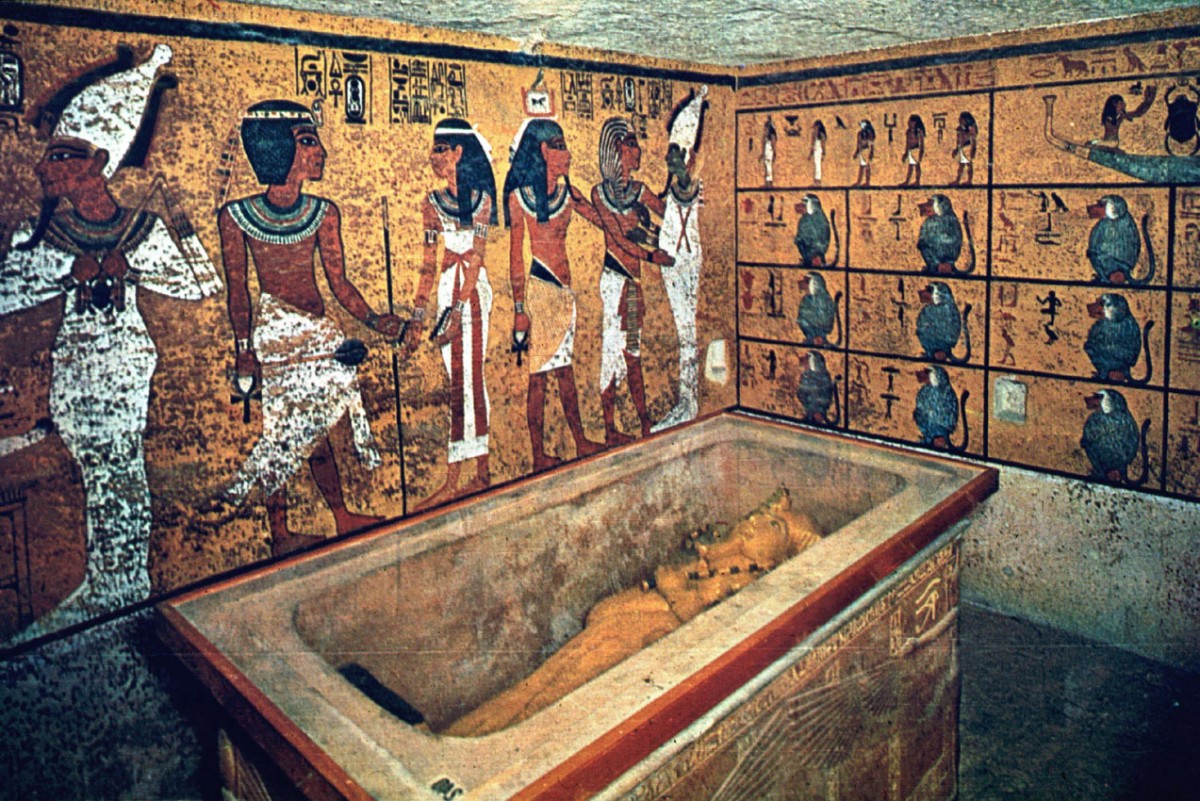 Exact copy will be near the Valley of the Kings, site of the original tomb

Visitors to the Valley of the Kings in Egypt will soon be touring a replica of King Tut’s tomb rather than the real thing. The installation of an exact copy is now scheduled to begin in January 2014, with an opening to the public expected in April.

King Tutankhamun, like all prominent ancient Egyptians, hoped that people would remember him forever, calling out his name into eternity. And, he seems he gratned his wish. Since British archaeologist Howard Carter discovered his tomb in 1922, countless thousands of tourists have come to visit, descending a flight of stairs and a sharply sloping corridor to arrive at the painted burial chamber.

And therein lies the problem. As breathtaking as a visit to the tomb may be, people eventually have to breathe. And with each breath, they exhale bacteria, mold, and moisture.

In one day 400 visitors can leave behind an ounce of vapor. Add body heat and the warmth from light bulbs, and the 1,182-square-foot (109.83-square-meter) space turns almost tropical.

That’s an unhealthy environment for any work of art, let alone murals that are more than 3,300 years old. It’s doubly challenging for murals that were compromised from the start. When Howard Carter opened King Tut’s burial chamber, he found that spots of mold had stippled the scenes on the walls. Experts think the room may have been sealed before the plaster and paint were dry, allowing mold spores to grow.

Detailed Match of the Original

The four chambers that make up Tut’s tomb were never meant for anyone to see. They lie some 26 feet (8 meters) below ground, in a secluded valley whose rocky cliffs were supposed to discourage looters.

Like the other pharaohs of his era, King Tut built a mortuary temple in the desert close to the green irrigated fields along the Nile. That’s where relatives, friends, and priests would go to call out his name, and to leave gifts such as bread, beer, wine, and flowers that he might enjoy from the great beyond.

The replica of the tomb will be installed near the area of the mortuary temples, next to the house that Howard Carter constructed at the entrance to the Valley of the Kings. Now a museum, the house served as Carter’s headquarters during the ten years he spent cataloging the contents of King Tut’s tomb.

“The house and facsimile will work together as a visitor center,” explains Adam Lowe, founder of Factum Arte, the Madrid-based company that replicated the tomb.

Displays will include information about the effects of changes in temperature and humidity, of dust, and of accidental damage. “The aim is to involve people in understanding the problems of conservation,” says Lowe, “and to nurture a new relationship between the visitors and the long-term management of the [original] site.”

Factum Arte began work on the tomb in 2009, using high-resolution 3-D laser scanners to capture the texture of the walls as well as the colors of the paint. The collected data were used to re-create the rough surface of the walls in resin. That surface was then covered with a flexible skin bearing the images, which were printed in layers to exactly match colors and tones.

The result is a copy of the tomb that faithfully re-creates every detail—even the dark spots of mold.

Hopes for a Tourism Uptick

The project to build the replica tomb was conceived well before Egypt’s 2011 revolution, at a time when tourists were still touring the Nile in large numbers. In the record year of 2010, Egypt welcomed nearly 15 million visitors from abroad. That number fell by more than 40 percent the following year, representing several billion dollars in lost revenue.

Though tourists are now starting to return, they’re mostly headed to beach resorts along the Mediterranean and Red Sea. The sites of ancient tombs and temples remain largely deserted. But Egyptians are hopeful that once stability is restored, tourists will flock back. And when that happens, King Tut’s replica tomb could be a major attraction.

Will it draw the same crowds as the real thing? Quite possibly, if the success of reproduced caves in Europe is any indication.

“If you look at Altamira, the prehistoric cave in Spain, people do come to see a replica,” says Salima Ikram, a professor of Egyptology at the American University in Cairo (AUC). “They understand that the original is being protected when they tour this absolutely perfect facsimile, and it’s OK.”

Visitors will likely appreciate other aspects of King Tut’s replica tomb as well. In the original, people stand in the antechamber, behind a railing, and peer into the burial chamber from a distance. In the replica, visitors will be able to inspect every inch up close. They’ll also see all four walls—not possible in the original—in addition to a restored portion of a wall that Carter had to break through to get into the burial chamber.

Visitors also will be able to examine a copy of King Tut’s monumental quartzite sarcophagus, adorned by sculpted bands of hieroglyphs and a graceful winged goddess at each corner.

The location of this replica is a key part of the experience, too. It’s about one and a half miles (two and a half kilometers) from the tomb itself, at the base of the same rocky escarpment. “Having the replica in an area close to the original gives you a sense of the geology and geography of the landscape into which the tomb was set,” says Ikram, a National Geographic grantee.

The replica is now in storage at AUC. In December it will be moved up the Nile from Cairo to Luxor in preparation for its installation. Though Egypt’s current political troubles have delayed the project, officials hope that it will help encourage tourists to return, and to continue calling out King Tut’s name into eternity.