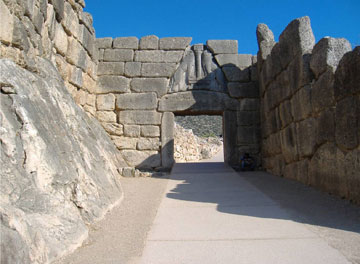 Evidence on the catastrophy that brought the Dark Ages on, from the bottom of the Sea of Galilee

A study of fossil pollen particles in sediments extracted from the bottom of the Sea of Galilee has revealed evidence of a climate crisis that traumatized the Near East from the middle of the 13th to the late 12th century BCE. The crisis brought about the collapse of the great empires of the Bronze Age.

“In a short period of time, the entire world of the Bronze Age crumbled,” explains Tel Aviv University archaeologist Prof. Finkelstein. “The Hittite empire, Egypt of the Pharaohs, the Mycenaean culture in Greece, the copper producing kingdom located on the island of Cyprus, the great trade emporium of Ugarit on the Syrian coast and the Canaanite city-states under Egyptian hegemony – all disappeared and only after a while were replaced by the territorial kingdoms of the Iron Age, including Israel and Judah.”

The researchers drilled through 300 meters of water in the heart of the Sea of Galilee and retrieved a core of sediments 20 meters long from the bottom of the lake. The goal was to extract from the sediments fossil pollen grains. “Pollen is the most enduring organic material in nature,” explains Finkelstein’s colleague Dr. Dafna Langgut, who carried out the actual work of sampling. “Pollen was driven to the Sea of Galilee by wind and river-streams, was deposited in the lake and was embedded in the under-water sediments. New sediments that are added annually create anaerobic conditions which help preserve the pollen particles. These particles tell us about the vegetation that grew in the vicinity of the lake in the past and therefore testify to the climatic conditions in the region.”

The chronological framework of the sediment core was established by radiocarbon dating organic materials that were preserved in the sediments. The counting and the identification of the pollen grains revealed a period of severe droughts between ca. 1250 and 1100 BCE. A core of sediments from the western shore of the Dead Sea – also studied by the research group – provided similar results.

“The advantage of our study, compared to pollen investigations carried out at other locations in the Near East, is in the unprecedented resolution of a sample about every 40 years,” says Prof. Finkelstein. “Pollen is usually sampled in a resolution of several hundreds of years, and this is indeed logical when one is interested in prehistoric matters and glacial and inter-glacial cycles. Since we were interested in historical periods, we had to sample in denser resolution; otherwise a crisis such as the one at the end of the Bronze Age would have escaped our attention.” Another novelty in the current research is in the chronological correlation between the pollen results and two other records of the past. At the end of the Bronze Age many Eastern Mediterranean cities were assaulted and destroyed by fire. The dates of these events indeed fall between ca. 1250-1100 BCE. The same holds true for ancient Near Eastern written documents that testify to severe droughts and famine in exactly the same period. Such documents are known from across the entire region – from the Hittite capital in Anatolia in the north, via Ugarit on the Syrian coast and Aphek in Israel to Egypt in the south. Reduction in precipitation in the “green” areas of the Near East should not be expected to cause the collapse of great empires.

So what had happened?

Prof. Ronny Ellenblum of the Hebrew University in Jerusalem studied written documents that describe similar conditions – of severe droughts and famine – in the 10th‒11th centuries CE. He showed that in the northern parts of the Near East, such as northern Iran and Anatolia, shrinkage in precipitation was accompanied by devastating cold spells that destroyed crops. Langgut, Finkelstein and Litt propose a similar process for the end of the Bronze Age: Severe cold spells destroyed the crops in the northern parts of the ancient Near East and shrinkage in precipitation damaged agricultural output in the eastern steppe parts of the region. This brought about the droughts and famine so well-described in the ancient texts, and motivated “large groups of people to start moving to the south in search of food,” says Egyptologist Shirly Ben-Dor Evian of the Department of Archaeology at Tel Aviv University.