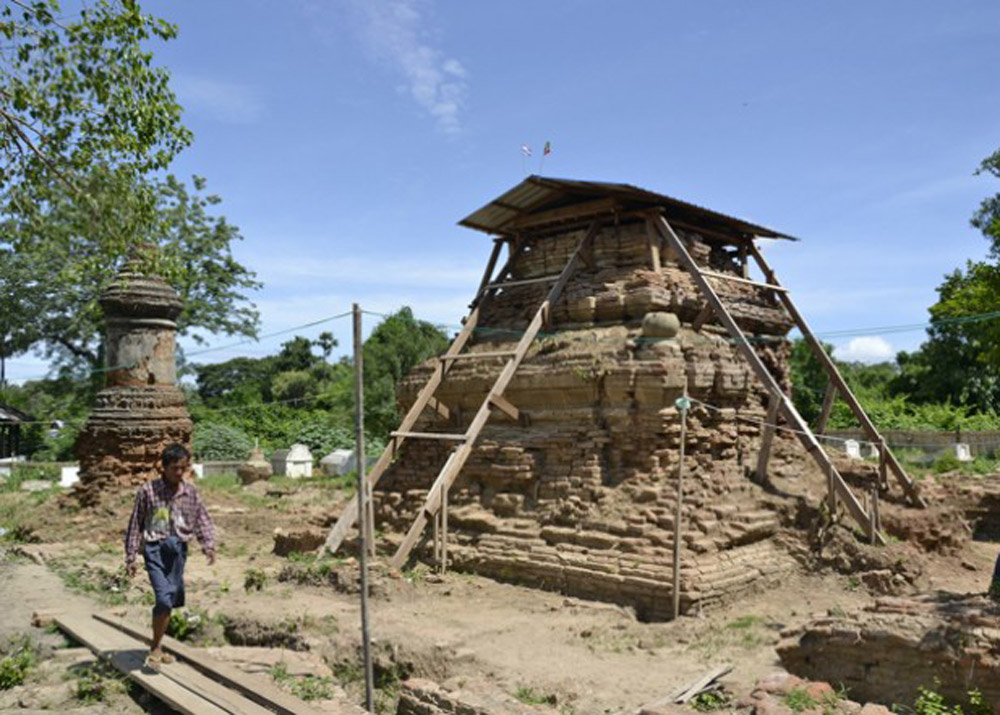 Archaeologists say they have discovered the remains of a monastery building buried beneath the historic tomb of a former Siamese king in Mandalay Division, Burma (Myanmar).

The tomb of King Uthumphon, in the well-known Linzin Hill graveyard in Amarapura Township, has been under excavation since February.

Mickey Heart, a historian who leads the excavation team, said the foundations show the monastery building was about 18 meters wide, while the monastery compound was about five acres.

“We still can’t say exactly which abbot resided in this, but since it was situated near the pagoda built by the Thai king, it could have been the place where Thai abbots were living,” he told The Irrawaddy.

According to Burmese history records, Uthumphon was originally brought to Mandalay Division in the 18th century as a prisoner of war. He was captured by the third king of Burma’s Konbaung Dynasty, Hsinbyushin, who invaded the ancient Thai capital of Ayutthaya in 1767 and returned to his own capital, Ava, with as many subjects as possible. The Thai king, who was in monkhood, died in captivity and was buried at Linzin Hill.

Dr. Tin Maung Kyi, a Burmese historian who lives in Mandalay, agreed that it was unclear which abbots once lived at the site.

“We can’t say that this monastery belonged to King Uthumphon,” said Dr Tin Maung Kyi. “Other abbots may have resided there.”

The abbots may have lived during the reign of King Bodawpaya (AD 1782-1819), the sixth monarch of the Konbaung Dynasty, he said.

Meanwhile, the 100-person excavation team also plans to establish a museum around Linzin Hill that reflects the culture and daily life of the Thai people who lived in Mandalay during the 18th century.