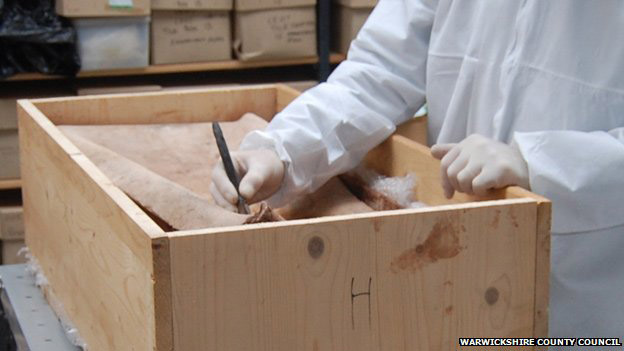 Several aspects of Romano-British culture to be revealed

A coffin believed to contain the remains of a child and dating back more than 1,600 years has been opened by scientists

Made of lead, the coffin was discovered last month in a field in Witherley, west Leicestershire. Scientists said they hoped it would reveal more about the culture of Roman Britain and even Romans’ diets. They had previously used an endoscope to probe inside the coffin, but said it was “almost entirely full of clay silt”. Stuart Palmer, from Archaeology Warwickshire, which is leading the work, said the contents could also show more about burial rites, clothing, disease and even drug use at the time.

The identity of the deceased, believed to be a child, is expected to be confirmed later this week, when the tests’ results will be available.