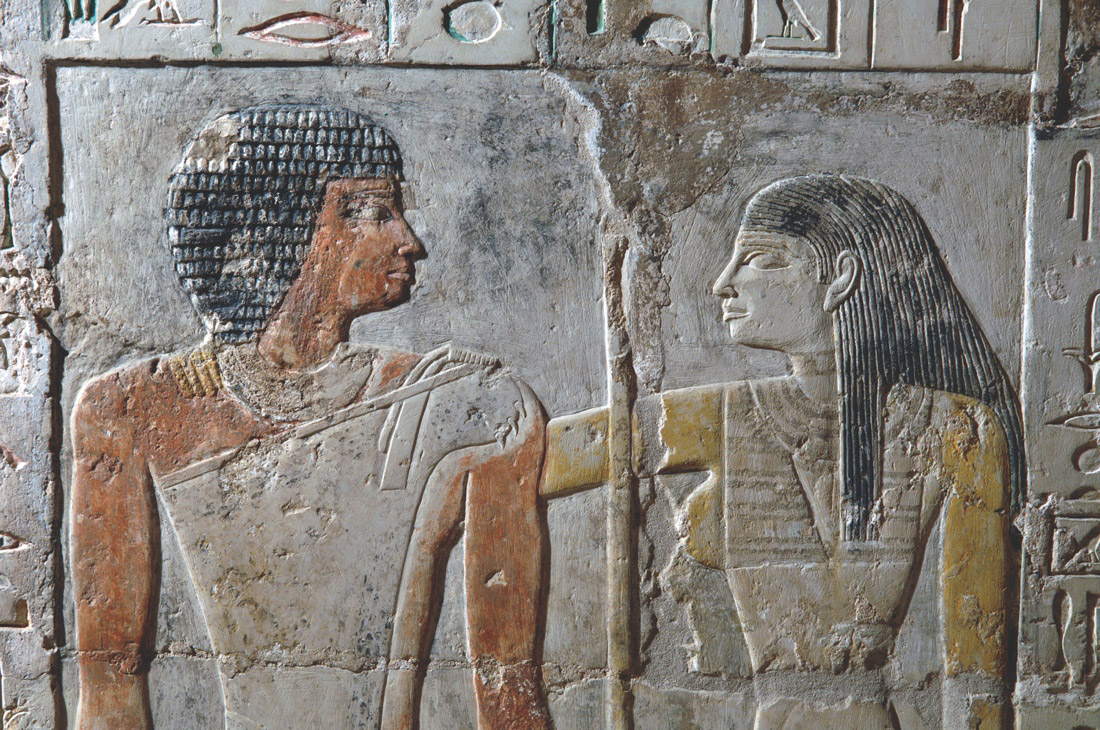 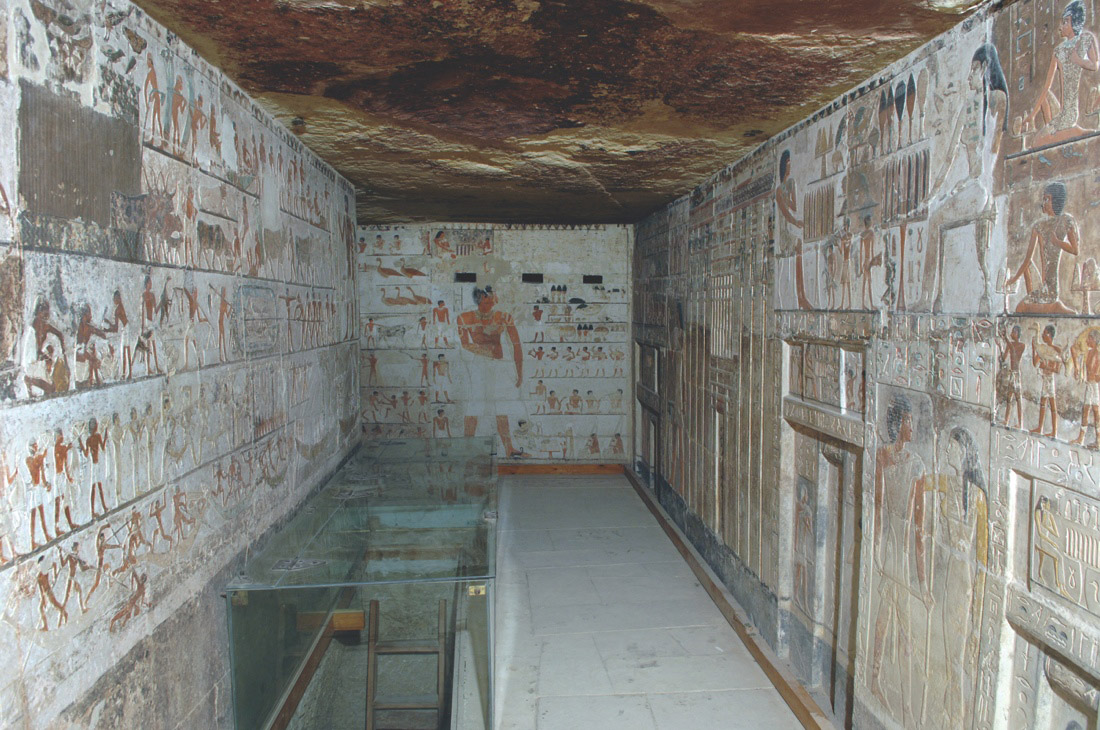 Scenes from a Marriage in Full Colour

They lived about 4,400 years ago in an age when pyramids were being built in Egypt. Their life was full of music. Their marriage was blessed with love, respect and many children and grandchildren, but it was also marked by a tragedy -the loss of a son.

She was a priestess named Meretites, and he was a singer named Kahai, who performed at the pharaoh’s palace. Their tomb at Saqqara — which held this couple, their children and possibly their grandchildren — has now been studied and described by researchers at Macquarie University’s Australian Center for Egyptology.

A series of scenes in relief depicting tomb owners, royal court singer Kahai and priestess Meretites, show the couple gazing into each other’s eyes, with the lady placing her right hand over her husband’s right shoulder. Such a display of affection was extraordinary for Egypt during the Pyramid Age. Only a few examples of a face-to-face embrace survive from the Old Kingdom (2649 B.C. to 2150 B.C.), the time period when the couple lived and pyramid building thrived, said Miral Lashien, a researcher at Macquarie University. “I think that this indicates very special closeness,” Lashien told LiveScience in an email, admitting however that this kind of embrace was not limited to romantic love; one of the few other similar embraces known from Pyramid Age Egypt shows two men who were likely twin brothers.

In the scene, Kahai is wearing a wig, a collar over his shoulders, kilt, bracelets and leopard’s skin. He also is holding a staff and scepter, which serve as symbols of authority and responsibility probably related to his rise to the position of singing director, Lashien said. Meretites’ wardrobe includes a long wig, choker and broad collar, bracelets and a long, tight dress with shoulder straps that appear to leave a breast exposed, according to the fashion of the time.

This scene, along with other works of art recorded in the tomb, suggest that women in Pyramid Age Egypt enjoyed a greater level of equality than some scholars believe. “The tomb of Kahai is an example of the importance of women,” wrote Lashien. “The frequency of their representations and the equal size to their husbands or brothers suggest equal status.”

The tomb itself was discovered in 1966 and published in a book in 1971 mainly in black-and-white images. Scientists returnedto the tomb in January and February of 2010 to study and document its artwork in full color. “This tomb is one of the most colourful examples of Old Kingdom art and certainly deserves a full-color publication,” Lashien writes in her recently published book, “The Chapel of Kahai and his Family” (The Australian Centre for Egyptology: Reports 33, 2013).

When the tomb was discovered in 1966, mummified remains were found in it, but it is not certain if they belonged to the family members. Egyptians in later periods often reused the tombs of those who had lived before them.

Archaeological and artistic evidence indicates the tomb was built during or shortly after the rule of King Niuserre (2420 B.C. – 2389 B.C.), who constructed his own pyramid just to the southeast of the Giza pyramids at a site now referred to as Abusir.

A family of singers

Kahai and his sons bear titles that indicate they worked as singers, with Kahai becoming the “overseer of singers of the two houses.” That title meant “the family was employed in the palace,” Lashien reports. “Probably, as a result, their tomb is particularly beautiful, being perhaps decorated by the royal artists,” she adds.

Indeed, the tomb art includes a colorful scene showing two people singing and musicians playing harps and flutes. Whether the musicians shown are family members or other individuals is unknown.

Despite his lofty title, Kahai would probably have kept on singing in addition to performing administrative duties, Lashien said. Looking at representations of musicians from the time period in which they lived, she said that, “We have no evidence of large music/singing groups which required a full-time director. The representations show small groups of two to five men and/or women playing string and wind instruments, with one or two singers.”

While the tomb itself doesn’t reveal the specific songs Kahai sang for the pharaoh’s family, the subject matter would, at least in some cases, have been cheerful. From other inscriptions, researchers know, for example, that the songs speak of the “pleasures of life, not different from today,” Lashien said in the email, noting that one song encourages people to “eat, drink and be merry.”

Though Kahai was apparently successful at his job, his life was not devoid of tragedy. When the team studied the tomb’s inscriptions they discovered that Kahai had to bury one of his adult sons, named Nefer. The tomb decorations include depictions of the young children whom Nefer left behind, and an inscription suggests that Nefer’s wife was pregnant at the time of his death.

But even when family members died, their survivors could take comfort in the belief that the tomb provided them with a way to keep in some form of contact. The tomb includes five “false doors” with images of the deceased that acted as a conduit of sorts between the world of the living and that of the dead. “Food was placed in front of the false door, and the Ka (life force) of the deceased was able to come out through the false door to receive the offerings and to enjoy the day,” Lashien said.