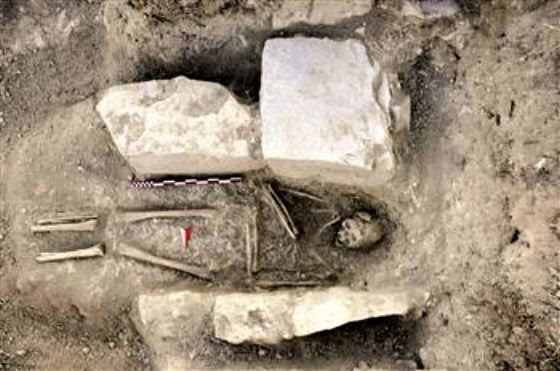 Human skeletons from the Byzantine era were found during excavations that have been continuing in Karabük’s Safranbolu (Greek Saframpolis) district for two years by Karabük University Archaeology Departnment members.

Associate Professor Şahin Yıldırım states, “We have found the oldest locals who lived in Safranbolu”.

Excavations started in 2011 in the 17-meter-high Göztepe tumulus. Research has stopped from time to time due to seasonal factors and financial problems, but was restarted with 10 workers and five archaeology students under Yıldırım’s leadership. During the excavations, the skeletons of two women and two men were recently found in the tumulus, which is thought to date back to the 4th century.

Yıldırım said the excavation area was a hill dating 2,500 years, adding, “We found the skeletons at the top of the hill. They were 50 meters underground. The first examinations show they belonged to two men and two women. We estimate that the grave is from the Byzantine era. These are Safranbolu’s oldest locals. The skeletons were sent to the laboratory for further examinations.”

He said excavations in the tumulus had started in 2011, and continued, “Efforts have been stopped, but started again one month ago thanks to the allocation provided by the General Directorate of Cultural Beings and Museums. This is a 17-meter-high grave. And we need to go down eight-nine meters more. We hope we will get information to shed light on the history of Safranbolu. As long as seasonal factors comply, we plan to get a results in 15-20 days.”