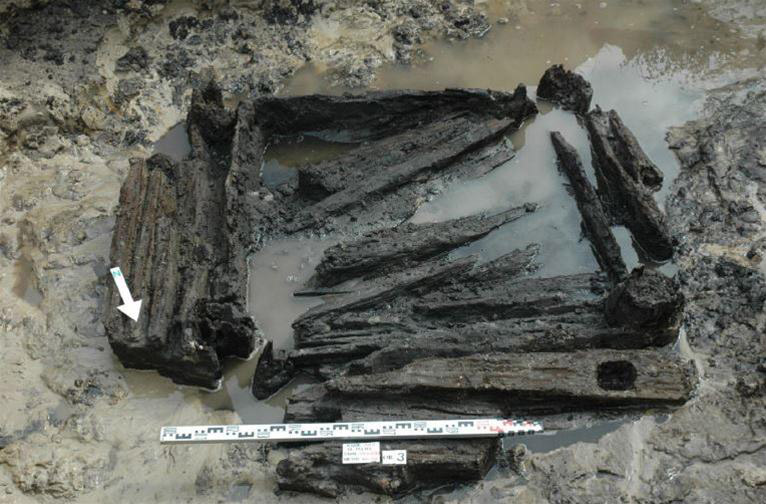 Evidence of metallurgy within the Przeworsk culture

An unusually designed well , a number of bloomeries for smelting and remains of half-dugouts were discovered by archaeologists in Kanie, Mazovia Voivodeship, Poland.

According to the researchers, the site perfectly fits the pattern of other known ironworks settlements located in the Błonie Plains in the western part of the region, and is is considered as the second largest centre of mass production of iron in the territories inhabited by the Przeworsk culture about two thousand years ago.

“We found 22 furnaces filled to varying degrees with slag pieces and residue and intense black burn, and two half-dugouts, which contained numerous pottery pieces”, says Robert Wereda of the Museum of Ancient Mazovia Metallurgy in Pruszków.

The well caught particular attention due to its design, which is unique not only in Mazovia, but perhaps also in the whole Poland.

“What distinguishes the well we have discovered from other such objects dating from the Roman period, is the use of vertical-post log design, which is characteristic of residential buildings, in the construction of timbering”,  said Wereda.

According to the excavators, the walls of rectangular wells were usually built using a horizontal laying of wooden beams and connecting them in corners. Wooden timbering parts were very well preserved due to the favourable conditions. Horizontal components in the well were handmade planks, probably oak, which were inserted in vertical grooves in four pillars stuck in the ground. Each pillar had two grooves and was tapered over a length of about 50 cm. The preserved height of timbering was about 1.30 m. The well’s bottom the well was lined with medium-sized stones and located at a depth of approximately 3.40 m from the surface, at the ground water depth. All structural components were very closely matched. Slots were filled with clay and birch bark, which inproved the tightness of the whole structure, according to the results of the meticulous work of archaeologists.

“In the immediate vicinity of the well we have also uncovered several pole holes, indicating the existence of a small surface building terrestrial with a pole structure, that provided roofing for the well”, said Wereda.

Archaeologists also discovered traces of what probably was a crane – in the form of a large pole hole – used to draw the bucket from inside the well. Archaeologists also note another important fact. Timbering had been strengthened with stones from the outside, which was a standard for similar discoveries.

“Perhaps the explanation for this state of affairs, or rather lack of it, is the use of vertical-post log design that did not require additional strengthening with stones and ensured proper functioning of the well”, proposed Wereda.

Inside the well, archaeologists found 20 pieces of various kinds of pottery. This was another surprise for the researchers. Most communities of the Przeworsk culture used old wells as garbage pits and filled them with broken pots and other waste. In the case of the well in Kanie, it appears that the well had been in use until the end of the functioning of the settlement , when it was deliberately buried.

Currently, wooden pieces of well timbering are kept in the Museum of Ancient Mazovia Metallurgy in Pruszków. Obtaining adequate funds will allow for their conservation and dendrochronological analyzes used for accurate dating.

The excavations were carried out in July. The work preceded the construction of the water supply system. Excavations were headed by Dorota Słowińska from the Stefan Woyda Museum of Ancient Mazovia Metallurgy in Pruszków.